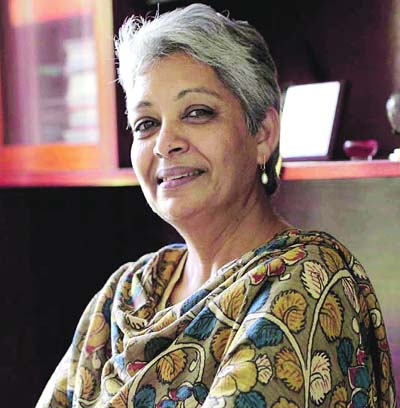 For the first time in the history of Delhi Police, a woman officer will occupy the crucial post of Special Commissioner of Police (CP), Administration. Vimla Mehra, the Director General (DG) of Delhi Prisons, is all set to step into the shoes of Bhim Sain Bassi as the number-2 in Delhi Police hierarchy. P Kamraj, currently holding the post of Special CP, Vigilance will be replacing Vimla Mehra as the new DG of Delhi Prisons.

Orders to this effect are most likely to be issued by the end of this week. With Kamraj moving as DG, Delhi Prisons and PN Agarwal, the Special CP, Security hanging his boots at the end of this month, decks will be cleared for the promotion of the 1988 batch Indian Police Service (IPS) officers as Special CPs. Dr Aditya Arya, the DG, Home Guards is superannuating on August 31.

Vimla Mehra, a 1978 batch IPS officer of the Arunachal, Goa, Mizoram and Union Territories (AGMUT), had served the Delhi Police in various capacities. Before taking over the reins of Tihar Jail, Vimla Mehra was the DGP of Arunachal Pradesh. Her posting to the Delhi Police will assuage the feelings of the many who wanted a woman officer at the helm after the brutal gang rape of a 23-year-old para-medical student.

As head of the administration of the country's most elite police force, Vimla Mehra will preside over many administrative meetings that can impact the safety and security of girls and women in the national Capital. She had taken over as DG Tihar in August 2012 and is said to have brought many administrative changes in making Tihar more prisoner-friendly. She was the second police officer to head Tihar administration as the DG after Dr Kiran Bedi, the first woman IPS officer in the country.

As DG Tihar, she has introduced many vocational programmes to train inmates in employment-oriented skills. The most significant change has been the introduction of foreign languages courses for the woman inmates and undertrials. Vimla Mehra also was instrumental in launching a dedicated helpline (1091) for women as the head of Crime against Women cell. She also envisaged the self-defence training programmes for the women. Woman police officers were made the Investigating Officers (IOs) of the cases during her tenure.

P Kamraj, the affable 1987 batch IPS officer, is going to replace Vimla Mehra as the new DG of Delhi Prisons. Kamraj had worked in many capacities in the Delhi Police and most important being his stints as the DCP, Traffic, DCP, South West and South district. He also served as Additional CP, Crime before moving to Central Bureau of Investigation (CBI). Kamraj was the Joint CP, South Eastern Range before his promotion as Special CP Vigilance. In another development, PN Agarwal the 1981 batch IPS officer is retiring on July 31st. Dr Aditya Arya, the 1981 batch IPS officer and holding the post of DG Home Guards is retiring on August 31 next. This will necessitate another round of reshuffle at the top level, sources said.