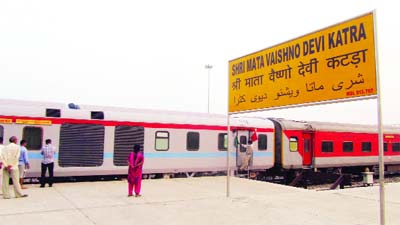 Hundreds of Katra-bound pilgrims on board Shri Shakti Express left stranded inside the railway tunnel in the wee hours of Wednesday after its engine developed a technical snag and delayed arrival of the special train for about two hours.

The scheduled arrival time of Shri Shakti Express, which runs between Delhi and Katra, is 5.10 am but on Wednesday the train came to a halt inside Tunnel no 27 as the engine developed some technical snag, few kilometers short of Katra. The train final reached Katra around 7  am, official sources said.

According to reports, the pilgrims could not step out of the train as it remained halted inside the tunnel till another engine was escorted to the location to ferry the pilgrims to their destination.

The first train between Katra and Delhi started its run on July 14. The Katra rail link was earlier inaugurated by the Prime Minister Narendra Modi on July 4, 2014.