life as we know it

life as we know it 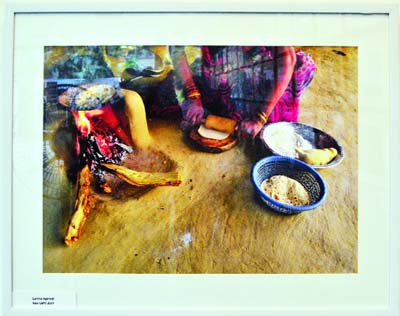 The old woman with wrinkled face and teary eyes looks at the sky. She sits near a tree at Chandni Chowk and continuously looks left and then right. She seems confused of the constant hustle around her and sits in a lethargic posture. Amitava Majumder has captured this scene through his camera in a black and white picture. “The woman covered her head and was constantly looking at people crossing the street. The moment she looked up in the sky, I saw an everlasting emotion and clicked it. It seemed as if she was seeking the meaning of human life from the powers high above. Her condition is like any of us. It is the same moment that we sometimes get into and ponder on our existence,” says Amitava, the photographer.

Many moments alike have been captured by young photographers and frozen in time. Delhi Photography Club with its exhibition series Nice Foto has provided a platform to enthusiasts to showcase their works. Garima Agarwal has contributed two pictures. Her pictures have been captured with thoughtfulness. On a surface level it is an usual sight of a woman making chapatis using belan (rolling pin) and chakla (flat circular rolling board), but on the other level it speaks of the actual status of human development in society. She explains, “I have titled this picture New Delhi 2014. The picture might be usual but it is unusual in a way that despite living in a so called posh area of south Delhi, the woman of today is still using firewood on a mitti ka chuhla. I have brought out the stark reality and living conditions of people in some quarters of our society. It is a comment on modern India, where one chunk lives with lavish comforts and the other has to sustain in poverty.”

In another picture, an old man is standing behind the poles holding a fence made with barbed wires. A few goats are grazing on the other side of this fence and the man is looking at the camera. The picture is black and white and the shadow on man’s face indicate the sun being in an overhead position. This picture is by Aman Agrawal, who says, “I went to a village situated near the Aravalli Hills near Sohna Road. It was a trip from college under a Sikhsha Abhiyan to promote education in villages. I saw this old man staring at us for nearly 15 minutes. The man in his rugged state wanted to convey something, his eyes and posture were saying more than he could have expressed. The sun was in all brightness and instead of talking to him I took out my camera and clicked a picture. At first, it was taken in colour but the black and white version of it looked brilliant. I titled the photograph as Just Another Usual Day and it is up to the viewers to interpret the meaning.”

Photographers like VP Singh and Deepali Gupta have also displayed their works. VP Singh also teaches photography and serves the underprivileged by imparting skills learnt through his experience. Deepali Gupta takes deep interest in wildlife photography and says that wildlife is not necessarily wild. She also mentions that if animals are to be compared to humans, there is a greater sense of calmness and peace around animals.