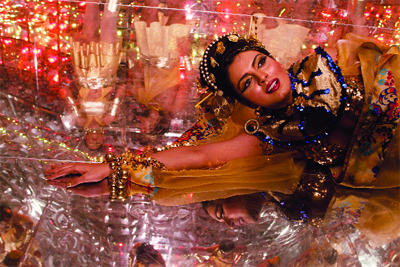 Niharika Singh won’t be a part of the ‘frivolous’ jamboree of Hindi movies. She wants to work on exceptionally brilliant films. By K Bhardwaj

You would easily expect Niharika Singh, lead actress of Miss lovely, to be on a movie-signing spree! And why notIJ Miss lovely hogged international headlines last year at Festival De Cannes and is now releasing in India, France and US in the coming months. The movie has already become the talk of town because of its adult content and blurred nude scenes. However, the former Miss India Earth (2005), is currently unemployed and that too by choice. After returning from Cannes, she headed straight to FTII to pursue film appreciation course. “It’s all because of the exposure that I got there. I think what we are doing in Bollywood is absolutely irrelevant. We are not exposed to the real cinema. Why is that we had only one Satyajit Ray despite being so much talent and platform in this countryIJ I don’t wish to be part of any brainless film. I would rather stay without work and travel out to learn more,” says the actor.

Having modelled for years, Bollywood was a natural choice to her. Initially she did whatever came her way. But nothing could beat destiny. None of her projects could materialise and what finally took off was Miss lovely, “the smallest” project among all of them. “I was naïve. I was doing everything. To begin with, I got a 10-film contract with Raj Kanwar. But he never started any film. John Matthew Arthur took me out of contract and we made A New love Ishtory but it also didn’t release. Then I signed Mud Mud Ke Na Dekh with Shree Ashtavinayak Cine Vision which was shelved. All these films including Miss lovely were happening at the same time. Finally, contrary to my expectations, Miss lovely turned out to be the biggest film of my career,” she laughs as she recalls the  events.

But now, the actor who has been in Mumbai for some time, has set her own conditions. She is more aware of her decisions and don’t want to be part of jamboree. “I will do excellent films only. I have rejected many mainstream films,” she says.

The actor, who will be seen playing a C-grade actress of sex-horror movies of 80s in Miss lovely, has reportedly given some steamy scenes. “What’s so scandalous in kissing anybody on screenIJ I have not given any nude scene, but what’s a problem in thatIJ Rape scenes and butchery on screen go unnoticed. Why don’t people talk about itIJ I find no harm in bold scenes if they are demanded by the scripts,” she says. Her next release would be Buddhadeb Dasgupta’s Anwar Ka Ajab Kissa opposite Nawazuddin Siddiqui, which has already been shot.