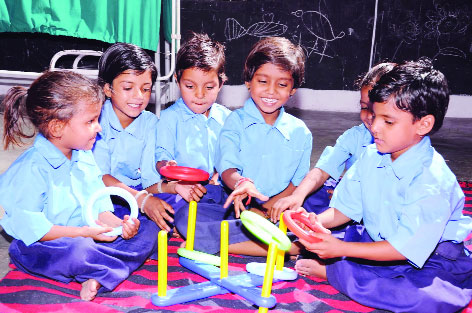 With many main schools starting pre-nursery classes, the decision to send your toddler to a pre-school or a main school has become even tougher. Before taking the final call, its best to balance out a few pros and cons, says Pooja Kedia

Divya met the admission counsellor at one of the leading pre-schools in the city a few days back. little to the counsellor’s knowledge Divya also met the admission officer of a leading main school in that same week. But, she only has one two-and-a-half-year-old daughter — wonder what was she doing at both these placesIJ She was trying to navigate a tough decision — whether to send her daughter to a pre-nursery at a pre-school or a Through School (Main School). She is not the only one!

Most pre-schools and main schools offer Nursery (making the latter a Main School - Pre-school through to Senior School). The decision to choose where to send your child for nursery was already a tough. With many Main Schools also starting pre-nursery, the decision has become even tougher. Before taking the leap and jumping to a conclusion on pre-school or main school, its best to balance out a few pros and cons.

The first point to consider is the age you are enrolling your child into a pre-nursery. So, is there a specific right age to take the first stepIJ  Indeed there is, a child at the age of 2-3 is ideal for oral learning.  At this stage a child can easily grasp story telling sessions, reading aloud by pointing at pictures or even words, reciting nursery rhymes and simply singing and dancing with children of the same age group.

Pre-nursery at a Pre-school

Since pre-schools are only for a similar age group, your child is likely to be at ease within similar age children. However, advocates of the Montessori methodology may disagree with this as they believe a mixed age group environment encourages children to open out faster.

Pre-schools are also built on a smaller campus making the environment less daunting for some children. Since through schools are bigger in size, it can be an overwhelming experience for the little one. You know your child better and you need to see whether he/she would comfortably adjust or simply get frightened.

The biggest support of a pre-school for pre-nursery is that it’s singular focus on Specialised Care for Young Children. While, the attention and focus of a through school is spread across its various programmes and grades, the pre-school only deals with children and parents of young children, making it a bit more comforting for many parents.

Though, for parents with children already enrolled in a pre-school, a compelling reason for choosing a through school over continuing with the pre-school is when the pre-school is not equipped to go beyond a playgroup or simply has fewer kids to promote peer learning.

Pre-Nursery at a Main School

Coming to a main school, bearing in mind the entry to 'the through school' of your choice starts at pre-nursery, and it's a sought after school in the city and you are dead set on that school then there is little else to consider. But, if you have decided to not follow the herd or are not so rigid with the choice of school then read on for more tips.

While the environment of the big school can be overwhelming, the process of shuttling from a pre-school to a new environment just when things looked more settled can be equally bad especially for the child. Having said that, most children adjust sooner or later. In fact, many mums believe that a good pre-school helped prepare their children to handle the separation anxiety better especially as compared to the drop-off processes of through schools where a parent does not go beyond the gate. A through school may not be as flexible with you dawdling around until your child is comfortable.

The admission process in itself can be stressful and if you'd like to do it once and for all, then this might be right for you. The Bollywood movie Hindi Medium has a hilarious yet somewhat true-life take on how stressed some parents can get.

Enrolling your child directly into pre-nursery in the through school will sail him/her through smoothly to other classes. Not to forget, this also helps a parent skip paying the admission fees twice, now that is an amount many parents would like to save.

A well thought decision based on your own child is what you need to give priority to. A pre-school closer to home might work better for a child, while another child the same age may be elated with the bus ride to a main school at a distance.

The decision should be based on the child and where he/she will thrive. For parents who do decide to wait for the big school till KG or Class I, there are umpteen good schools beyond the hype that have seats available and may be great options for your child.

(The writer is Founder, SchoolWiser)