A woman ahead of her time

A woman ahead of her time 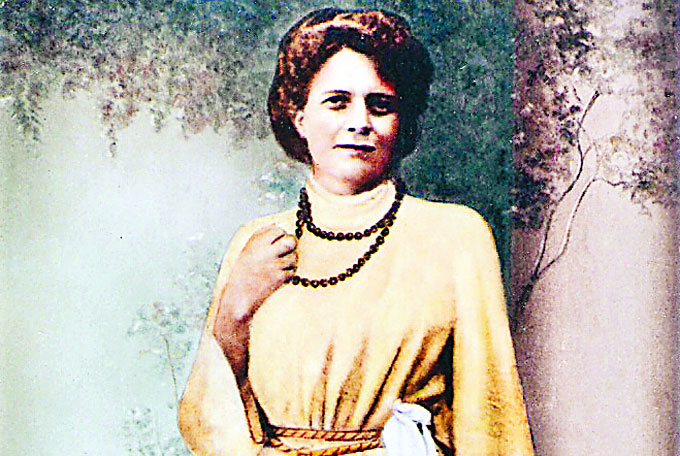 Sister Nivedita’s approach to nation-building was to awaken a nationalistic consciousness in all areas of national life — education, literature, science, history, art and folk culture

The whole history of the world shows that the Indian intellect is second to none. This must be proved by the performance of a task beyond the power of others, the seizing of the first place in the intellectual advance of the world. Is there any inherent weakness that would make it impossible for us to do thisIJ Are the countrymen of Bhaskaracharya and Shankaracharya inferior to the countrymen of Newton and DarwinIJ We trust not. It is for us, by the power of our thought, to break down the iron walls of opposition that confront us, and to seize and enjoy the intellectual sovereignty of the world.” —Sister Nivedita in Karma Yogin.

The life and work of Sister Nivedita show us that tradition and modernity can be blended together for the development of the country. In the 150th year of her birth, her thoughts are as relevant as during her lifetime. Her life is an example of the respect for women and culture in Hindu civilizational thought. For all those who criticize Hindu Dharma for being disrespectful to women, Nivedita proves them wrong and sets up an alternative way of looking at India. She revived traditional art, supported Indian scientists, redefined literacy for women and advocated for an Indian way of development.

Margaret Elizabeth Noble became Sister Nivedita when Vivekananda initiated her into the vow of Brahmacharya on March 25, 1898. She became the first Western woman to be received into an Indian monastic order, in a sense breaking even 21st century taboos in the 19th century. Brought up by an Irish freedom fighter and inclined to spiritual pursuits even in school, she had already delved deep into the teachings of the East and the West by the time she finished her early education. Nivedita wrote in 1904 to a friend about her decision to follow Swami Vivekananada a result of her meeting him in England in November 1895:

“Suppose he had not come to london that time! life would have been like a headless dream; for I always knew that I was waiting for something. I always said that a call would come. And it did. But if I had known more of life, I doubt whether, when the time came, I should certainly have recognised it.”

Women and Education: In Ireland, she had worked as a teacher and then established her own school where she followed her unique methods of teaching; this background played a significant role in her being chosen for the role of educating Indian women. Vivekananda believed education was the panacea for all evils plaguing Indian society, especially in terms of the treatment of women. Following his lead, Sister Nivedita eschewed the standard approach of imparting a purely European ‘civilising’ education and strived to take key, humanistic elements of a Western education and sought their synthesis with Indian culture traditions. She declared that “first and foremost, we must root them in their own past” and then impart to Indian women the three characteristics of a modern mind, ‘scientific standards geographical conception and historical possessions.’ Reaffirming her belief in the Hindu Goddess as a symbol of Shakti, Nivedita opened her first school in Kolkata on the day of Kali Puja (November 13, 1898).

In addition to classroom learning, an industrial department in the school was initiated in 1903 wherein handicrafts like embroidery, tailoring, and toy-making were taught. Today, this department is affiliated to the Government-run Directorate of Cottage and Small-Scale Industries. Sister Nivedita redefined literacy for women whenever she lectured and held high the banner of Indian ideals of womanhood. In her speech at Madras, she asserted:

“When we come to the charge that Indian women are ignorant, we meet with a far deeper fallacy. They are ignorant in the modern form, that is to say, few can write, and not very many can read. Are they then illiterateIJ If so, the Mahabharata and Ramayana and the Purana stories every mother and every grandmother tell children are not literature. But European novels and the Strand Magazine by the same token are. Can anyone accept this paradoxIJ To those who know Indian life, it is easy to see that an Indian woman who has the education of an Indian home -- the dignity, the gentleness, the cleanliness, the thrift, the religious training, the culture of mind and heart which that home-life entails --though she cannot sign her name, may be infinitely better educated in every true sense, and in a literary sense also, than her glib critic.”

National Movement: Nivedita’s conception of nationalism was to awaken a nationalistic consciousness in all the areas of national life — education, literature, science, history, arts and folk culture. The worship of Goddess Kali and traditional family practices became the focal point of her own interpretation of “Muscular Hinduism”. A metaphor for death overcoming life in spiritual terms, Kali was seen as freeing her worshippers from fear and thus empowering them, and Nivedita associated this empowerment with the burgeoning Indian nationalist movement. She spread the national consciousness by writing in Indian newspapers and periodicals of the time and also wrote several books, the most remarkable of which are: Kali the Mother, Cradle Tales of Hinduism, The Master As I Saw Him. The best of Nivedita’s books on Indian national life was The Web of Indian life. Through this book Nivedita gave a befitting reply to vile representations of Indian culture and civilization by Western scholars of the time. Considering herself a Manaskanya or spiritual daughter of Swami Vivekananda, she often called Vivekananda “The King”. Her book ‘The Master As I Saw Him’ records some of her experiences as his disciple.

Science and Art: The dominant narrative at the time characterised the Indian tradition as inferior and Nivedita worked hard for the revival of Indian arts and science to build a counter-narrative. It is somewhat ironic that it took an Irish woman wearing European attire to teach us to flower according to our innate nature. When Indian scientist Jagadish Chandra Bose created a sensation in the world by his original research but had to work in extremely difficult conditions in a subjugated India, Sister Nivedita, realising Bose’s worth, exerted her influence to secure him assistance from the Government. Nivedita propagated his work through newspapers and periodicals. As Bose’s research entailed substantial expenses, she helped him financially too. She also she made a unique contribution in developing an art movement on national lines. This movement, that grew with Havell and Abanindranath and culminated in Nandalal Bose, owes much to Nivedita. She always inspired and guided talented students of the Calcutta School of Art to rediscover the forgotten tracks of ancient Indian art. In the same way, she greatly encouraged eminent personalities like Romesh Chandra Dutt and Jadunath Sarkar in writing history from a nationalist, Indian perspective.

Sister Nivedita passed away on October 13, 1911 but she remains one of the most influential female figures of Modern India. Her book Kali, The Mother so impacted and influenced AbanindranathTagore that his depiction of Bharat Mata is thought to have been inspired by reading it. Several schools and colleges have been named after her and in 1968, the Indian Government issued a postal stamp in her memory. The Nivedita bridge near Dakhineswar, Kolkata, is named in her honor. In a short life of 44 years and through her endeavors she personified the goal of Swami Vivekananda — “Be and Make”.

Nivedita used to say that her task was nation building. For her, progressing and conserving were not at odds. She could take India on the path of development while preserving its traditional beauty. Her love for the country is reflected in her epitaph: “Here reposes Sister Nivedita who gave her all to India.”

We must not fail her.

(The writer is Associate Director at Vision India Foundation)