Investing in honeybees for a sweet revolution

Investing in honeybees for a sweet revolution 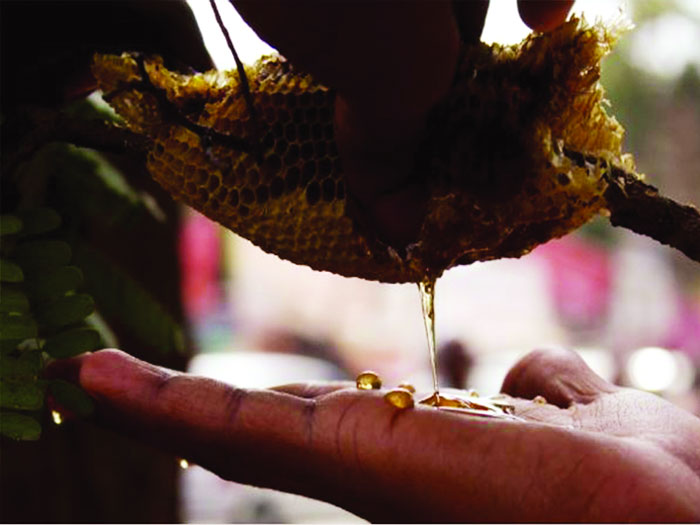 India is fortunate to have four species of honeybees. By adopting a strategy to increase the number of honeybee colonies, it can become a major producer and exporter of honey and beeswax

Always on the lookout for innovative ideas to change the face of the nation, Prime Minister Narendra Modi recently said that along with shwet kranti (white revolution) there is also a need to launch ‘sweet’ kranti (sweet revolution). The Prime Minister’s vision is to make India a world leader in the production of honey and beeswax and to convince the farmers to increase crop production through cross pollination.

Flowering plants first appeared on the earth about five to eight crore years ago. Honeybees are presumed to have simultaneously evolved from their wasp-like ancestors. This is so because both, flowering plants and honeybees, are interdependent. Honeybee uses the nectar and pollen collected from flowering plants as food and also transfer pollen, the male sperm of the flowers, from one flower to the female part of another flower of the same species. This brings fertilisation in flowers. Cross pollination results into the formation of large quantity of quality seeds/fruits.

Honeybees and environment: In forests, trees, shrubs, herbs, climbers, weeds etc provide food to honeybees for a major part of the year. The forests also provide shelter to honeybees, who reciprocate by offering pollination service, assuring seed formation, and maintaining genetic diversity in plants. Therefore, honeybees are an integral part of the forests and their ecology.

Honeybees and agriculture: Honeybees are of great importance to the farmers for pollination and increasing crop yields. Agricultural scientists in the US have estimated that the value of the increased crop yields, due to bee pollination, is 15 to 20 times more than the value of honey and wax the bees produce.

The ongoing central projects for increasing crop yields have not been very effective. Vegetable yields per acres are declining; output increase is linked to area expansion. During 2016-17, India imported edible oil equal to 70 per cent of the home production. Majority of oil producing crops depend on insects’ pollination. A large number of plants are fruitful only when pollen from the flowers from one plant is transferred to the flowers of another plant of the same species to ensure fertilisation. Under present day conditions, honeybees are by far the most efficient, reliable and leading agent in pollen distribution, most commonly known as pollination.

According to a report by the Food and Agriculture Organisation of the United Nations, honeybees play a role in nearly 74 per cent of the world’s edible oil production. The value of the increased crop production, due to insect pollinators, is worth $203 billion. In the US, farmers and orchardists pay $100 to $150 per bee colony per month to the beekeepers for bee pollination service. In California, almond orchardists pay about $15 crore to beekeepers for bee-pollination service rendered during two months of flowering season. In India, crop yields per hectare of all crops are just 40-50 per cent of the world productivity per acre. Honeybee pollination can play a major role in bridging the gap.

Conservation of honeybee colonies: Over 70 per cent of the several hundred major cultivated crops of the world are dependent on insects for pollination. Physical and chemical changes in the environment have accelerated a crisis of decline in richness of the species of honeybees and other pollinators. Environmentalists and scientists have been warning that excessive use of insecticides, pollution, resulting into depletion of population of insect pollinators is threatening to reduce our total supply of food by one-third. As a result, 50 per cent of the population of the developing countries can suffer from malnutrition. As honeybees are the most efficient, leading and reliable pollinators to boost up crop productivity, agriculture must be integrated with forestry.

World and Asian scenario: About five crore honeybee colonies, mostly European honeybees, are maintained all over the world. They produce nearly 10 lakh million tonnes of honey and one lakh million tonnes of beeswax. Fifteen countries in the world account for 90 per cent of the world’s honey production. China leads with one crore bee colonies, producing about 1.6lakh millions tonnes of honey, and 12,800 million tonnes of beeswax. Beijing is the biggest exporter of honey, beeswax and other honeybee products. America has 50 lakh bee colonies and Russia has 50 lakh. Canada, latin America, European countries, Australia, New Zealand are other important countries, each maintaining five to 10 lakh bee colonies. Israel, a small arid country with geographic area equal to one or two districts of India, and with an average rainfall of only seven to eight inches, maintains 84,000 honeybee colonies that produces nearly 30 lakh kilogram of honey. Israel also uses these colonies for planned pollination of crops, making it 97 per cent self-reliant in crop production.

While the number of bee colonies in the developed countries is decreasing due to insecticides and general pollution, China has increased the bee colony number from 60 lakh to one crore during the past five decades. India has about 10 lakh  indigenous bee colonies and two lakh imported European bee colonies. India is fortunate to have four species of honeybees and is endowed with different types of forests and variety of agricultural and horticultural crops. By adopting a strategy to increase the number of honeybee colonies, India can also become a major producer and exporter of honey and beeswax.

Considering the area under forests and crops are useful to honeybees, the National Commission on Agriculture has estimated the potential of India at five crore honeybee colonies. Scientists at the Indian Council of Agricultural Research have estimated that the country requires minimum 70 lakh honeybee colonies to pollinate 12 important crops that depend on insects, like honeybees for pollination. As against this minimum need, only 10 to 12 lakh bee colonies are available at present.

Beekeeping industry has quadruple benefits viz, i) producing lakhs of kgs of honey and beeswax from the nectar of flowers which otherwise dries up and goes waste ii) providing employment to forest population, marginal farmers and landless labourers iii) providing employment to rural educated youths in collection, processing and marketing bee-products and finally the most important iv) increasing productivity of various crops through bee-pollination.

Keeping in mind the importance of honeybees, the Khadi and Village Industries Commission (KVIC) launched the ‘Honey Mission’ under which it distributed one lakh bee-boxes with bee colonies across the country to the farmers and prospective beekeepers.

To celebrate the World Honey Bee Day on August 19, the KVIC also set up an

apiary of 200 bee-boxes at the Rashtrapati Bhavan. This will not only produce high quality honey and beeswax but it will show that large Government properties, with lots of flora and fauna, can be utilised for such novel purpose.

(The writer is Chairman, Khadi and Village Industries Commission)