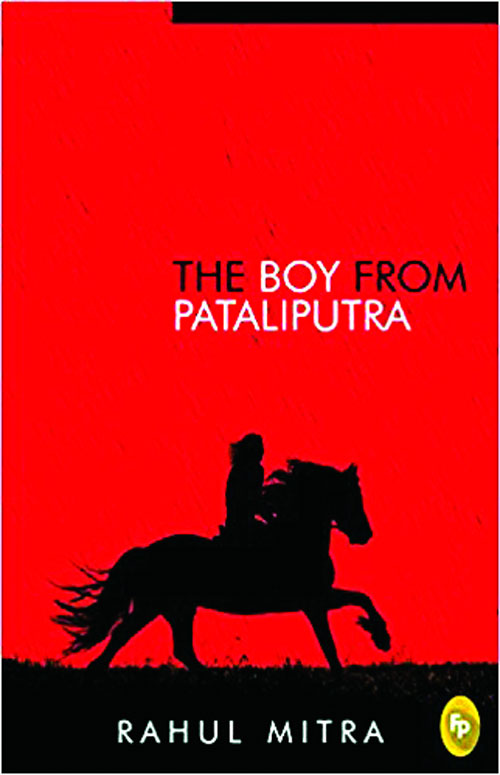 The Boy from Pataliputra

Rahul Mitra through his book tells us the story of an ignorant boy who, due to unforeseen circumstances, turns into a man with a steely determination and only one life goal — to avenge his brother’s murder, writes  AVANTIKA BOSE

Whenever I pick up a non-fiction book, I want to get lost in it. Dealing with harsh realities of life, we all need an escape and for me that comes in the form of a non-fiction paperback. After hearing a lot about the book The Boy from Pataliputra by Rahul Mitra, I couldn’t stop myself from reading it and that was an excellent decision.

The book is about the journey of a boy named Aditya, from Pataliputra to Takshashila and how he grew as a person due to the new experiences and affiliations that he comes across. A boy who is considered to be a ‘good for nothing’ not only travels far far away from his hometown, the only place that he has ever known, but also makes a good living there, earns a name for himself, rises in his career, makes friends who become family and is a hard worker.

Goodreads describes the author as, “Currently living in Mumbai, Rahul Mitra is an author masquerading as an IT professional. When not toiling away at his writing, Rahul likes to visit his office to take print-outs, socialise and drink endless cups of coffee.” The book’s website mentions, “Passionately interested in all things Indian, Rahul is vociferous in his opinions about India, its people and its culture.”

The author takes us back in time to the fourth century BC. Characters in this book are exceptionally well painted with realism and emotions to make the readers look straight into the minds of those characters.

The book starts with the viewpoint of Ajeet who is Aditya’s older brother and takes care of the carefree young boy. Ajeet is a down to earth, follows all the rules to a T, hardworking kind of person and Aditya is the exact opposite.

Due to a twist in events Ajeet is executed and Aditya is left alone in this world to fend for himself. Ajeet’s best friend sends Aditya to Takshashila to save him from the same fate as that of his brother. The story after Ajeet’s death is told through the eyes of Aditya, who’s the protagonist of this novel. The journey from Pataliputra to Takshashila is what turns Aditya from a boy into a man with steely determination and only one life goal ie to avenge the murder of his brother.

Takshashila opens up a new world of learning and opportunities for Aditya. Where on one hand he’s getting the pieces of his life back together, on the other hand, Alexander is planning a strategic attack on the Indian subcontinent. This attack changes the life of Aditya, his friends, the people of Takshashila and its surrounding areas in a way they had never expected.

As the invader advances relentlessly and wins bloody battles in quick succession, as local rulers fall over each other to shake hands with the enemy, and as the students of Takshashila University break into an open revolt, one young man is faced with a terrifying choice, a choice that threatens to tear his carefully constructed world apart. For Aditya is the boy from Pataliputra, the boy who was once a reckless and carefree aristocrat, but who has now become a man with a purpose — to fight for honour and love. So will Aditya make the right choiceIJ Will he stand on the sidelines while his friends and thousands others are murdered or will he support them and throw away everything that he has worked forIJ These are just few of the questions out of many that will run through mind while reading this gripping novel.

I will not go into anymore details of the book as I wish to avoid spoilers, asking you to take your time and read this book. The whole tale makes your heartbeat go fast and then slow, makes one happy and sad at the same time. It is for sure a page turner novel.

Overall, I would say it is a good read. The story has within it funny, scary, violent, romantic, thought provoking, imparting knowledge, filled with anticipation and mystery moments; which in fact is the whole package. What more can you ask for!

The book ends with the line “a feeling of intense energy came over him. The fight for India was not over, and neither was his fight for revenge. He was alive, he was strong and his brothers were at his side. The fight would continue”. The note on which it ends leaves the readers wanting for more. This also is a subtle hint to the readers that the story of Aditya isn’t over yet. I definitely feel there’s a sequel to this book and I can’t wait for it to come out.