All set for Telangana poll

All set for Telangana poll 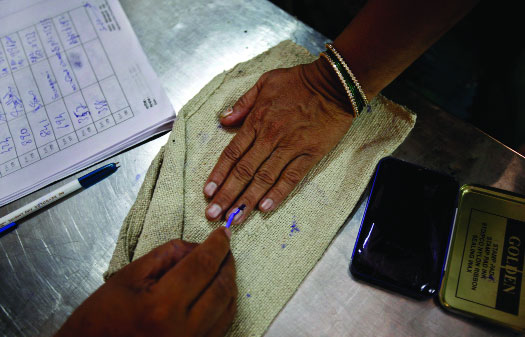 Chandrashekar Rao has played his cards well. The popular perception is that his party, the TRS, will win the Assembly poll. A united Opposition, however, can dent its votes

Telangana, the country’s youngest State, will face elections on December 7 for the second time since its birth in 2014. Chief Minister Chandrashekar Rao took a big risk by advancing the Telangana Assembly polls by eight months. It was also his bravado to announce the list of 105 candidates on the same day even before the Election Commission of India announced the polling dates. But the question is: Will he succeed in his gamble?

Though it was the Congress Government at the Centre then that agreed for a bifurcation of the State in 2014, the Telangana Rashtra Samithi (TRS) came to power, riding on the Telangana wave.  Contrary to its expectations, the Congress was wiped off from both Telangana and Andhra Pradesh.

As there is no wave this time, the polls are a fight for survival for the Opposition, including the Congress.  The Telugu Desam Party (TDP), the Congress, Communist Party of India and the Telangana Jana Samithi have formed a Maha Kutami (grand alliance) against the TRS. M Kodandaram of the Telangana Joint Action Committee, who has fallen out with KCR, heads the Telangana Jana Samiti (TJS). Interestingly, the Congress and the TDP, one-time arch-rivals, have come together gasping for political survival. It is not clear how their chemistry will work.  The TRS did not expect this development but is taking the alliance seriously.

Rao is now facing new challenges. He has built a personality cult around himself. He has made his son KT Rama Rao as his number two in his Cabinet, his nephew Harish Rao as a Minister and daughter Kavitha as an MP. The Opposition is trying to make his style of authoritarian functioning, dynastic rule and his secret understanding with the BJP as election issues besides jobs and non-deliverance of promises. The TRS is now ready to bail out the BJP in case it misses the 272-mark in the next Lok Sabha polls. KCR is also hobnobbing with leaders like West Bengal Chief Minister Mamata Banerjee, attempting to form a federal front.

Why did Rao go for this gamble?  Astrologers rule KCR on practically everything. Before taking the decision, KCR got at least 10 surveys done and is confident that his party would get at least 100 seats while realists put it at 70 or 80 seats. He believes that the surprise element will go in his favour.

Rao wants the polls to be a KCR versus the rest and not a Modi versus KCR.  He is confident of winning as neither the Congress nor the BJP or the TDP has local leaders of his stature. If he wins, he proposes to install his son Rama Rao in the Chief Minister’s post and move to national politics. KCR has big dreams of becoming the next Prime Minister.

On the plus side, the KCR Government has already announced many welfare schemes, including Rythu Bheema and Rythu Bandhu schemes for the farmers. He has also taken up various projects such as Kaleshwaram project, Mission Kakatiya, Haritha Haram and Mission Bhagiratha. The manifesto will come up with more poll promises. Besides, Telangana is also one of the top rankers in the ease of doing business rankings. It registered an increase in gross domestic product growth and industrial development. It is way ahead of other States in the per person consumption of power, progress in the service sector and IT exports.

However, it is not all hunky dory for KCR as he has not delivered on the two-bedroom house scheme, transformed the State into Golden Telangana, filled up 1.50 lakh vacancies or provides jobs to those killed in the Telangana agitation.  From a surplus State, it has now become a revenue deficit State.

Traditionally, the Congress had the backing of dominant Reddys and Scheduled Castes while the TDP had a substantial number of its core OBC votes.  The Congress is seen as a Reddy party while the TRS a Velama party. Muslims and Dalit voters are key to the polls. The State, a part of the erstwhile Nizam territory, has around 12 per cent Muslim population. The AIMIM, a one-time ally of the Congress, has moved closer to the TRS and both have decided to go for friendly contests where they have no conflict of interest.

Most surveys predict a clear win for the TRS. As of now, the prediction is that it is advantage TRS, although fight by a united Opposition can dent its votes. But the lack of a Telangana wave is a big minus.  A win or lose ultimately depends upon Opposition unity, youth support, anti-incumbency and communicative skills of the players.