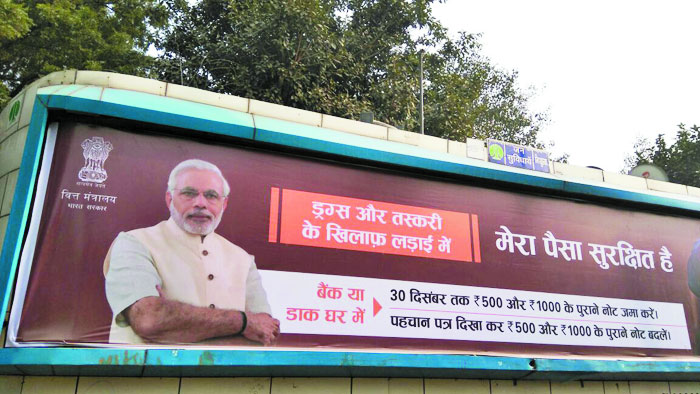 In April of 2019, the European Union (EU) proposes to bring into force a regulation that requires companies operating in the EU to adopt slogans that are accurate, failing which, such companies will face fines up to two per cent of their global revenue. The BJP must be counting its lucky stars then because this past week, it was reported by the Broadcast Audience Research Council that the party was the most advertised brand on television in the run-up to the Assembly elections, beating many corporate heavyweights in the advertising space, such as Netflix.

Funnily, in late August this year, we also saw the BJP to be the only party at the all-party meet organised by the Election Commission to reject the idea of a cap on election-related expenses by political parties. This article will examine how these statistics only show that this is a smoke and mirrors a Government that spends more time in ensuring that its marketing campaign stays on point; rather than delving into complicated questions concerning the country.

Ever since the BJP won the 2014 election, its go-to strategy has been to use marketing and advertising to paper over the cracks that have emerged during its governance. With the state of the economy, the state of jobs and the fact that India’s premier security agency is currently engulfed in a full-blown crisis that is unfolding each day in the Supreme Court, the BJP has its hands full. So one can’t blame them for trying — it is harder to keep everyone’s attention away from the facts on the ground and use its money power to do so.

On the influence of money in an election, ever since it came to power, the BJP has displayed a singular focus not on limiting the influence of money in elections but letting it run amok. It has set the example itself by not only beating huge corporates in branding but also by failing to change the system in place or to check such influence. Take, for example, the introduction of electoral bonds. As I have examined previously in these columns in The Pioneer, the electoral bonds scheme recently introduced by this Government permits any person who is a citizen of India or is an entity incorporated/established in India to purchase an electoral bond in favour of certain political party. Compared to other forms of funding, disclosure requirements for these bonds were made minimal by this Government.

For example, under the Representation of the People Act, 1951, (RP Act) political parties are required to prepare a report of all contributions received in excess of Rs 20,000 from a person or a company in a financial year. They are required to submit this report to the Election Commission. After the introduction of the electoral bonds scheme as also, amendments introduced under the Finance Act, 2017, the RP Act now creates an exemption to this reporting requirement for contributions made in the form of electoral bonds to political parties. These amendments follow the same ethos as the BJP’s political strategy in dealing with specific criticisms that are thrown at it, ie obfuscation over transparency.

Another change that was introduced by the BJP was a cap on spending for companies under the Companies Act, 2013. Prior to this, Indian companies were restricted from spending more than 7.5 per cent of their average profits towards funding political parties. Now such a cap has been done away with. These changes inarguably allow for greater influence by corporates in our political discourse. During its tenure, the BJP has had to also defend itself against a number of allegations of promoting crony capitalism. Whether it’s the ‘Rafale’ controversy or the BJP’s ineptness in failing to check economic offenders like Vijay Mallya, Nirav Modi and Mehul Choksi from fleeing the country with public money etc, the BJP can’t seem to shake this image.

The major problem I foresee with this unabated rise of corporate influence on the political process is that there is no such thing as free lunch and the influence of such funding, whether through electoral bonds or otherwise, is inevitably at the cost of other stakeholders, whether it is an NGO advocating for environmentally friendly policies or tribals fighting for their land. We must be wary and guard against such fate.

Another reason why genuineness and transparency in our political discourse have taken a back-seat is the problem of ‘fake news’. The buck here, too, must stop with Prime Minister Modi. ‘Fake news’ has skewed our political discourse by making it almost impossible to determine what the true picture is. While a responsible Government should take steps to check the influence of fake news, this Government has singularly failed to tackle an issue that has risen unabatedly since 2014.

Last year, for example, at least 30 Indians lost their lives due to rumours that were circulated on WhatsApp. However, rather than taking ownership of the matter, the Government entrusted the responsibility of tackling this problem to the intermediary.

The problem has been exacerbated by the Government not only because of its lack of seriousness in approaching the matter but also because of the signalling that the Prime Minister and the BJP engage in. A recent BBC study bolstered the stand of the Opposition and victims of vicious trolls, that there is a systematic effort in subverting democracy that is in operation by trolls online who spread fake news and aim to discredit actual facts. The BJP, however, has turned a blind eye to it.

As per the report, “Many more of the Twitter handles that have published fake news sit in the pro-BJP cluster than in the anti-BJP cluster”. This is not news to me. Within minutes of a post on Twitter criticising the Government, Prime Minister Modi or the BJP, there is almost an immediate outflow of abuse and vitriol that one is subjected to. Such systematic targeting suggests that there is a committed mass that has been hired to do just this.

The fact that the Government has taken no action against this form of online attack is at the very least shameful but borders on complicity. It is especially disheartening that a number of these trolls and vitriol-spewing people are followed by the Prime Minister wear this as a badge of honour. The Prime Minister would do well to disassociate from such entities and their hateful abuses. Perhaps, though, this may be too much to expect from a politician who has himself rarely shown restraint and insulted family members of Opposition leaders and then turned around and played victim when he is criticised for doing so.

To end this piece, one might ask what the Government must do to answer these uncomfortable questions on limiting the influence of money and fake news. The answer is not complicated. For one, the Government and especially the Prime Minister should come out specifically against hate and abuse that trolls spread and clamp down on any such action within its camps. For another, it can just agree on a cap to election spending. I wouldn’t hold my breath on either though.

Lucky for the BJP then, who competes with big corporate entities on advertising but is outside the ambit of the laws of the EU, that I mentioned at the beginning of this piece. If the BJP did have to similarly comply to such regulations, a change in branding would be deemed necessary: “Suit-Boot Ki Sarkaar”, for example, has a nice ring to it and may be more authentic than “Na khaaonga, Na khaane doonga”.