Behind the big cat deaths

Behind the big cat deaths 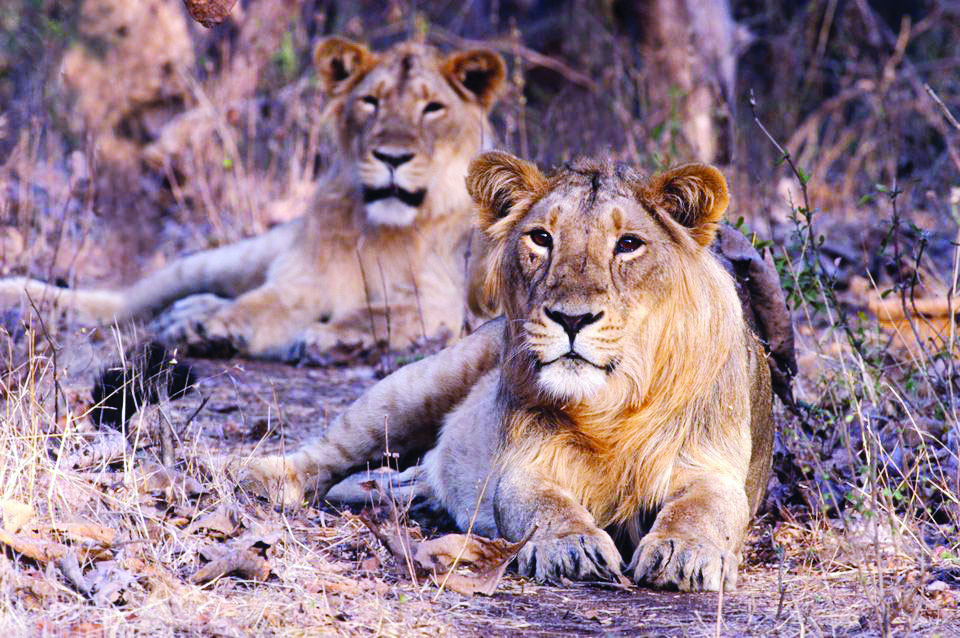 The death of 23 Asiatic lions in Gir is a reminder that the big cat’s management is a gigantic  challenge. However, the State’s forest department must be complimented for quick action

The death of 23 Asiatic lions (three lions, 11 lionesses and nine cubs above six months) in just two weeks, starting end of September and beginning of October, set alarm bells ringing for the Gujarat Forest Department. Initially, confusion prevailed but progressive deaths compelled the authorities to go for a prompt scientific investigation. Samples of the dead lions were sent to the National Institute of Virology, Pune, College of Veterinary Science and Animal Husbandry, Junagadh, and FSL Junagadh to find out the possible reason that killed the lions. Samples of five lions confirmed the attack of a virus — Canine Distemper Virus (CDV). The Veterinary College, Junagadh, confirmed the presence of Babesia protozoa in about a dozen samples. Suspecting an attack of the CDV, all surviving lions from the Sarasiya Round in Dalkhaniya Range were captured and kept in isolation at the Jasadhar lion care centre to avoid any contact with other lions.

Another 33 lions from the adjoining area of Dalkhaniya Range were also captured and sent to Jamwala lion care centre. Of the infected lions kept in Jasadhar, all died but three survived as their immune system was better equipped to tackle the disease. Additionally, deaths of a few lions in August this year in the same region due to a similar disease cannot be ruled out.

The Gir protected area (1,452 sq km) and its surrounding forests cover an expanse of 1,882 sq km, which is distributed in 15 ranges, 60 forest rounds and 152 forest beats. The spread of the CDV disease was confined to 26 lions in Sarasia Round in Dalkhania Range. Other 33 lions in the adjoining Dalkhania range were suspected of such an attack, but a laboratory test proved that they were free from the fatal disease. Statistics reveal that only about two per cent of the Gir protected area and about four per cent of the Gir lions were infected by the fatal CDV and Babesia protozoa, although the presence of the virus in other lions having immunity against the virus is not being ruled out.

When the fatal infection by CDV and Babesia protozoa attacked the African lion in Serengeti-Masai Mara landscape, it killed about 1,000 lions, almost 40 per cent of the total population of the Serengetti National Park in Tanzania in 1994. The first distressed African lion affected by the disease was detected in the first week of February in 1994. Before authorities could understand the problems, almost one year after the detection of the first case, about 1,000 lions died by the end of 1994.

Subsequently, after seven years, in the much smaller nearby Ngorongoro Crater population, around 100 lions suffered a similar higher percentage of losses in 2001. Unlike the two cases in the known history of the African lions, the administration of the Gujarat Government was fast to act against the problems. The wildlife wing of the Gujarat Forest Department promptly removed the entire population of one or two pride from the Sarasia Round.

Not only the Sarasia lions but also 33 lions from the adjoining Dalkhania round were captured and removed from the wild. Prompt action avoided the spread of the disease to other areas. Blood samples and saliva of the infected and also the non-infected lions kept in isolation at Jamwala were examined to investigate the presence of the disease. After scientific inputs from national and international experts, 300 vaccinations were procured from the US to meet the emergency situation. All lions in the enclosure were vaccinated. Subsequently, they were sent to semi-captivity in Devalia Gir Interpretation Centre, a large safari park which covers an area of about 412 ha.

Like several unprecedented measures in 2007, after eight lions were poached by a gang of raiders from Katani, Madhya Pradesh, the Gujarat Government was prompt to initiate several actions to avoid such a threat to the Gir lion. In collaboration with the Animal Husbandry Department, the vaccination drive was launched in both divisions of the Gir forests.

The problem of the big cat’s management is gigantic in the Gir lion conservation landscape. About half of the lions, 300 individuals, roam around in an area of about 12,500 sq km in 1,400 villages in the four districts. The big cat population in this landscape is over 1,200 creatures (over 600 lions and over 625 leopards), which is more than three times the combined population of tiger and leopard in the best tiger landscape in any part of the country.

The electronic as well as the print media have been covering stories on the Gir lions since the last one month. Many stories were far from the truth and were mixed with politics. Many doubted the intention and efficiency of the administration. Remember, nothing is perfect and absolute. How can an administration be perfect? More action is expected to ensure the safety of the lion.

During the last five decades, the lion population in India has increased three-fold, from 180 in the early 1970s to over 600 in 2018. Their wild prey population too went up from about 6,400 to 83,000 during the same period. The conservation story of the Asiatic lion in the Gir forests is one of the best wildlife conservation stories in the world and it will continue to be so in the future. But increasing lion and leopard population in the human-dominated landscape is expected to throw a bigger challenge in the future, despite good wildlife management practices.

(This is the first article in a two-part series on Asiatic Lions. The second part will appear in these columns on Tuesday, October 30. The writer is Member, National Board for Wildlife)