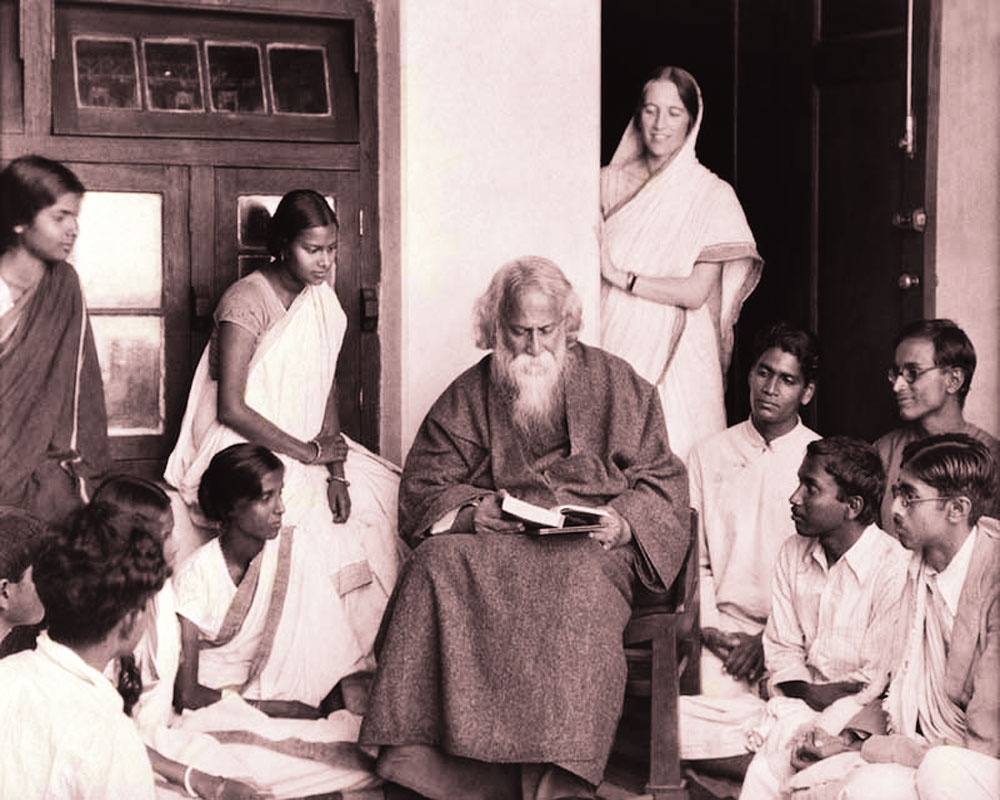 Rabindranath Tagore’s vision of education was one that is universally acceptable. It's time India reconsiders the basics of its education policy and systemic structures

On December 22, 1901, history was created in Indian education when Rabindranath Tagore inaugurated his school in Shantiniketan. Various aspects of education and learning were churning his mind all along ever since he, as a child, experienced what went on in the schools. Gradually, he evolved his own perception of the process of acquisition of knowledge and started planning to give it a practical shape. He started by teaching his own children but realised that sporadic initiatives would not work. As Tagore’s biographer, Krishna Kripalani, put  it: “Having suffered from bad teaching in his childhood, Tagore had thought much, and written, too, on the fundamentals of teaching, and now, he gained a new insight by putting his principles into practice. But teaching one’s children haphazardly is not enough. He needed a wider field for systematic experimentation. He thought, why not shift to Shantiniketan and start a small experimental school there?” His thought process was already influenced by the ancient gurukula system and the way knowledge was dispensed and acquired there, naturally.

Sages and saints lived with their pupils, presented the ideals of simple living and universal thinking. Tagore was convinced that the best teacher was nature. He wanted to recreate the joyful, soulful and inspiring environment of Tapovan that could add grace and beauty to the entire process of learning, internalising knowledge and acquiring skills to utilise it for the welfare of the people. Revival and inclusion of the basics of ancient Indian system were the only way out of the soulless and mechanical system that had replaced it.

Tagore summarised the essence of his educational ideas when he declared that the great use of education was “to know man and to make oneself known to man.” And towards this, everyone must get a chance to learn the language of intellect and also the ‘language of art’ that is essential for overall personality development. His own experiences of schooling were indeed highly uninspiring. Hard benches, dull prison-like walls and the ‘master’ who ‘looked like a cane incarnate.’

Tagore once said, “As soon as I entered the class-room, the benches and tables forced themselves rudely on my attention, elbowing and jostling their way into my mind. They were always the same — stiff, cramping and dead.”  Things, it is officially claimed at this juncture, have changed — at least in principle — but the overall environment in most of the schools remains more or less unattractive and uninviting as in the times of Tagore’s childhood. It is still the same painful, overstressing and creativity-killing environment that maintains the regime of “cram and exam.”

Even at home, learning has become a ‘task’ that must be performed mechanically. “As I read, I nod, then jerk myself again with a start but miss far more than I read. When finally I tumble into the bed, I have at least a little time to call my own.” His unpleasant experiences, both in school and during private tuition at home, convinced him that it was not the system that encouraged flowering of human talent and personality. Whatever time he spent in schooling and his initial earning gave him the knowledge of the wrongs suffered by children. The so-called discipline in schools practically debarred students from participating in activities that naturally attracted them  — they felt fettered and imprisoned. Tagore could never reconcile to the idea of children being made to sit like “specimen of some museum in classrooms, while lessons are being pelted at them from high-like hailstorm on flowers.”

All that he experienced and disliked, fired the imagination of young Tagore to visualise better ways to educate. And this thought process that began rather early and resulted in the creation of the persona of the gurudev. His search for a universal humane approach to the existing system of imparting and receiving education, knowledge and wisdom was a lifelong process.

As the scion of a zamindar family, with a very sensitive and compassionate mind, his life-long passion was not only education, culture and art, but also the economic rehabilitation of the Indian village. His consistent and lifelong interest was the welfare of Indian peasants. Simultaneously, the sensitive poet was keenly observing the people of India, their miseries, strengths, selfishness, readiness to sacrifice, patience, heroism and sense of resignation to fate and in the process accepting injustice without manly retaliation.

Tagore understood India — its people and its tradition of knowledge quest — its contemporary relevance and deficiencies that grew due to the lack of dynamisms and reluctance to move with current times. While his outstanding contributions in the intellectual arena are recognised and revered throughout India and abroad, his singular and sensitivity-filled initiatives for the masses are often overshadowed. Not many know that he had, along with Shantiniketan, also founded a parallel institution — Sriniketan — for the welfare of the peasants.

These farm labourers needed support, including inputs of new ideas, skills and outputs of new experiments and innovations that were feasible because of developments in science and technology. He donated a part of the Nobel Prize amount to his school in Shantiniketan and invested a substantial portion in a cooperative bank that was created by him to help needy peasants on his family estate. He realised that people needed to be inspired about their inner potential and ways to manifest it, moving out of the shackles of despondency and rejuvenate their lives through regeneration of self-assurance and acquisition of requisite levels of knowledge and skills.

It was the sensitivity to the lives of the  common man around which a considerable number of his stories were woven; mostly his narratives revolved around their lives, times and travails. Tagore was convinced that the objective of education must be constructed around bringing about excellence in human lives by education that would dispel the darkness of ignorance. His idea of education did not mean a pedantic acquisition of knowledge but true wisdom: “We have to keep in mind the fact that love and action are the only media through which perfect knowledge can be obtained, for the object of knowledge is not pedantry but wisdom.” Once an individual expands his /her canvas of outlook and awareness through education, s/he can express himself/herself with self-assurance, and that would give him/her the sense of complete freedom that everyone wishes to achieve. “Apathy and ignorance are the worst forms of bondage for man; they are the invisible walls of confinement that we carry around us when we are in their grip.”

Once the cloud of darkness is dispersed through the light of the right kind of education, given and received in a congenial and sensitive environment, it would be easy to comprehend the ‘unity of truth.’ This is one aspect that has been creating so much turmoil in human existence at this stage. It manifests in the shape of war, violence, distrust, fundamentalism, insecurity, misery, hunger and poverty.

To move ahead to ameliorate inhuman trends and tendencies, education systems should focus not only on the intellectual aspect, but equally on physical, intellectual and emotional characteristics.  The need for this is in some way being acknowledged and accepted in terms of ‘spiritual quotient.’ It requires serious consideration by policy-makers of current times: “The young mind should be saturated with the idea that it has been born in the human world which is in harmony with the world around it. And this is what your regular type of school ignores with an air of superior wisdom, severe and disdainful. It forcibly snatches children away from a world full of mystery of God’s own handiwork full of the suggestiveness of personality.”

It is evident that Tagore liked every learner to be well aware of his/her responsibility to strengthen the sensitive bond between man and nature. And that would be possible and practical only when human beings learn to respect each other, realise the unity in diversity, appreciate the beauty of multiplicity of every conceivable variety, including the religious plurarism.

Familiarity with the basics of Tagore’s philosophy of education can go a long way in re-orienting the present system that is causing much concern to every thinking mind. Inadequacies in personality development, internalisation of values of social cohesion and religious amity, human responsibility in maintaining sensitive human-nature relationship are now appearing before us in frightening proportions. The system Tagore envisioned is universally applicable. It could also be interpreted as a total acceptance of Vasudhaiva Kutumbakam in pragmatic terms. It’s time India reconsiders the basics of its education policy and systemic structures on this count: Is it nurturing the power of ideas and imagination among the learners, or stunting them? It’s time to consider how curiosity and creativity is encouraged and inspired to flourish without any shackles. It has an organic link to the process of growth and development of the country and its people.