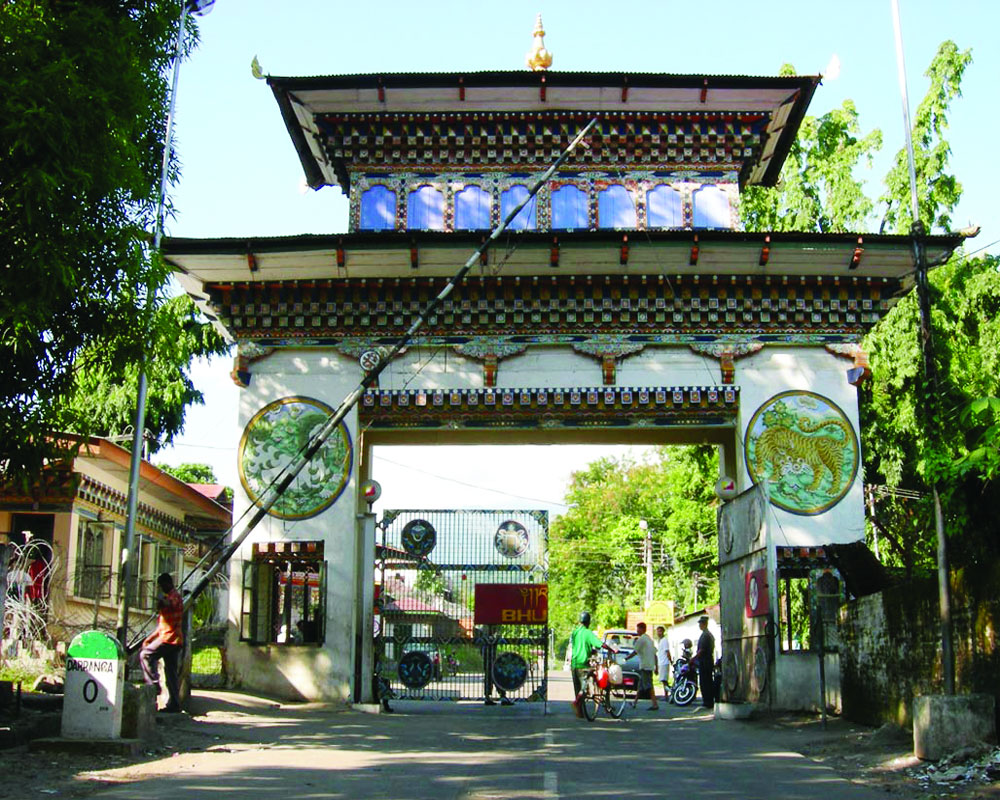 Trust in the monarchy is the most decisive factor for the stability of 50 years of diplomatic relationship between both nations. Still, New Delhi must exercise caution

Demonstrating deep ties between the two countries, Vijay Keshav Gokhale was on his third visit to Bhutan from November 18 to 20, following the installation of the third elected Government in Thimphu in October after multi-party democracy was introduced in the young Constitutional monarchy in 2007. In a bicameral system, the lower House has 47 seats and the upper House has 25 seats with 20 members directly elected and five nominated by the King. The upper House, also called the House of Review (HOR),  is not composed of elders alone but consists of talented and young members, like Justin Gurung, who was elected in 2008. According to Article 11 (Section 2) of the Constitution, matters of security, sovereignty and interests of the country will be reviewed by it. The Motor Vehicles Agreement of 2016, which was enacted in the 2014 Saarc Charter at Kathmandu and  passed by the lower House, was rejected by the HOR.

Each election has produced a new Government led by a different party. The new  Government formed by the Druk Nyamrup Tshogpa (DNT) is led by the popular surgeon Prime Minister Lotay Tshering. During the elections, foreign policy — Doklam and China — were non-issues. Development was the only issue. DNT wishes to diversify the economy moving beyond hydropower which has made it highly indebted to India. Tshering has said his party will be guided by King Jigme Khesar Namgyel Wangchuck (K5) and there will be no change in relations with India. But it does want to reduce dependence on India.

Gokhale met K5 and his father, (K4) Jigme Singye Wangchuck, the architect of modern Bhutan. He even invited Tshering to India on behalf of Prime Minister Modi, which was accepted by him for later this month due to the Ides of November, an inauspicious period which has delayed the sitting of the Parliament too. Gokhale, who played a key role in defusing the Doklam stand-off and creating the environment for Wuhan, is an old China hand, conscious of the sensitivities of India’s smaller neighbours. In Thimphu, he said India attaches highest priority to further expanding its unique ties of friendship and cooperation based on priorities of the Royal Government of Bhutan. He also assured the Government that India would support the 12th Five Year plan, which is a top priority of the Tshering Government. For the 11th Plan, India gave Rs 4,500 crore plus another Rs 50 crore as an economic stimulus.

DNT had pledged to fulfil 25 of its commitments to its people within 120 days. Some of these are removing five per cent voucher tax, free lunch in all schools, free access to online data, instituting a Fourth Pay Commission, protection farmers’ crops and so on. A  flagship project unique to Bhutan is Gross National Happiness, a K4 brainchild which is uplinked with the 12th Plan and aligned with the Government’s 25 pledges. Former President Pranab Mukherjee spoke in New Delhi about rising economies and the receding happiness syndrome while discussing the World Happiness Index. The GNH concept is a work in progress and according to the GNH Planning Commission, the trick is to find out who is unhappy, where are they and what is the reason, the mission being to achieve “Always Happy Bhutan.”

Although DNT’s election manifesto referred to narrowing the  gap (inequality) between the developed West and the less developed East, its Vision 2045 Document is modestly ambitious. Happily, the North-South divide originating from the alleged expulsion of 100,000 Bhupalese (Bhutanese of Nepali origin) in the early 1990s is no longer an issue with the present generation of the Bhupalese who are well integrated.

Their Nepali identity is protected with no discrimination. Some 100,000 Bhupalese enjoy equal freedom and privileges that the Bhutanese do to make the reconciliation complete. But the South still votes for Bhupalese candidates. The exodus of the 1990s got linked with illegal immigrants and  southern insurgency which called for a multi-party democracy. The Sikkim story, too, was  enmeshed with this forgotten  but unfortunate  chapter of Bhutanese history.

According to a former member of the HOR, the Bhutanese attitude towards India changed further positively after Doklam; though some younger nationals did not like Indian ‘interference’ even as  a majority was unaware of the stand-off on their soil. Some Bhutanese want to settle the border issue with China though 24 rounds of border talks — three more than India-China border talks — have yielded no results. The 25th round was to be held last year but could not be scheduled due to Doklam. It could happen in what is left of this year. The Chinese have been for long, offering to swap 500 sq km of disputed territory in the north with 89 sq km of strategically valuable  Doklam.

A reflection of the positive change in India-Bhutan relations was the renegotiation of the Treaty of Perpetual Peace and Friendship of 1949 in its new incarnation of 2007, where the clause ‘Bhutan will be guided by India in its external relations’, was removed and replaced by ‘cooperating closely on issues relating to national interest, including neither country allowing use of territory harmful to national security and interests of the other’. Not many Bhutanese are aware of this Treaty. There is no undercurrent of anti-India sentiment; though on social media, some youth resent over-dependence on India. Of the 432,000 registered voters, 400,000 have Facebook accounts. Tshering has warned to take action against anonymous writers causing disharmony in society . This has become the DNT’s 26th pledge.

India and Bhutan’s border disputes (only two countries with which China has not settled the boundary question) with China are intertwined. The two tri-junctions in the East and West involving India, China and Bhutan  have not been determined, The China-Bhutan border dispute has deep security implications for India.

The  Doklam bowl, where the face-off took place last year, lies in the crucial Chumbi valley where the Chinese have been attempting to occupy the Jampheri Ridge, which overlooks the Siliguri corridor. They  have been also trying to build a road to the disputed tri-junction. China is keen that Bhutan desegregates its border dispute from India’s. Doklam was an attempt to present a fait accompli.

Fifty years of India-Bhutan relations, which are based on a sound foundation, is being celebrated this year. Trust in monarchy is the most decisive factor for the stability of these relations. Just how important Bhutan is for India was highlighted by Prime Minister Modi making his first foreign visit to Bhutan. Still New Delhi has to be extra sensitive to Thimphu’s heartbeat.