In search of harmony

In search of harmony 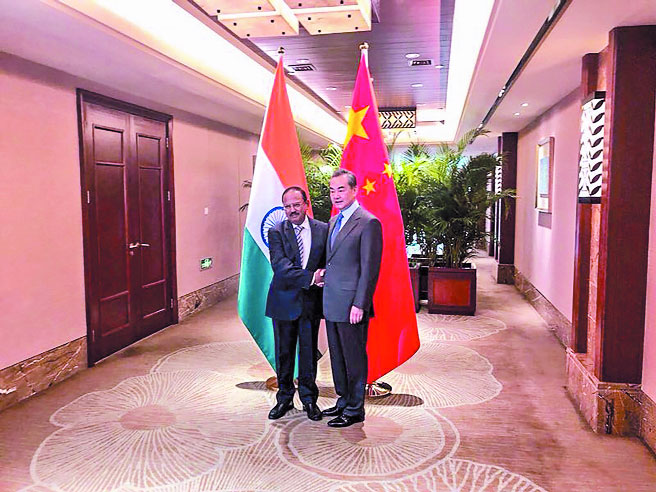 The 21st round of India-China border talks saw positive signals from both sides. But for any meaningful resolution, managing relative stability on the border has to be the way forward

India and China concluded the 21st round of border talks between November 23 and 24 at the beautiful and scenic city of Dujiangyan near Chengdu, the capital city of China’s south-western Sichuan Province. From the Indian side, the talks were led by National Security Advisor Ajit Doval. Chinese Foreign Minister Wang Yi was present from the other side. While Doval had  led the special representatives’ talks with China on the border issue thrice, for Wang Yi, this was the first round of talks after he succeeded state councillor Yang Jiechi earlier this year. Wang has became the state councillor, a rank higher than the Foreign Minister in the Chinese Government’s hierarchy, much like the fact that Doval now heads the newly-formed Strategic Policy Group (SPG), replacing the Cabinet Secretary.

The history of India-China border talks can be traced back to the 1960s, going back to the years of Jawaharlal Nehru and Zhou Enlai. Possibly the first such ‘formal discussion’ between both the countries on the border issue was held in April 1960 in New Delhi during  Zhou’s visit to India. The talks failed to resolve disputes, as was expressed in the press conference of April 25, 1960, held by Zhou in New Delhi. Two such discussions also took place in Beijing and Rangoon in 1960 but the outbreak of the 1962 war between India and China stalled the ongoing talks on the territorial dispute for the next two decades.

Some importance was attached to the subject when the then Chinese Foreign Minister, Huang Hua visited New Delhi in June 1981. Seven more rounds were held from 1981 to 1987. But despite expressing “common aspirations for the settlement of India-China border”, nothing concrete as such was achieved or agreed upon.  The dispute found “new attention” when both the countries agreed to form the Joint Working Group (JWG) in 1988 to address this issue. Around 15 rounds of negotiations were held under the JWG mechanism from 1988 to 2003.

While confidence-building measures (CBMs) dominated the agenda of the early talks of the JWG, the focus was shifted to the clarification of the Line of Actual Control (LAC) after 1999. Border talks between both the countries were rebooted to the existing mechanism of special representatives in 2003 after Prime Minister Atal Bihari Vajpayee’s visit to China.

In between, the Border Peace and Tranquility Agreement (BPTA) of 1993 has been existing as a larger framework for resolving problems bilaterally, through dialogue and negotiation between both countries. BPTA was a key step to transform the LAC into a normal border. First, it sought to promote peace through specific modes of conduct of the two Armed Forces. Second, it called for reduction in border deployment forces.

For the Chinese, admission, and later discussions, on the differences over border issue between both countries in more than five decades is more or less the formalisation of its stated position and disapproval of the McMahon Line forming the border. For India, the loss of territory to China (1962) and its concerns on sovereignty remain the valid expression of national interest. Interestingly, what is commonly referred to as the “border dispute” between both countries manifests itself in two very distinct and separate positions towards their border areas, shaped by forces of history and colonial legacy.

Having existed since 2003, the special representative border talks have played a critical role in India-China relations. Over the years, it has played a “key role”, helping to prevent any major flare-up along the 4,057-km LAC. This remains disputed with both sides having different perceptions based on history and colonial legacy. Nonetheless, the role of border talks has been very significant in maintaining “relative stability” of the region.

Over the years, the special representative talks have been able to reach certain agreements between both the countries on this particular issue. In 2005, both sides reached an agreement on the “political parameters and guiding principles” for the settlement of boundary dispute. Since then, both sides have been engaged in talks on a framework for boundary settlement (second round), followed by the actual demarcation of the border (third round).

Notably, both sides had agreed upon in 2012 that all boundary disputes at tri-junction points (with Bhutan, Myanmar and Arunachal Pradesh) would be addressed in consultation with third parties. During the Doklam stand-off last year in July, India consistently referred to the 2012 understanding between the special representatives on boundary alignment in the Sikkim sector, objecting to the efforts by the Chinese side to alter the existing status quo unilaterally.

Over the years, India and China have built upon a series of military confidence-building measures to maintain ‘peace and tranquility’ at the border, which include border personnel and Army flag meetings, a summit of the working mechanism for Consultation and Coordination on India-China Border Affairs and the recently agreed upon understanding of issuing “strategic guidance to their respective militaries” to enhance communications and make for effective border management.

In 2006, during the visit of the then Indian Defence Minister to China, both sides agreed and signed an MoU — the first ever between the two Defence Ministries — calling for high-level military exchanges, joint exercises, counter-terrorism and anti-piracy cooperation. As part of this, both concluded their joint military exercise in Kunming (2007) and Belgaum (2008). Then India participated as Observer State in the International Fleet review at Qingdao (2014), conducted joint exercises in Ladakh (2016) and held the first India-China meeting on bilateral security cooperation (2018). In the economic domain, too, between 2000 and 2010, bilateral trade rose 20-fold, making it the only area where relations have thrived. The India-China Strategic Economic Dialogue (SED) is in place to address concerns of trade deficit and seek wider economic cooperation between the countries.

Despite any key breakthrough, the  21st round of special representative talks marks “positive development” for both sides. They agreed to “intensify and advance” negotiation for a “fair, reasonable and mutually acceptable solution” to the disputed boundary. The Wuhan spirit, as agreed upon by Prime Minister Narendra Modi and President Xi Jinping, driving for a broader understanding, formed the pretext for border talks. Both the sides reiterated the way forward for a future as agreed upon in a “positive, constructive and forward-looking” manner.

As we look towards the future of India-China border talks, the most contested and complex issue between both countries faces some major challenges. First, over the three decades of border talks and negotiations from early references to leaving it for future generations to an early resolution of the dispute in recent times, we have  so far seen an unwillingness by both sides to move beyond a certain point. The sense of pessimism on either side has made the border a “stalemate” in India-China relations.

Second, over a period of time, the India-China  dispute, with their competing territorial claims on the border areas, has largely been internalised within their public discourse. It has made it complex to push up the issue towards any meaningful resolution to the larger acceptance of the domestic constituency. This, backed by overt nationalistic positions from both sides, makes the task even more challenging and vexatious. And third, both the sides seem uncertain about the cost-benefit attached with the resolution of the border dispute.

To sum up, the border dispute between India and China is undoubtedly linked with the strategic calculations from both sides, both gauging  the consequences of “mutual loss and mutual gain” in one way or the other. As both look towards any meaningful resolution of the dispute, managing “relative stability” at the border should be the only way to be practised by both sides in letter and spirit.

(The writer holds PhD from East Asian Studies, Jawaharlal Nehru University and teaches at the University of Delhi)