In the Dragon’s embrace

In the Dragon’s embrace 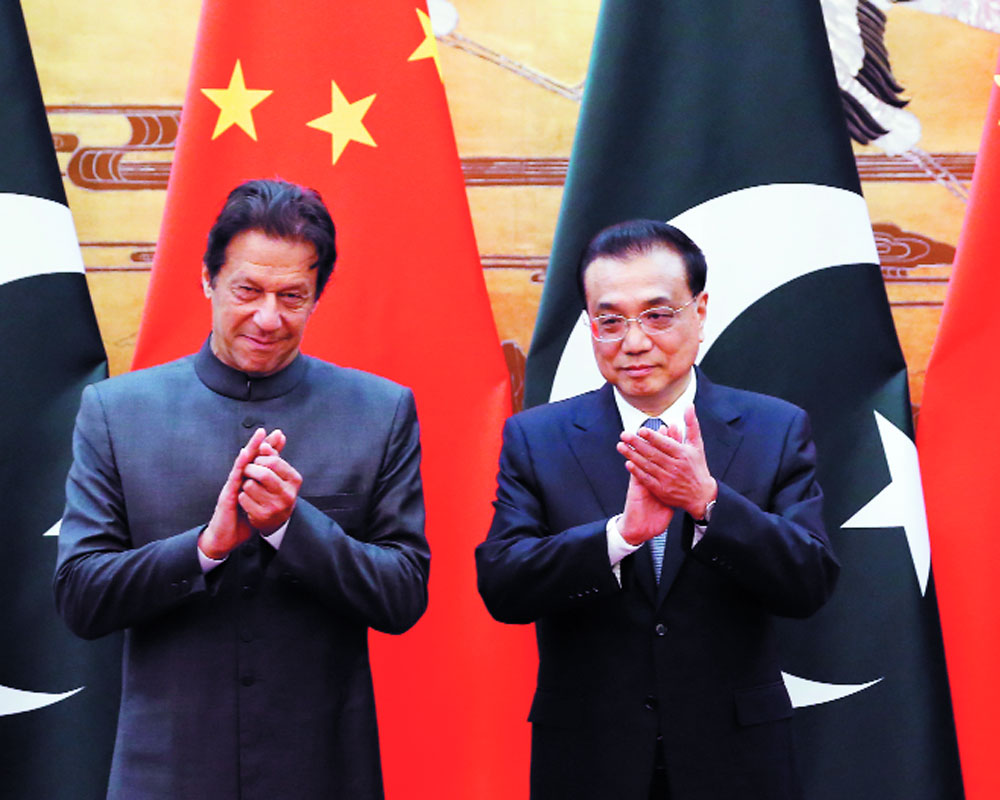 Imran Khan has received a reality bite: No sops, austerities and repayment of Chinese loans from 2019, all amidst a disintegrating society

Pakistan Prime Minister Imran Khan’s failure to renegotiate parts of the China-Pakistan Economic Corridor (CPEC) during his visit to Beijing in the first week of November affirms President Xi Jinping’s inflexible commitment to making China a leading world power by 2049, the centenary of communist rule in that country. The Border and Road Initiative (B&RI) and military power are keys to this goal.

While President Xi is extending the B&RI’s reach, he cannot be generous with countries that cannot push back like Malaysia, because China has been facing serious problems even prior to the spat with US President Donald Trump. As early as September 2016, the Bank for International Settlements warned that excessive credit growth in China could trigger a banking crisis within three years.

In May 2017, Moody’s Investors Service downgraded China’s credit ratings for the first time since 1989, saying growth would slow and debt would rise to 40 per cent of GDP by 2018, and 45 per cent by 2020. In October 2017, Standard & Poor’s cut China’s sovereign credit rating from A+ to AA- for the first time since 1999, because of risks from soaring debt. It lowered the rating on HSBC China, Hang Seng China and DBS Bank China Ltd. and warned that these banks would be “unlikely to avoid default should the nation default on its sovereign debt”. Bloomberg noted growing concerns over China’s ability to balance economic growth with cleaning up its financial sector. The International Monetary Fund (IMF) warned (December 2017) that China’s growing debt-dependency could trigger a new global financial crisis. Credit growth has surpassed GDP growth; corporate debt is 165 per cent of GDP; household debt has risen 15 percentage points of GDP in the past five years and is linked to asset-price speculation. A serious problem is ‘shadow banking’ that Moody’s in November 2017 put at $9.8 trillion (86.5 per cent of GDP).

While Beijing has cracked down on debt and the shadow banking sector, the credit squeeze on some sectors has driven companies to the offshore dollar bond market; borrowings touched $322 billion at the beginning of 2017, a 154 per cent increase from 2016, according to China International Capital Corp. By July 2018, the National Institute of Finance and Development, a regime-affiliated think tank, warned of “financial panic”, saying the economy may be on the edge of disaster due to increasing bond defaults, currency depreciation, tightening lending and liquidity, and trade tensions with the United States.

Beijing, meanwhile, will resist Washington’s economic aggression with its Yuan-denominated oil futures contracts which, since March 2018, have broken the US Dollar’s monopoly over the energy trade. Should the oil futures be convertible into gold, it would attract oil-producing nations like Russia, Venezuela, and Iran. Moscow and Beijing are also striving for a gold-backed post-Bretton Woods exchange system to curtail Dollar hegemony and evade US sanctions. Both have been accumulating gold reserves which, if greater than Washington’s, can seriously undermine the US Dollar.

Given the scale of China’s ambitions, it is not surprising that the joint communiqué appreciated the progress on early harvest projects, especially in the energy sector, and extolled the all-weather partnership in flowery language. Within Pakistan, the visit was perceived as a grand failure; Dawn columnist Adnan Rasool observed that the Pakistani State “is completely clueless regarding the larger objectives of the Belt and Road Initiative”, of which CPEC is only one portion.

The B&RI covers around 60 countries and broadly comprises three overland and three maritime routes. Most projects have not been contracted between governments but between Chinese companies and state-owned enterprises (SOEs). Hence, any attempt to renegotiate contracts (the promise on which Imran Khan came to power) would have to be firm by firm, which is virtually impossible. Moreover, any arbitration involved during renegotiations will go to the B&RI court in Xi’an, under Chinese law, so Islamabad would need a law firm to represent it on each contract to be renegotiated or contest the cases itself.

The B&RI, Rasool asserts, is a system which countries join to share the Chinese Dream of sustained growth for China through trade. Partner countries tie their economic destiny to that of China — as China flourishes, so do others. Since Beijing does the “heavy lifting”, it is the senior partner, but others must do their share. The CPEC is a series of projects that serve the larger B&RI scheme, and is not a credit line or bailout package. That is the crux of the matter.

Pakistan has to fix its own economy and use the B&RI to gain market access to other partner-countries, and boost its earnings. Perhaps such a clear understanding could have saved Sri Lanka, Myanmar, The Maldives, Tajikistan, Djibouti, and others from the indebtedness that forced them to make costly debt-for-equity deals with Beijing. With the Asian Development Bank estimating B&RI to cost over $26 trillion by 2030, and China’s foreign currency reserves hovering around $3 trillion, Beijing is in no position to cancel or mitigate debt.

Interestingly, the joint communiqué included a commitment by Islamabad to support China in safeguarding its sovereignty and security, and combating separatism, terrorism and extremism including the East Turkistan Islamic Movement (ETIM). Concerns for the CPEC’s security made Beijing build a counter-terrorism base in Afghanistan’s Wakhan Corridor in Badakhshan province, where Uyghur militants (ETIM) constitute a serious threat to Muslim-majority Xinjiang province. Kabul has refused to join the B&RI-CPEC because Islamabad continues to host the Taliban and Haqqani terrorist network which attack Afghanistan.

Pakistani doublespeak forced Beijing to take a tough line at the Financial Action Task Force in February 2018, where Pakistan was put on the watch list for financing terror. Imran Khan has received a reality bite: No sops, austerities, and repayment of Chinese loans from 2019, all amidst a disintegrating society as witnessed by the turmoil over Asia Bibi’s exoneration by the Supreme Court. Pakistan is caught in a pincer: Faith and a bleak economic landscape make uneasy bedfellows.