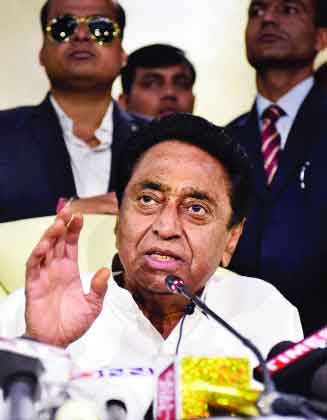 Be it divisive politics or a soft Hindutva, Congress must realise that it has to be radically different in its script for 2019

One would have expected a seasoned politician like Kamal Nath to tick the right boxes, especially after a hard-fought battle to become the Chief Minister of Madhya Pradesh, than sound like the voice box of Raj Thackeray. Nath may have been eager to please his voters by announcing a swift loan waiver and incentivising new businesses that hired 70 per cent locals as some of the means of job creation and kickstarting the local economy but did he frankly need to link the joblessness of the youth of his state to migrants coming from Uttar Pradesh and Bihar? By the way, this floating worker population is the reason why we are considered a cheap and competitive labour market. Mostly unorganised and often consigned to the lowest rung of the value chain, migrant labourers are unofficially estimated to contribute to at least nine per cent of the GDP and empower the economies of the states they choose to work in. Most importantly, they take up outlier jobs which locals also abhor. Yet they always end up getting vilified rather than appreciated for their multifarious skill sets. So the divisive economics played by the Congress has clearly backflushed on its carefully crafted comeback story. Be it divisive politics or a soft Hindutva, the Congress must realise that it cannot go far with a me-too formula and has to be radically different in its script for 2019.

Everybody understands that Chief Ministers have to prioritise local dynamics and Nath could have elucidated that need without dovetailing it with the tricky migrant issue. This was quickly pointed out by BJP’s state leader Narendra Singh Tomar, who said Nath’s remarks were highly misleading as industries in Madhya Pradesh have always given primacy to locals in jobs. Many other states, the BJP’s included, have some sort of an agreement of reserving a certain percentage of jobs for locals with industries. Karnataka recently approved a policy where every new public sector or private industrial unit would have to employ 70 per cent Kannadigas and 100 per cent locals at the Group D level, which includes, among others, security and housekeeping personnel, if it had to qualify for manufacturing sops. The Maharashtra government has about an 80 per cent quota for locals. Gujarat Chief Minister Vijay Rupani has said that manufacturing as well as service sector entrepreneurs wanting to start their operation in the state must recruit 80 per cent locals. His government has even proposed a law that will make it compulsory for industrialists to recruit 25 per cent of the required manpower from the area where they set up a new unit. Himachal has local work quotas as has Telangana. Now the Sikkimese want job protection for themselves too. Although, protectionist measures can only lead to insular federalism and in principle are a violation of fundamental rights — a Tamil labourer at a Volvo plant in Karnataka wondered if we were making countries out of states within India — fact is local aspirations have to be assuaged without riling up sensitivities.

The Congress, at this point of time, needs to be more politically expedient as it looks to be a catalyst for a grand anti-BJP front. What Nath has done by drawing in migrant labourers from Uttar Pradesh and Bihar into the conversation is upset Samajwadi Party president Akhilesh Yadav, who was a Congress ally in the Uttar Pradesh Assembly polls, and the RJD. In no mood to allocate seats to the Congress and delicately sorting out seat-sharing with the BSP, Yadav reminded that leaders issuing statements targeting people from his state should remember that Uttar Pradesh was the bellwether for the Lok Sabha polls. The Congress needs to score points, not burden itself with self-goals.