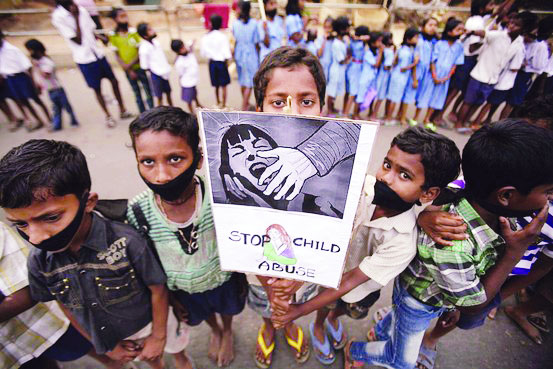 Nationwide issues and concerns that our children are confronting should not be camouflaged by larger agendas, interests or biases of political parties

In the present world of hostilities, discrimination, violence, harassment and negligence, being a child is no child’s play. Unaware of their rights and often devoid of voice, children and their issues need direct attention from the State and society at large.

Development indices show that India has failed to protect the most vulnerable section — its children. An imperative query that needs highlighting is: Where do childrens’ issues rank in the ambit of political discourse and State priorities?

In a modern society, children are the ‘subalterns’ that Spivak (1988) had discussed: They have no voice to ‘speak’ or make themselves heard from either the rights-based or protectionist perspective. This sociological situation is further worsened by the absence of linkages between the rising menace of exploitation and violence perpetrated on children and the lack of political will in addressing children’s issues.

Statistics indicate that the overall picture of child protection in India is grimmer than expected. Every fifth child in the world lives in India, comprising 39 per cent of the country’s population. Alarmingly, in recent years, the country witnessed a rise in child exploitation cases. For instance, crimes against children have registered a shocking 180 per cent jump in five years between 2012 and 2016, as per the Crime in India, 2016 report of the National Crime Records Bureau (NCRB).

Similarly, child sexual abuse showed a worrying 142 per cent increase in recorded cases between 2015 and 2016. There is also a serious issue of growing pendency in investigations with criminal trials delayed for most crimes against children. Not surprisingly, conviction rates under the Protection of Children from Sexual Offences (POCSO) Act, 2012, stand at 29.6 per cent, with pendency being 89 per cent.

It’s important to explore why our political landscape places the dynamics of our children at the bottom of their priority list. Firstly, ignorance stems from the basic premise that children cannot vote. Thereby, advocating their issues may seem disadvantageous for our political parties whose agendas are driven by an enthusiasm to expand  their vote bank.

Secondly, the lack of immediate tangible impact. Political motivation arises from the instantaneous and quantifiable impact that can be exploited to further their chances of being elected and re-elected. The impact of working on most child-related issues, however, has a vital but gradual ripple effect cascading over many years. For example, investing in children’s education today will only accrue returns a decade or so down the line.

Thirdly, children’s issues are perceived as ‘personal’ and not part of the political realm. It’s an inconvenient national truth that no one wants to advocate the core children’s issues due to the prevailing perception that it’s a family matter and that only the family must address them.

The vicious cycle of silence, stigmatisation and systemic violence fosters a ‘culture of compromise’ wherein most pressing issues of children are neglected and/or dealt with an irresponsible or casual approach, without a sense of urgency.

Consider the manner in which political decision-making is being pushed back in the Anti-Trafficking Bill, 2018, due to the upsurge of rivalry and one-upmanship between political parties. The Bill is a crucial step in providing a comprehensive legal framework for protecting millions of vulnerable children and women and in targeting the organised, multi-faceted nature of human trafficking. Nonetheless, the political class fails to comprehend the urgency of closing ranks in clearing the Bill.

Sweeping children’s issues under the carpet for years has resulted in heinous crimes like the recent Muzaffarpur shelter home rape case in Bihar, where 33 girls were repeatedly drugged, raped and forced to sleep naked. The owner of the shelter home allegedly had strong political connections. The decades-long political and societal neglect has posed an insurmountable challenge to the polity while resuting in irreversible loss of childhood for the victims. Such incidents demonstrate how the system and people in power do not prioritise children’s issues in governance and decision-making, thereby pushing children onto the political back-burner.

Accordingly, it’s critical to assert that the nationwide issues and concerns confronting the country’s most vulnerable, marginalised children should not be camouflaged by the larger political agendas, interests or biases of different political parties. By combatting the culture of silence, compromise and impunity, and making children’s issues a political and national priority, we can break the barriers in attaining a just and child-friendly country.

Nobel Laureate Kailash Satyarthi summed up the situation succinctly: “Children and their issues need to be addressed now. Politicians can wait for the next election but children cannot wait for the next day or even the next hour.”

(The writer is a policy researcher and child rights activist)