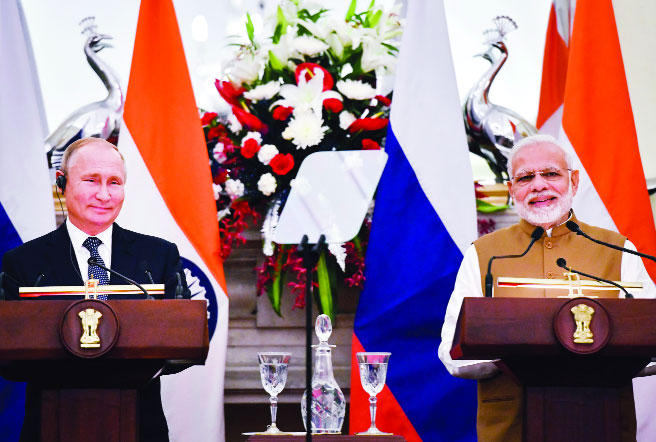 The signing of the deal for S-400 air defence systems worth $5.43 billion earlier this month  between India and Russia is significant in many ways. It is not just another deal but an exemplification of the coming of age of a regional powerhouse  which is now confident of its moves and does its homework well before taking calculated risks.

More than its efficacy of being a technological marvel, which has the potential to neutralise almost all kinds of aerial threats emanating from China, Pakistan or Pakistan-based radical terror groups, the purchase of S-400 is the pinnacle of India’s diplomatic statecraft wherein it meandered most skillfully through the tumultuous contours of American sanctions and yet reached its objective without antagonising too many.

At best, there will be awe; at worse, there will be grudging acknowledgement of India’s grit beneath the soft smiles. But punitive sanctions can be ruled out for the moment. The outcome, it seems, has been thought out by the Modi Administration to the end before throwing the dice.

The acquisition of S-400, coupled with the Indo-Israeli project on the development of Medium-Range Surface-to-Air Missile (MR-SAM), in addition to the progress on development of indigenous anti-ballistic missile systems, namely Advanced Air Defence and Prithvi Air Defence, would invariably make India much better equipped in air defence capabilities than it was a few years back.

It is generally not easy to buy weapon systems or to even do businesses with a country on which sanctions have been imposed by the US Administration. Among others, the Countering American Adversaries Through Sanctions Act (CAATSA) is aimed at imposing punitive sanctions against any country which would actively engage in ‘significant transactions’ with Russia’s defence and intelligence sectors. These sanctions are in addition to the sanctions imposed previously on Russia by the US Administration in the aftermath of the Ukraine-Russia face-off.

Incidentally, under the aegis of the Modi Administration, the S-400 deal is not the first but the second major business deal involving Russia despite American sanctions. The first was the acquisition of Essar Oil by Russia’s energy behemoth, Rosneft and its partners in a $12.9 billion deal in 2017 that stamped Russia’s first major investment in India’s downstream energy business. Though a private deal, it undoubtedly had blessings from both Governments since it involved similar meandering through American sanctions.

Defence deals involving billions of dollars do not happen at the blink of an eye. Signing of contracts is generally preceded by years of hard negotiations.  Interestingly, since 2015, even as the Modi Government continued with its price negotiations with Russia for the purchase of S-400 air defence systems, India also simultaneously continued to deepen its relation with the US, which was validated by America declaring India as a ‘major defence partner’ in 2016. This was followed by India’s eventual entry into the coveted Missile Technology Control Regime or MTCR club, Wassenaar Arrangement and Australia Group, albeit with strong support from the US, without which these entries would have been an uphill task. The Modi Administration deserves credit for successfully pursuing the US in supporting India’s candidature.

Recently, India was also accorded the STA-1 or Strategic Trade Authorisation Level-1 status by the US, thereby paving way for exports of high-tech equipment to India.  Additionally, India is now also eligible to avail critical high-end communication and imagery technologies from the US after New Delhi signed the Communication Compatibility and Security Agreement with the US.

In between, the Trump Administration renamed the Asia Pacific Command into the US Indo Pacific Command, a reflection of the increasing importance that Washington was giving to the regional powerhouse. All this while, the US was well aware of India’s negotiations with Russia on S-400, even as India made it clear about its reluctance to toe the US line on issues of sanctions on Iran and Russia.

For the US, even though its defence and energy companies would want CAATSA to be imposed vigorously in order to wean away many countries from Russian client list, the path for the same was not that easy. Apparently the Modi Government seems to have been successful in convincing the US that if it wants India to be a net provider of security in the Indo Pacific region, then it has to take care of India’s considerations.

The issue at stake is not just about S-400, but a legacy of issues related to a huge chunk of Indian weapons platforms being of Russian origin which needs spares and support from Russian manufacturers. Thus, while India would deepen its defence ties with the US, it is for sure that it would not ditch Russia either.

Further, it would not be wrong to presume that India also read well the divergence of views that exists between US President Trump and the US Congress on the issue of Russia. During his meeting with Russian President Vladimir Putin in Helsinki, Trump tweeted the following, “Our relationship with Russia has never been worse, thanks to many years of US foolishness and stupidity and now, the Rigged Witch Hunt!”

Eventually, it was his reluctance to go ahead with the implementation of CAATSA and India’s hardball negotiations that were perhaps the reasons for the US Congress to allow provisions for presidential waiver to sanctions on CAATSA under the NDAA-2019, specifically for countries like India, in the greater interest of protecting Indo-US alliance. If the US had apprehensions about the confidentiality of radar signatures of some of its critical aerial platforms sold to India, that concern has already been addressed by India through assurances of not sharing any such signature with Russia platforms like S-400.

After having declared India a ‘major defence partner’ it would have been difficult for the US to declare sanctions on India. Besides, the American experience of imposing sanctions on India post nuclear test in 1998 was proof enough that sanctions simply do not work.

India did not collapse and on the contrary emerged stronger while the US lost considerable business opportunities because of self-imposed sanctions. Eventually, the US was forced to lift the sanctions. Today’s India is far bigger economically and more resilient than what it was in 1998. The ball, as is being said, is in American court. It would be interesting to see what Trump eventually does.

Reports indicate that the Modi Administration might not just stop at purchase of S-400 system. Also on cards are deeper engagements with Russia with purchase of four additional upgraded Krivak Class frigates, 48 Mi-17V5 helicopters, collaboration on joint production of Ka-226 Helicopters and AK-103 assault rifles in India.

Rarely in the recent past has there been any country like India  which has been able to extract so much concession from the US even while successfully meandering through US sanctions to buy state-of-the-art defence systems from Russia. If elections could have been won on geopolitical statecraft, then the Modi Administration’s diplomatic brinkmanship would have been good enough for him to win the 2019 Lok Sabha elections.