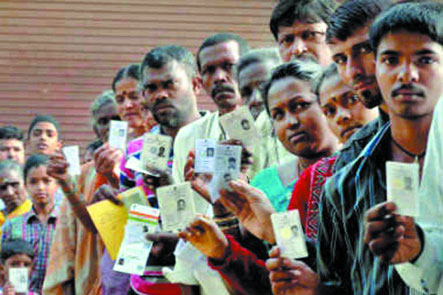 After an extensive tour of the State, the writers found that neither Narendra Modi nor Rahul Gandhi is likely to play more than a marginal role in influencing the outcome of the Madhya Pradesh election

The door is ajar in Madhya Pradesh — for the Bharatiya Janata Party (BJP) to exit and the Congress to enter the corridors of power in Bhopal. That is the impression we gathered after travelling about 2,500 kilometres, touching interior areas of all the regions, starting clockwise, from Malwa — both north and south, Madhya Bharath-Bhopal, Chambal-Gwalior, Bundelkhand, Bagelkhand and Mahakoshal between last week of October and the first week of November.

We met farmers, farm labour, young people from both urban and rural areas, government employees, traders, female farm workers as well as home makers, professionals such as doctors and lawyers, small businessmen, advocates, and students in campuses. In the process, inescapably, we also met persons who are affiliated to major political parties. We have chosen not to meet political leaders or opinion makers. We spoke to all these segments in all the regions of the State at length.

The method was not about administering of a questionnaire to generate quantitative data and arrive at percentages of vote share and number or seats of each party. It was about gathering of qualitative data in contradistinction to quantitative data. The method adopted was to conduct a series of rather long conversations with individuals and small groups (not exceeding six members) to understand their socio-economic condition in order to grasp what issues were salient for them and how their life experiences in grappling with those issues was likely to influence their voting choices.

It was to sniff the air, so to speak, and see which way the wind was blowing. The overwhelming sense that our team gathered was that not a single person among those we met was indifferent to the upcoming election. They’re fully aware of the power they wield with their participation in it. Polling in this election, therefore, is likely to be on the higher side.

Acute farm distress is evident from the conversations in the countryside. ‘Bhavantar’, a State Government’s scheme to give price support to farmers is unlikely to yield any substantial dividends to the ruling party. Deep resentment against price rise across the State is palpable. Anger against demonetisation is likely to wound the ruling establishment in the forthcoming Assembly elections. Lack of employment opportunities has alienated the youth in both rural and urban areas.

In Malwa especially, the upper castes are decidedly opting to desert the BJP because of Chief Minister Shivraj Singh Chouhan’s 2016 ‘mai ka lal’ remark on the SC/ST reservations issue. Many rural women said they would wait for their menfolk and other family members to tell them whom to vote. Or perhaps they did not want to reveal their minds to the strangers from Hyderabad.

Significantly, Hindu-Muslim issues, Ram Mandir, the so-called Rafale and Vyapam scams did not find any resonance with the voters. Professionals did mention about the Narendra Modi Government’s attempts to weaken the constitutional institutions.

Words like ‘badlaav’ and ‘parivartan’ are spoken in high decibels across the State, more prominently in the countryside. People who claimed to have voted for the BJP last time said they wanted to shift to the Congress this time. However, Shivraj Singh Chouhan remains popular. Those who want to vote against the BJP, too, acknowledged his good work. He comes across as a much popular leader and more influential with the voter than Prime Minister Narendra Modi in Madhya Pradesh. However, the possibility of “Shivraj fatigue” neutralising the impact of his popularity and letting farm distress, price rise, unemployment and demonetisation effects to hurt the ruling party cannot be ruled out.

There is still a significant chunk of undecided voters in the State. A good number of them are likely to go along with the tide that becomes evident nearer the polling day. The majority of the BJP voters said they would vote in its favour to reward Chief Miniter Chouhan’s work and not because of the Prime Minister. Those who preferred the Congress were unconcerned about the Chief Ministerial face of the party. They are prepared to take anyone who the Congress decides as the Chief Minister after the elections.

Karyakartas of the saffron party, who participated in the conversations are assertive about the BJP’s winning chances. The Congress workers, on the other hand, are meek and lack confidence about their party’s victory. It is the common unattached public who are more emphatic about the Congress’ chances of forming the Government.

Those who wanted the BJP to win, do not think that an anti-incumbency could cut so deep as to unseat the party. But they’re prepared to accept that the party will return with much reduced strength in the 230-strong House, and the party’s candidates will win with reduced majorities in the constituencies. Even strong BJP supporters are not prepared to think that it will be an easy ride this time for the party. Political headwinds are strongly sensed by the BJP sympathisers and its cadre.

The Congress argument, if it has one, is not yet part of the political conversation among voters. Chouhan is at an advantage on this score as his work is known and talked about. Congress president, Rahul Gandhi, as a campaigner, is yet to make an impression in the State.

State Congress is organisationally an enfeebled entity as the party has been out of office for three consecutive terms. It is a divided house, unable to stitch together a narrative for the State or constituency, region specific variants of the campaign theme. The BJP is ahead on this score.

The large number of conversations we had across the State in essence revealed that the Madhya Pradesh election is not a wrestling contest between an incumbent BJP and a challenger Congress.

It is a spectacle of the two contenders with strong political headwinds in the form of anti-incumbency, farm distress, price rise, ill-effects of demonetisation, erosion of upper caste support, unemployment and consequent youth apathy, and, “Shivraj fatigue.”

Neither Prime Minister Modi nor Congress president Rahul Gandhi are likely to play more than a marginal role in influencing the outcome of the Madhya Pradesh poll. The Congress, our conversations across the State reveal, stands to benefit from the failure of the BJP to contend with the headwinds. And the headwinds are strong at the moment in the State.

(The authors are Managing Director and Executive Director respectively of RightFOLIO, a Hyderabad based Research and Policy Consultancy)