No salvation in shooting the reformist

No salvation in shooting the reformist 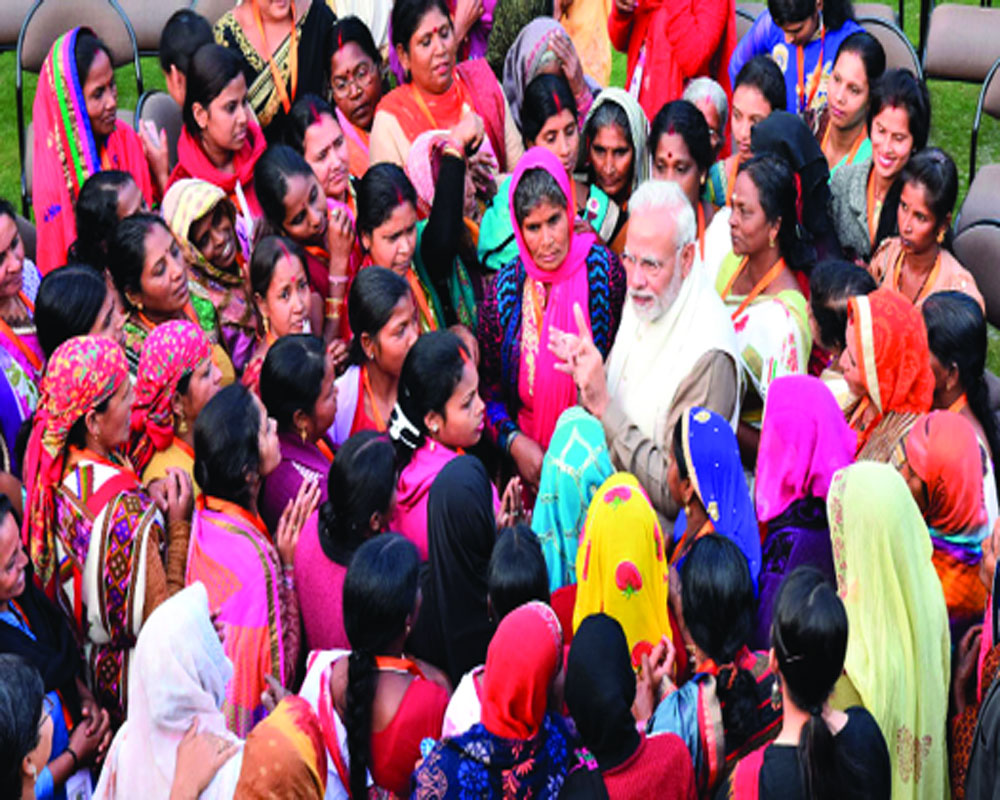 Post the BJP’s electoral debacle in five crucial States, there will be more movements among mainstream parties. Prime Minister Modi has to script a powerful narrative

If only the Supreme Court’s dismissal of the petition seeking a court-monitored probe into the Rafale deal had come before the State elections, it can be conjectured that the results might well have been different for the BJP, considering how minimal the ‘swing’ in Madhya Pradesh and Rajasthan was. For months, Congress chief Rahul Gandhi worked hard on building his campaign on a web of unsubstantiated allegations. This, to make corruption the central electoral issue and to spite Prime Minister Modi for doing so in 2014. Sadly, voters’ choice in the Hindi heartland reflected that five years were long enough a time to grant absolution to the Congress as collective amnesia set in. The voters’ fury that was felt on 2G and a series of scams of the UPA-II receded. The Lutyens’ clique of fixers, bureaucrats, bankers, cronies and media tried hard to undermine Modi’s inclusive agenda. But in hindsight, the systemic rot is too deeply entrenched in the body polity of the nation to weed it out in a single tenure.

Because, in contrast to previous regimes, the Modi Government delivered more to the bottom 70 per cent of the population through Direct Benefit Transfer and Ease of Living parameters. So, if the Prime Minister is not able to solve all of the nation’s problems in five years, should we vote for those who created those very problems over 70 years? Salvation does not lie in a change of regime; nor does the solution lie in a disparate Opposition uniting to ‘shoot the reformer’ for attempting to weed out a parallel economy, through a collective revival of the old establishment brigade of dynastic satraps, like the scam-tainted Yadavs, the DMK clan or the disproportionate assets-accused, like BSP supremo Mayawati.

To deal with the deluge of disenchantment, it’s time for Modi to invent a buoyant yet realistic narrative to address concerns of all sections of society that are seen moving away from the BJP’s fold — from farmers to first time voters to the middle classes and the traders. Modi must persist with an achievable sequel to the promise of vikas, while admitting to some regime lapses and spell out a roadmap with stated timelines. However, in the long-term, India needs to make the much-required shift towards a non-agrarian economy to match with other developing economies that are only 10 per cent reliant on agricultural income. That transition has not happened yet. What the voter now seeks with immediacy is redressal of economic woes instead of catchy sloganeering.

These may not be the best of times to make prophecies about 2019 or to admonish a ruling regime that is already in corrective mode. For that, Prime Minister Modi already has a battalion of Twitter economists who offer instant expertise on how to course-correct by the minute. We are aware that issues on the socio-economic and political front are riddled with much deeper complexities. Embedded within these contradictions are tectonic shifts in the offing that can alter India’s political architecture. While Modi remains the front-runner candidate for 2019, despite the loss of three saffron bastions, popularity ratings between him and his closest rival are steadily narrowing, establishing the Congress as a natural fulcrum for any anti-Modi grand alliance.

So, one can only expect more attrition and exodus in mainstream parties while alliance partners of the BJP can be expected to make more upstartish demands. Also, expectations are high about a huge shift and shuffle in the BJP’s voter base that was at its optimal saturation point in 2014. This is the time to woo back the core voter base through speedy redressal of livelihood issues. While local anti-incumbency in the three heartland States is not necessarily reflective of a trend reversal at the national level, there are some inferences to draw from the just-concluded State elections. The lifeline the BJP needs to infuse is some instant economic deliverables, even if it means that fiscal deficit figures exceed the target in an election year. The Government must go for enhanced spending over the next two months; announce income-support schemes along with farm loan-waivers in the interim in a bid for competitive populism; announce subsidies on fuel; cut interest rates and provide tax relief to the citizens, especially the middle class.

Because, should it be Modi 2.0, he will have all of five years to rectify fiscal profligacy. The Centre needs to boost capital spending. Even if it is at a deficit of 4.5 per cent of the GDP, it’s fine when the objective is to push the growth rate. Spending on roads, affordable housing, construction, irrigation, rural electrification, broadband, farm produce godowns and cold storages and mass rapid transit systems will help boost labour-intensive sectors that create employment. This will help yield social and political dividends. So, the Centre should hope that a pliant RBI Governor agrees to transfer excess reserves to the Government — this is much-needed to spend on growth and to fund MSMEs in order to ease sectoral distress.

With the industry’s reluctance to spend on capex, who else will spend if not the Government? So, if the Government of India’s investments augment growth, that translates into higher revenues, deficits would take care of themselves. Because despite achieving optimal targets in affordable housing, rural electrification and Modicare schemes, investing in public and household assets alone has not helped the ruling party’s electoral cause. This assumption is validated through recent losses in the heartland States which came from the rural voters, who account for about 74 per cent of the electorate. Farm distress is an obstinate problem that has persisted since decades with no magic wand.

As time is running out, in order to win back support among India’s 263 million farmers, even if as much as four trillion rupees ($56.5 billion) in loans are written off in a bid at competitive populism, it is not unusual in an election year to resort to such quick-fixes. This was the eventuality resorted to even by the previous Congress-led UPA, which waived loans worth nearly 720 billion rupees in 2008 that helped it return to power in 2009. While the BJP-led NDA succeeded in keeping food inflation low, this came at the cost of compromising on farmers’ remuneration. However, income-support schemes, enhancing non-agricultural employment, generating gainful urbanisation and funding more employment-intensive projects should be long-term solutions.

If the BJP-led NDA was beset with legacy issues of policy paralysis, reckless lending and mounting NPAs, the successive regime, which could well be another Modi-led Government, would also inherit the negative legacies of the present regime. The worst of them is that institutional heads did not adhere to the dharma of bureaucratic discipline by resolving conflicts within closed doors but took an adversarial stance with the Government. This sent out signals of erosion of the central authority like the open revolt in the Supreme Court, the CBI and the RBI as also the embarrassment of successive economists resigning “for personal reasons.” The other inherent problem for the next regime, though not a ‘legacy’ one, will also be that despite retaining the lead in being the fastest growing economy at 7.3 per cent, India will need to accelerate growth to nine per cent in future for any elected Government to fulfill its commitment in jobs for all, which will remain the biggest challenge.

However, the current dilemma is that if a large section of the BJP’s core voter base remains anti-incumbent, where will incremental votes come from? Aside from redressal of farmers issues, 100 million millennials who will be first-time voters are unenthused as compared to first-time voters of 2014 because of under-employment. And despite Modi’s best intent, triple talaq is unlikely to make Muslim women politically beholden to the BJP, even as the minorities will continue to stay with secular parties. It is because the perception of intolerance has become synonymous with the regime. Despite major strides taken by this Government in financial inclusion, the success of many social initiatives has not got prominence. False narratives have obscured achievements.

The other vital question is to what extent will the BJP infuse nationalist issues and concerns of migrant infiltration, as dictated by its ideological parent, the RSS, or attempt a revival of religious issues of the 1990s? A recent survey showed that reviving the mandir mudda holds only 11 per cent traction as issues of livelihood have gained primacy. Supportive evidence of this is the fact that the BJP fared badly in areas where Yogi Adityanath campaigned. He hijacked the development narrative with a parochial one, which showed a disconnect and apathy to livelihood issues. The party, in its re-strategising bid, is unlikely to switch track completely to issues of faith, as man cannot live by prayer alone. Only economic deliverables will convert to votes.

The BJP will enter the kurukshetra of 2019 with five brahmastras in hand: Its mascot Modi; powerful messaging being planned to undo misinformation spread by Opposition; some anticipated quick-wins with a pre-poll spending spree on welfarism  and putting more money into the hands of rural voters and urban middle class; splurging on campaign spend with its huge financial war-chest; and the combined manpower resources of six crore karyakartas of the BJP-RSS combine, so as to fire on all fronts.

Let’s not forget that the Modi-Shah duo lost the crucial States of Bihar and Delhi three years ago only to resurrect by course-correcting fast enough to expand the BJP’s national footprint into 19 States before the recent loss of three States. Sadly, Governments in power only heed the voice of their voter when on edge. The prospects currently may not be one of ‘India shining’, reminiscent of the negative associations with 2004, but it will surely be an ‘India dimming’, should a politically and ideologically incoherent “coalition of rivals” come to power in 2019, which would be more disastrous. So think twice why it must be Modi once more.

(The writer is an author and columnist)