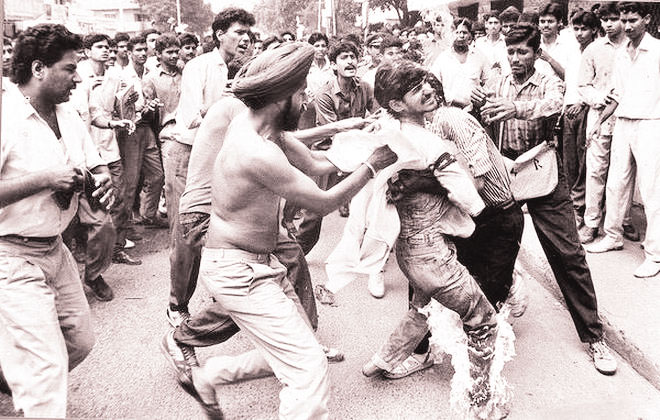 One of main reasons for the negative image of police in the public mind is its use of unbridled force against ordinary citizens. It is in this context that the use of non-violent force should be a crucial tactical measure

Long before New Delhi’s Connaught Place was renamed as Rajiv Chowk, for a short while, another Rajiv Chowk, also in Delhi, hit the headlines. But it was a different Rajiv and a different Chowk. That happened to be more than 25 years ago. I am recalling an almost spontaneous student agitation launched in the wake of the announcement of  reservations for certain classes. Rajiv Goswami was the unsung hero of this agitation. One of the busiest crossings in south Delhi, outside AIIMS, was named after him as Rajiv Chowk by the student protestors.

Protests broke out all over the country after the announcement on August 7, 1990, but Delhi became the focal point of the

agitation. By and large, the agitation remained peaceful in Delhi, and protests did not go beyond blocking the traffic at important intersections, through sit-ins or dharnas.

The police was careful not to use any force to break those sit-ins. The students would move to some other location after a couple of hours. Traffic was indeed thrown out of gear, but then, the people understood, and in fact, some even empathised with their cause. This state of affairs continued for over a month, and as it appeared when the protests were loosing the steam, suddenly Rajiv Goswami, a commerce student of Deshbandhu College in south Delhi, in order to highlight the cause, attempted self-immolation.

The incident sent shock waves throughout the country and the agitation suddenly moved into a higher gear and was almost spinning out of control. Best possible medical attention was made available to Rajiv Goswami at the burns ward of Safdarjung hospital and the doctors were able to save him at that time, despite 85 per cent burns.

In the meantime, another immolation of one Surender Singh had taken place. Several such cases were being reported from different parts of the country and the entire atmosphere appeared to be moving towards a violent confrontation.

It was September 21, 1990 evening, during peak hours that a group of student protestors staged a sit-in at the AIIMS chowk. By this single move, they had virtually hit the jugular of the traffic in south Delhi. Life was completely disrupted. Efforts were made by the police directly and also with the help of Vice Chancellor of Delhi University to dissuade the students, but to no avail.

Instead of the sit-in melting away, after some time, students from various locations made a beeline for the venue, now named as Rajiv Chowk. The crowd had swelled to more than a thousand and more were joining enthusiastically. Their morale appeared to be high, food and durries were seen coming from the neighbourhood and all indicators pointed towards a long haul.

Rajiv Chowk made headlines daily, and as people suffered, the number of students continued to swell. The stalemate continued, even as the incidence of violence grew virtually by the hour. The media, mostly Print, had already started to say that it was going to be another Tiananmen Square.

Finally, on September 26 evening, the situation got precipitated after some violence had taken place. We were getting information that the students and those from the locality were now upwards of 3,000 and they had plenty of missiles and stones besides other material to resist the police. Despite provocations, the police still somehow wanted to avoid the use of force. It was around midnight that the police columns, fully-equipped with riot gear, started to move from all the four sides towards the Chowk in an extended formation.

All were under strict instructions not to use force. Street lights in the area had been broken or taken away by lumpen elements during the last few days of violence. There were only some portable lights and some from generators. As the force was moving in simultaneously from all the sides, in dark and silence, their numbers remained undetected, till they were right there on top at the venue.

The strategy at that time was to just push the students back without use of any force which ultimately paid off much to the surprise of the media as well as some of the police officers. As the students got hemmed in from all sides, realising that they had no other option and the force meant business, they panicked and began to court arrest in a peaceful

Media personnel were noticed commenting that they would have to rewrite their stories as in the reports drafted beforehand, they were only thinking of filling in the numbers of dead, injured and rounds fired et cetera. In fact, not only the media, everyone was mentally and psychologically prepared for violence and what the police had achieved was completely to the contrary. In fact, the news of the peaceful culmination of the siege came as a complete surprise and was an anti-climax for many. An extremely violent situation thus got resolved without any use of force.

Policing is one area of administration which on account of the very nature of its work, continues to draw most of the negatives.  And despite best efforts to rectify, the trend continues somehow.

general public. It is in this context that the use of non-violent force can become an important element of tactics. Though policemen are trained and expected to be patient, they are human beings, and at times do get provoked, which, of course, should be absolutely unacceptable.

It is for this reason that for riot control, there are exclusive and specialised units. But what invariably happens is that these specialised units get over-exposed through routine law and order deployment, and when the need arises, they start reacting and behaving like a police station staff.

Thus, what we usually see is not men of a uniformed force but individuals in uniform. But even if they have to act individually, they have to do so as per some orders and drills, and not take out their anger and frustrations on the general public.

The term non-violent force is not an oxymoron but a concept  which has been put to effective practical use. Cynics may have several doubts, but to explain the concept of non-violent force, one has to visualise a mother slapping her child. She can be said to have used force, but has she been violent? No. Use of force becomes violent when the force is applied with a sense of revenge, hostility, hatred, malice and rancour.

The difference is extremely subtle but it is the loss of this subtleness in crowd management, and the thought amongst some policemen to teach the public a lesson and punish them that  makes the use of force violent and sometimes even brutal. This is the source of most of the problems.  The need for a change in police methodology has assumed much greater importance. Rajiv Goswami later got married and also raised a small family, but finally left this world after 14 years of the incident.