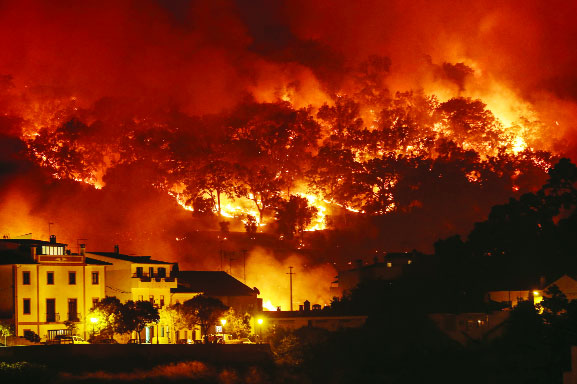 The scientific word is out: We have already passed the point where a return to the stable climate of the past 14,000 years is possible and we are on course for ‘hothouse earth’

It would be churlish to ask what took them so long. let us be grateful instead that the climate scientists are finally saying out loud what they all knew privately at least 10 years ago.

What 16 of them are now saying, in an article in the ‘Proceedings of the National Academy of Sciences is that if we soon don’t get off the highway we are currently travelling on, we will be irrevocably committed to a ‘Hothouse Earth’. How soon is ‘soon’ij Probably no more than 10 to 20 years away. That’s the last exit.

The article has the usual low-key scientific title: ‘Trajectories of the Earth System in the Anthropocene’. The authors never raise their voices but they do point out that the likeliest of those trajectories — the one we will stay on even if all the promises in the 2015 Paris Accord on climate — runs right off a cliff.

‘Hothouse Earth’ is not very hospitable to human life. Hundreds of millions or even a billion or two would probably survive but the damage to agricultural systems would be so extreme that billions more would die. (The authors don’t say this, of course. Putting it into words is too ‘alarmist’ — but the people who actually have to think about these contingencies, like the military in the developed countries, know it very well.)

What the authors are saying is that ‘global warming’ driven directly by human emissions of carbon dioxide and other greenhouse gases is only a part of the problem. In fact, it’s the smaller part. The real threat is the unstoppable natural ‘feedbacks’ triggered by the warming that we have caused that will take us up to the killing temperatures of Hothouse Earth.

They list 10 of them, the biggest being the loss of Arctic sea ice, the melting of the permafrost zone, dieback in both the boreal and the Amazon forests, and changes driven by warming in the ocean circulation system. Just triggering one or two of these feedbacks could cause enough additional warming to set off others like a row of toppling dominoes and take us up to those lethal temperatures within this century.

Now, this is not really news to climate scientists. When I was writing a book about climate change 10 years ago, I interviewed scores of them in half a dozen countries, including Dr Hans-Joachim Schellnhuber, one of the lead authors of this paper and then the director of the Potsdam Institute for Climate Impact Research in Germany (and Angela Merkel’s climate advisor).

He already knew all this stuff then. Everybody did, at Potsdam, at the Hadley Centre for Climate Change in England, at the National Center for Atmospheric Research in Boulder, Colorado and in universities that had a serious climate research programme. It was the point of departure, the underlying assumption of every conversation I had.

Yet the role of these feedbacks in the system was not discussed in the scientific journals, not included in the predictions of future warming issued every four or five years by the Intergovernmental Panel on Climate Change (IPCC) and definitely not part of the public debate. Why notij

If you spot smoke billowing out of a house, you don’t wait to see actual flames, check what substances are burning, and calculate the heat of the fire. You call the Fire Department immediately. But that’s not how science works.

When you make a statement in science, you have to be able to prove it, generally with hard numbers and testable predictions. The hard numbers simply weren’t available yet —and if you go public without that evidence, you will be torn to pieces by your scientific colleagues (who are also your rivals, of course).

So the climate scientists didn’t make grand assertions — but they did manage to get the threshold of two degrees Celsius higher global temperature adopted as the never-exceed target for the IPCC’s efforts to get the warming under control. (Nobody said publicly how the scientists arrived at that number but it was because they thought that +2 degrees Celsius was about where the feedbacks would start kicking in.)

The scale and trigger-points of the feedbacks have finally been calculated more or less and the news is just as bad as the scientists feared. We have already passed the point where a return to the stable climate of the past 14,000 years is possible and we are on course for Hothouse Earth.

The best we can do is try to stabilise the warming at or just below +2 degrees Celsius, and that will not be possible without major human interventions in the climate system. The ‘stabilised Earth’ is not a natural stopping place: Staying there would require “deep cuts in greenhouse gas emissions, protection and enhancement of biosphere carbon sinks, efforts to remove CO2 from the atmosphere, (and) possibly solar radiation management....”

You will notice that geo-engineering (solar radiation management) is already part of the package, and that it will be down to human beings to manage the entire

ecosystem to keep it ‘stable’. As Jim lovelock, the creator of Earth System Science (‘Gaia’), wrote 39 years ago, we may “wake up one day to find that (we have) the permanent lifelong job of planetary maintenance engineer.”

I haven’t bothered to ask Jim if we are there yet. Of course we are.