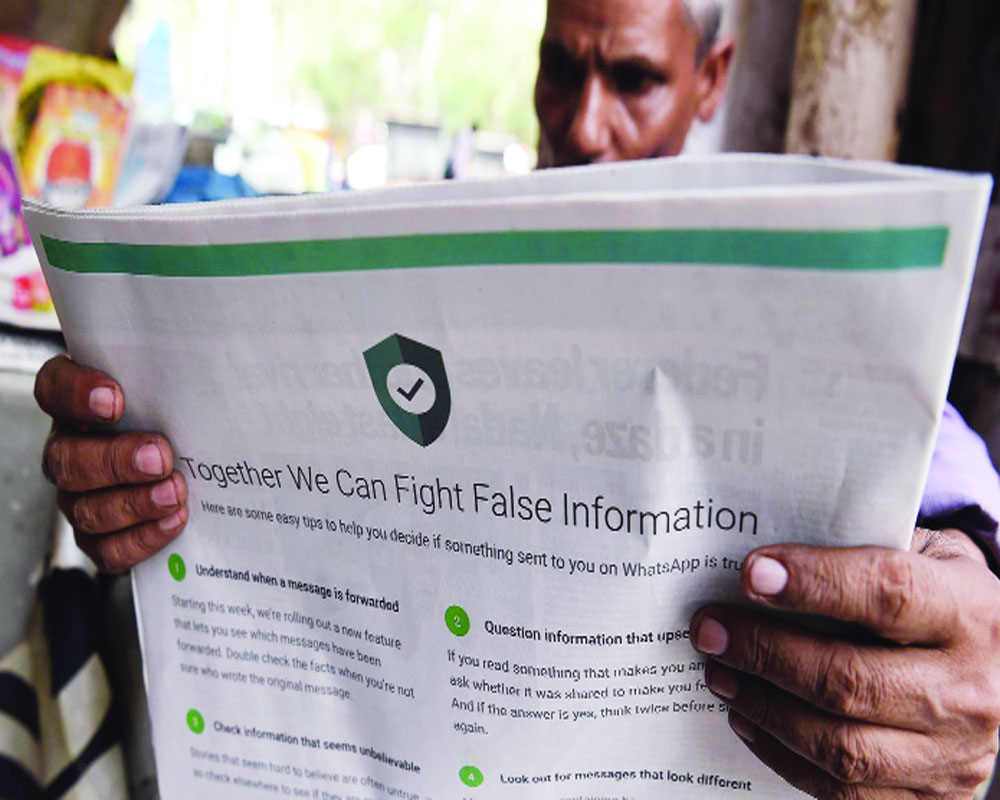 As India heads into an election year, we should be wary of the dangers posed by the spread of fake and malicious information that can upend the democratic process

First things first, I would like to wish all the readers of The Pioneer a merry Christmas and a Happy New Year. We all know that 2019 will be a very dramatic year for India because in less than 10 weeks, the Election Commission will announce the schedule for the next general election. And we will, hopefully, by the end of May, have the next Government in power. I do not have a crystal ball and I cannot gaze into the future and tell you who will be sworn into the office by President Ram Nath Kovind. But I can predict that the upcoming elections will be a dirty battle, full of innuendoes, unsubstantiated rumours and allegations of wrongdoings — whether true or false.

It is not as if these shenanigans have not taken place in elections before. Indeed ever since the Athenians invented the concept of democracy, elections have been dirty. But 2019 in India will be different because it will be the first truly digital election process. Yes, the Bharatiya Janata Party and Prime Minister Narendra Modi pioneered the usage of social media and online messaging applications in 2014. But in the past five years, as dramatically lower data prices and access to cheap Chinese-made mobile devices have enabled more than 300-350 million Indians access to a smartphone — a three-fold increase since the last elections — things will be very different.

First and foremost, levels of digital literacy in India are very poor. Keep in mind, this does not equate with literacy. A lack of digital literacy affects the highly educated people as well who tend to believe whatever they read on the internet. While there is some evidence to prove that people are less likely to believe images on the internet — as they now know images can be manipulated — there are studies that show that people tend to believe information they read on the internet, especially one from a formal sounding uniform resource locator (URL) or web address.

The cynical among you and digital natives would always take a close look at the URL and see if it is real or fake, especially when it comes to financial transactions. But the rampant cases of phishing, where personal and financial information is stolen using fake websites that look deceptively like that of a real bank, are common. There are job hoaxes that are distressingly common online, especially in India.

And the problem is worst when it comes to news — it does not take much to create a fake or even malicious news site or video. With some snazzy editing and headline writing, along with stolen content, one can create a fake website for even a well-known media brand. For example, someone can create a dailypioneerr.com website and one’s brain might not even process the second ‘r’ in the domain name. And being a fake of an old and trusted brand, one might believe what he/she will read on such a fake website.

There is also a problem with ‘news apps,’ often embedded on a smartphone when one acquires it. These applications, which may or may not have been certified by a third party such as Google, can easily spread fake information in the guise of news to derive political benefit.

Now we know which country manufacturers all these devices. So, the pertinent question is: Can China manipulate the Indian electorate by spreading fake news? Short answer  yes. Of course, the current problem with many of these applications, which unlike services of WhatsApp, Facebook or Twitter, where there are redressal systems no matter how slow, is that they have no control. Some of them are also hiring hundreds of content creators to curate information that can move markets, such as spreading fake news on food items, cures for diseases and Indian politics.

And even if there is a redressal system, the timeline for an election, the actual physical voting day, is quite short. What if a fake video about a sex scandal of a popular politician got into your device at 8 am on the polling day, the exact time when the booths open?

Being a secondary scandal, the likelihood of such a video becoming viral, that is spreading rapidly, is extremely high. And what is known as ‘deep fake’ video technology exists today. You genuinely cannot make out if video or speech patterns have been faked. And when you add a fake logo of a respectable news organisation, the trust value goes up.

Even if such a video is discredited in two-three hours, a third of the polling day is over, and retractions take a lot longer to spread in the news cycle. The damage is done. You might have been disgusted with the said politician for being morally corrupt and might even have changed your vote. One does not need to look at just foreign powers for this. The propensity of political party’s information technology cell, to spread such information directly or through surrogates such as news websites in their control, is happening right now.

Given that many seats are close, even if a few thousand voters change their mind, vote or do not vote or even press the ‘None Of The Above’ (NOTA) button, it can swing a seat. And since most predictions have 2019 as a frightfully close election in the present scenario, this could dramatically alter the result of who comes to power.

So we know the problem, what can be done about it? First things first, some action has to be taken against smartphone news applications that are clearly being run out of China. One cannot check the veracity of every single news item and every single website. But there has to be some way of checking the ownership and editorial leadership of websites, just like print publications fall under the Press Council of India and are subject to defamation laws. Even television channels need clearance from the Home Ministry. There has to be some way of verifying information from websites.

The problem here, of course, is that some websites are clearly run by surrogates based abroad, and free speech absolutists would rather slit their wrists than allow moderated content in India. And this also leads to the question: Who moderates the websites? Can a Government stop access to websites and information it feels distinctly uncomfortable with even if the news items are true? Or do we take the nuclear option and restrict internet access 48 hours before polling?

There are no easy answers and frankly, it might be too late to do much ahead of the 2019 elections. But this is a problem. A problem that we must all accept and so should the Election Commission of India.