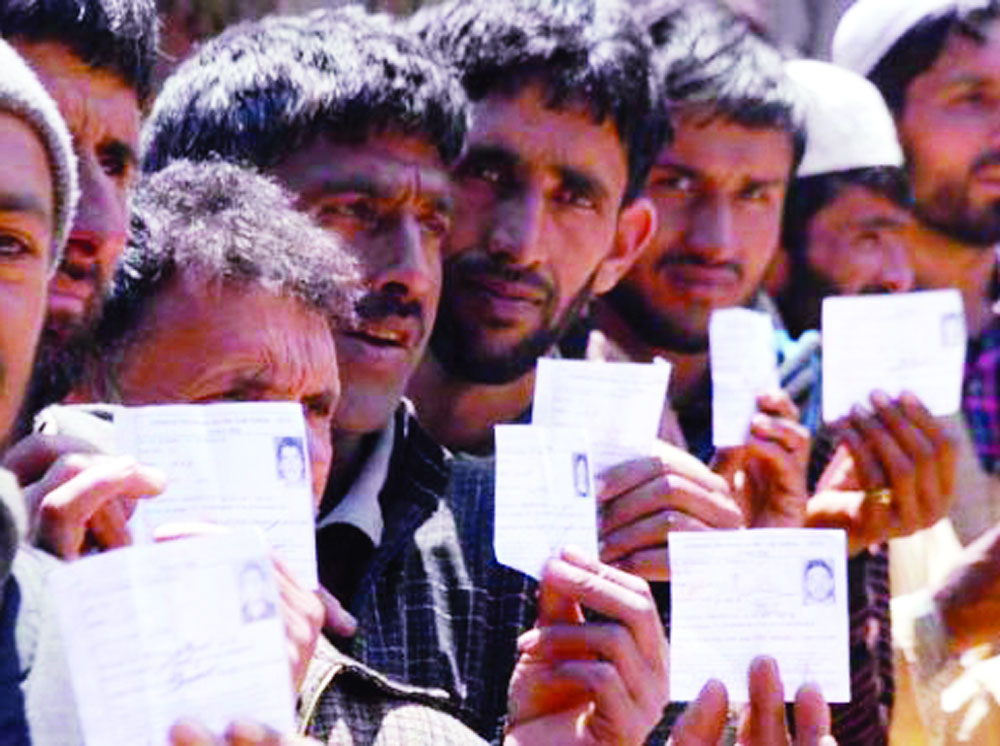 As Jammu & Kashmir gears up for the panchayat and local body elections, all efforts must be made for peaceful conduct of the polls. A breakthrough will mean a big victory for democracy and defeat of terrorists and separatist elements

On August 31, the State Administrative Council (SAC), led by newly-appointed Jammu & Kashmir Governor Satya Pal Malik announced that elections to urban local bodies (ULB) will be held in four phases in the first week of October, while Panchayat elections would be conducted in eight phases — from November 8 to December 4, 2018. The SAC requested the chief electoral officer to fine-tune the dates accordingly in view of the terrorist threats to the State.

The SAC also announced a grant of one month extra salary and insurance to polling officers, considering threats from terrorist outfits. Simultaneously, the Government will also educate the voters about the significance of local body (LB) elections as several important decisions can be taken by them instead of waiting for the State Government. The local bodies can also utilise funds sanctioned by Central and State Governments.

In the 2011 Panchayat polls, more than 4,145 sarpanches and 29,000 panches were elected and the polling was more than 80 per cent. In the current elections, there are 78 municipal corporations, councils and committees and 4,490 panchayats and 35,096 panch wards.

Analysts feel that the first elections should be held in peaceful areas like Leh, Ladakh, Jammu and the areas abutting Kashmir, then in central Kashmir, and lastly, it should be held in south Kashmir, which is the stronghold of terrorists.

Security personnel mention that residents of south Kashmir are averse to elections and have anti-Government sentiments. Hence, it is expected that there will be more violence in south Kashmir and voter turnout will be less.

It was decided that electronic voting machines (EVMs) would be used in ULB elections, while the Panchayat elections would be conducted through ballot papers. Initially, the panches were electing the sarpanches, but this time, sarpaches too would be elected directly. Each voter will cast two votes — one for the panch and the other for the sarpanch.

The three foremost terrorist organisations, including the Lashkar-e-Tayyeba, Hizbul Mujahideen and Jaish-e-Mohammed, jointly warned the candidates, leaders of political parties and the masses not to participate in the elections. These terrorist outfits have different areas of operations and have numerous differences. But as the Inter Services Intelligence (ISI) is determined to sabotage the polls, it instructed these outfits to work jointly to disrupt the forthcoming elections. Posters threatening the villagers of dire consequences if they participate in the elections also appeared in the villages.

Riyaz Naikoo, present Chief Commander of Hizbul Mujahideen, cautioned through an 11-minute audio that “people who want to participate in polls should keep their shroud ready.” He also warned: “We have already stored hydrochloride acid and sulphuric acid. They should be ready for consequences.” The intelligence agencies have also cautioned that Pakistan-sponsored terrorist outfits will leave no stone unturned to disrupt the polls.

Syed Ali Shah Geelani, chairman of the Hurriyat Conference, also appealed to the people to boycott the impending local body elections. Mainstream political parties, except the Bharatiya Janata Party (BJP), have also stated that it is not the right time for elections. President of National Conference, Farooq Abdullah and People’s Democratic Party chief Mehbooba Mufti, also announced to boycott the forthcoming Panchayat and ULB elections until Central and State Governments ensure continuation of Article 35A in the State.

Leaders of political parties mentioned that candidates for the elections would be like “sitting ducks”, and in disturbed areas, it would be difficult to find candidates who would be willing to contest elections. In the last four years, 16 sarpanches and panches were killed by terrorists. Hence, several leaders may also avoid contesting the elections.

Union Defence Minister Nirmala Sitharaman and Army Chief General Bipin Rawat met Governor Malik in Srinagar on September 2 and discussed internal as well as external situation, which included infiltration by Pakistani terrorists and security situation in view of the forthcoming local body elections. They also discussed matters about road connectivity, which is important for the elections.

Security forces are aware of the ground situation and are making a comprehensive arrangement for the conduct of peaceful elections. Also, 237 companies of the Central Armed Police Force (CAPF), deployed for Amarnath Yatra, were instructed to remain in the Province till the local body polls are over.

Security agencies mention that there will be enough security personnel in the State, especially in troubled areas, but it is not feasible to provide security to all the candidates.

For the terrorists, family members of police personnel are easy targets. Terrorists suspect that the local police are providing pinpoint intelligence to the security forces  and, hence, they are able to exterminate more terrorists now.

The security forces annihilated over 200 terrorists in 2017 and 142 terrorists in last eight months. According to Director General Central Reserve Police Force (CRPF), Rajiv Rai Bhatnagar, although more local Kashmiris are joining terrorist organisations, the shelf-life of terrorists has considerably reduced — the number of terrorists is also reducing.

Besides tightening of security, the Government, good-intentioned NGOs and political leaders should also try to make a conducive atmosphere for successfull polling. They should try to win confidence of the masses. besides, there are several incomplete projects in the State that needs to be completed. Due attention must be given to other parts as well, particularly Jammu, Leh and Ladakh areas.

Intelligence reports suggest that the ISI is trying hard to infiltrate terrorists as security forces have successfully exterminated a large number of terrorists. The Pakistan Army may increase cross-border violations and may also instruct the Border Action Team (BAT) to take action against Indian security forces. Untrained Kashmiri youth are easily killed and their families become hostile to the terrorists. As the NIA is tightening its grip on terror financing, terrorists are compelled to loot banks and snatch weapons from security forces.

Analysts claim that extra security precautions should be taken  because if local body elections are conducted successfully, it will be construed as a defeat of terrorist organisations, secessionist

elements and political parties. Voter turnout is most crucial as it will also pave way for the forthcoming 2019 General Election.  Security forces must be vigilant and try to conduct local body elections peacefully. If executed without any disturbance, it will be a big victory of democracy and defeat of terrorist and separatist elements.

(The writer is a member of United Services Institute of India and Institute for Defence Studies and Analysis. Views expressed are personal)