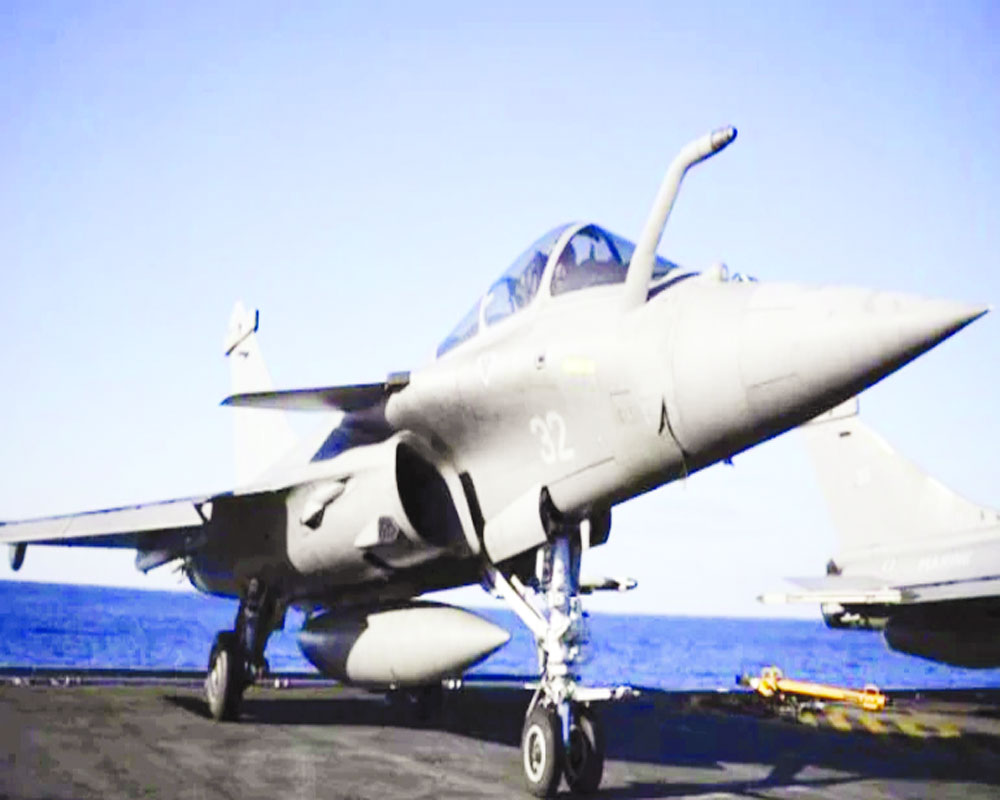 Row over Rafale could inflict a serious dent on defence preparedness. Government must aim to develop a robust defence industry with participation from the private sector and encourage foreign investment

Defence procurement has always been in the vortex of politics in India as the Opposition seeks to find chinks in such deals. Everyone remembers the Swedish Bofors Guns which, according to many experts, won India the Kargil War with Pakistan but had rocked the boat of the Rajiv Gandhi Government. Politics for electoral benefits precedes national security concerns when it comes to smelling corruption in defence deals.

To acquire power is the primary concern of the Opposition and for this reason, the Congress had made a big hue and cry over the signing of Government-to-Government agreement between France and India in April 2015 during Prime Minister Narendra Modi’s visit to France for the purchase of 36 Rafale aircraft at the cost of 7.8 million Euro, which approximately would cost around Rs 58,000 crore.

Congress president Rahul Gandhi has directly blamed the Prime Minister for indulging in “crony capitalism” and his entire party is in hyper mode to garner public opinion on this matter. The party has also filed a Public Interest Litigation in the Supreme Court, which came up for hearing on October 10. The Court has sought details of the decision-making process that resulted in the award of Rafale jet purchase to the French firm, Dassault Aviation in a sealed cover. The three-member Bench, headed by Chief Justice of India, Ranjan Gogoi, made it clear that it is not expressing any opinion on the suitability of the Rafale aircraft, but wants to be satisfied about the legitimacy of the decision-making process.

Cacophony on the Rafale deal has cast a cloud on the country’s defence preparedness and our enemies are having a hearty laugh over our bickering. The country has already suffered during the past 15 years in defence preparedness. The Congress was in power for 10 years and itself has much explaining to do about its inaction.

It is, however, of utmost interest to review the parameters available in the public domain with a focus on India’s defence needs. The Air Force is awfully short of multi-purpose aircraft to meet external threats from two fronts. As against the requirement of 44 Squadrons, it has only 32 Squadrons (half of these squadrons are of vintage Mig 21, Jaguar and Mig 27, which are more than 40 to 55 years old)  to guard the Indian skies. Never ending controversies in defence purchases meant that our forces could never get the weapons to its full strength.

First, criticism from the Congress. The very next day after the deal was signed in April 2015, the Congress spokesperson raised the question of its cost and asked for making public the details of the agreement. He also questioned the escalation of cost of a single aircraft from Rs 715 crore to Rs 1,600 crore. The party blamed the Modi Government for bypassing the procurement procedure and smelled a rat over the signing of an agreement between Dassault, the manufacturer of Rafale, and the Anil Ambani-led Reliance defence firm for implementing the 50 per cent offset clause. The interview of former French President François Hollande to a French TV, about the Indian Government proposing the name of Reliance Defence for the offset clause, only added fuel to the fire and gave the Opposition another handle to beat the Government with.

The Government has stoutly rejected the allegations and questioned the rationale of comparing the two different base year prices even as it insisted that it got significantly better terms than those quoted in the original bid under the UPA, with a total saving of more than 1,600 million Euros (350 million Euros on the cost of aircraft with a further reported saving on weapons, allied maintenance and training package amounting to a around 1,300 million Euros or Rs 12,600 crore).

However, a cost breakdown of Rafale in the original bid under UPA and in the 36 aircraft in the Government-to-Government deal will never be available in the public domain due to the secrecy clause between the two Governments. The Government’s stand has been strongly supported by the serving Air Chief as well as his predecessor as they said that the two prices cannot be compared as these are being fully loaded with India-specific high-end technology. Former Defence Minister Sharad Pawar, too, has opined that he cannot level accusation unless he gets the proof.

Now let us examine it from the perspective of informed citizens. The Rafale aircraft was selected by the then UPA Government in 2012 over its other rivals. However, negotiations with Dassault dragged on over disagreements on warranty for aircraft to be produced by Hindustan Aeronautics Ltd (HAL). India wanted Dassault to ensure the quality of aircraft produced by HAL but Dassault refused to do so. The other cause of difference was HAL demanding three times the manpower days than offered by Dassault.

In January 2014, Dassault informed that the cost of each aircraft had increased by 120 million dollar (Rs 756 crore). There was no further action by the then UPA Government and in May 2014, the NDA dispensation took over. Soon thereafter, the Air Force seriously flagged the issue of replacing its ageing fleets before new Defence Minister Manohar Parrikar. This ultimately led to the signing of the Rafale deal as a Government-to-Government venture during the Prime Minister’s France visit in April 2015. The deal was thus an emergency response to the demand of the Air Force. The twin-engine Rafale combat jet is designed as a multi-role fighter for air-to-air and air-to-ground attack and is nuclear-capable. Its on-board electronic warfare systems can also perform reconnaissance and radar jamming roles.

If our leaders continue to be at each other’s throat then no Government can finalise the deal even in the next 50 years. There is also a catch in Hollande’s remarks. When asked by the French media about the conflict of interest involving former President’s partner Julie Gaye (whose film was funded by Anil Ambani) he took a diversionary tactics to escape. In international arms deals, firms do lobbying and Reliance must have been in touch with Dassault which should be none of our business. The air on this has been cleared by Dassault and the French Government.  It is a fact that the country’s enemies will try to derail this deal through clandestine planting of false reports directed at the doors of opposition leaders and in dinner gossips. Hence, the Government should seriously plan to develop a robust defence industry with private sector participation and encourage foreign investment with private players.

As for HAL, it has taken almost 33 years to develop ‘Tejas’. They will now face competition from private sector in the long-term which in effect is an opportunity for them.  Now Reliance,  Tata and  Adani,  all new in the defence sector, have forged alliances with foreign arms manufacturers and people should welcome this trend. The 50 percent offset clause in this deal should be used to develop the defence infrastructure in the country. Let us end the saga of mathematics of incompetence in defence procurement where incompetence plus incompetence equals incompetence.