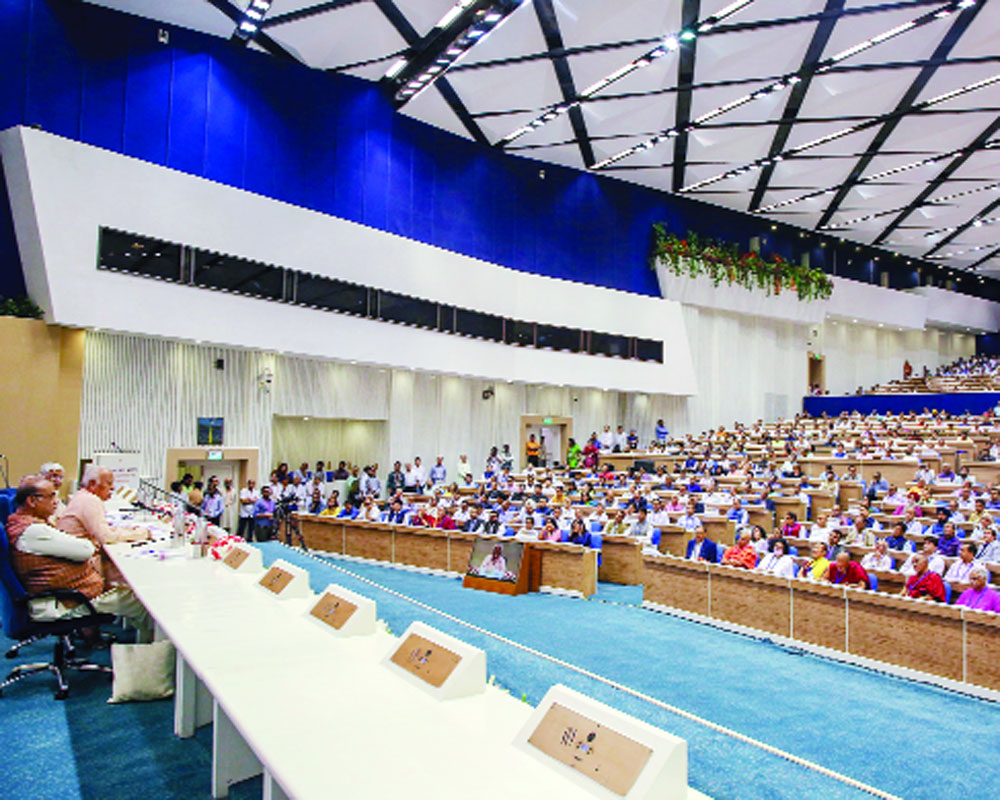 The Rashtriya Swayamsevak Sangh (RSS), which had been under sever criticism by a section of political leaders and the social ‘chatterati’, in an unprecedented move, arranged for a high-profile meeting in Delhi’s Vigyan Bhawan from September 17 to September 19. A galaxy of people from all walks of life, including foreigners, were invited. Opposition leaders, including Congress president Rahul Gandhi, too were invited but they refused to attend.

This writer, while on tour, got a call from Suresh Kulkarni, a self-effacing RSS national representative of the Sangh’s affiliate Vanvasi Kalyan Ashram, and a senior Pracharak, who asked him if he could attend this meet to know about his organisation’s philosophy on the “future of Bharat”. This  writer had been in touch with the Vanvasi Kalyan Ashram on related matters and agreed to attend the programme.

The meet got massive response, as the plenary hall of the Vigyan Bhawan, which has a seating capacity of 1,285, was full to its capacity during the three-day meet. RSS chief Mohan Bhagwat, as per the schedule of the programme, spoke for about one-and-half-hour each for two days.

He also solicited questions in writing, on topics that touched upon by him, that were handed over to the volunteers to be replied on the last day of the event. The Sarsanghchalak was heard with rapt attention by the audience.

The RSS chief was frank and spontaneously effortless in his discourse on a wide range of subjects. Those who heard him,  unanimously agreed that it was one of the finest speeches delivered by any Indian in the past few decades on issues close to their heart. The event will be remembered in the history of the RSS as one of the best exposition of its principles, philosophy of life, changes in approach on multiple issues from the past with a collaterally beneficial commentary on what the Indian culture is, and lofty ethos of sustaining a dignified human life.

On day one, Bhagwat started with establishment of the RSS and the life of Keshav Baliram Hedgewar, who founded the RSS in 1925 in Nagpur with the intention of promoting the concept of united India, rooted in Hindu ideology. After propounding the philosophy of the Sangh, he, step by step set aside prevailing misgivings about the organisation.

Bhagwat asserted that the RSS respects the National Flag and cited the example of 1936 Faizpur (Jalgaon district of Maharashtra) session of the Congress, in which  RSS volunteer Kishan Lal, one of the many who attended the session, hoisted the tricolor. He was praised by Jawaharlal Lal Nehru.

Bhagwat also refuted the criticism that the RSS was opposed to Mahatma Gandhi and cited many instances of the Sangh’s support to him and vice-versa. He stressed that the Sangh had no desire to impose itself on the country.

Further, the RSS chief mad eit clear that neither does the Sangh remote controls its affiliate organisations nor does it allows its office bearers to participate in political activities.

He asserted that the Sangh definitely raises issues of national security, like infiltration of foreigners. Individual members, however, are free to join any political party and espouse the cause of their chosen field.

The RSS, therefore, concentrates on transforming the individuals as good human beings to make a vibrant society. If this is ensured, nations around the world would be integrated as a world community — it is the bedrock of Hindutva and Indian civilisation. In nutshell, this is the crux of Hinduism.

The term ‘Hinduism’ never existed in Indian texts and was coined by foreign invaders. It came to use only in the seventh Century AD. Bhagwat asserted that Hindutva encompassed Indian Muslims as other forms of worship and that segregating people into different groups is the antithesis of the RSS’ values.

The foundation of Indian civilisational values is based on unity in diversity that is Vasudhaiva Kutumbakam, which means that the entire world is one single family. Without this very concept, the Sangh cannot exist. This is the biggest statement ever made by any Sangh chief. In doing so, Bhagwat set the record straight about his organistaion’s view on religion.

He, thus, effectively countered propaganda spread by few that the Sangh is anti-minority, especially an anti-Muslim body. He said that in RSS’ parlance, there is no scope for minoritism as it believes in oneness of the people.

On the last day, he declared his organisation’s support for all Constitutional provisions, laws and judicial interpretations and fully supported the reservation policy till the time those who are beneficiaries, renounce it themselves.

He also asserted that the RSS stands opposed to the caste system. He, however, categorically demanded that the Ram Temple should be made in Ayodhya as soon as possible as it has been proved beyond doubt that it is the birth place of Lord Rama, and if Muslims agree, it will strengthen the bond between the two communities.

The RSS chief also reiterated the views of the RSS on Jammu & Kashmir for abrogation of Article 370 and Article 35A and said that RSS volunteers are working with the local population to achieve social harmony.

However, he evaded a direct answer on the Supreme Court’s decision on Article 377 but said that he believed that an inclusive approach should be adopted on this. Mohan Bhagwat also supported the Government’s decision on the Court’s order on atrocities on SC/ST, but said that there should not be any discrimination and misuse of the Act.

Bhagwat deplored cow vigilantes for taking law into their hands but at the same time pitched the idea of ‘cow conservation’ so as to make small farmers self-sufficient.

The RSS supremo demanded a new population policy which should take into account demographic balance for a better future of the country. He also vehemently opposed the idea of choosing none of the above (NOTA) while voting.

On a question on conversion, he said that God is not for trade in the market — voluntary conversion is needed, devoid of any ulterior motive. On language issue, he asked the Hindi speaking States to adopt teaching of one non-Hindi language.

Overall, it was a good public relation exercise interspersed with a changed matrix vision in which the master speaker walked away with a gold medal.