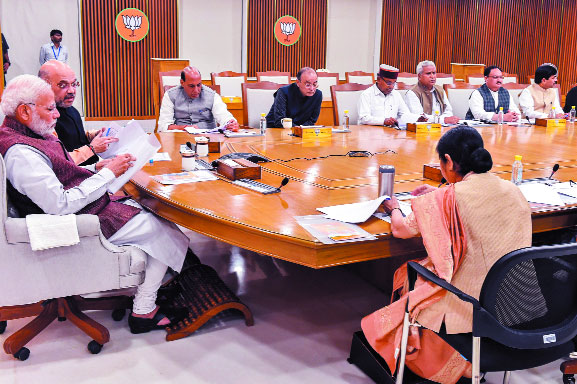 The much awaited “semi-finals” in the run up to the Parliamentary elections next year is all set to begin on Monday when Chhattisgarh goes for the first phase of Assembly elections for 18 seats in Naxal-hit districts, as part of the simultaneous polls in fours other crucial States — Madhya Pradesh, Rajasthan, Mizoram and Telangana.

The polls, however, have began with a Naxal attack where a BSF jawan was martyred when Maoists detonated an IED a day before the polls in Kanker. In another incident, a Maoist was gunned down in an encounter with police.

Security has been tightened in the eight districts going to polls in the first phase on Monday. Around one lakh security personnel have been deployed to ensure smooth conduct of elections.

Naxals have called for the boycott of polls in the State and have executed half a dozen attacks in the last 15 days, three of them major ones which left 13 people dead, including a cameraperson of national broadcaster Doordarshan.

The elections in this Hindi heartland is being touted as a Narendra Modi-Rahul Gandhi face-off as Modi exudes confidence of retaining power for second term in 2019 while Rahul looks to stop the Modi juggernaut by uniting Opposition parties.

If the Congress manages to upset its dominant rival in these Assembly polls, then it will be a big boost to the Opposition for the Lok Sabha polls, while a good show by the BJP will energise its cadre and give a fillip to its hopes of retaining the power at the Centre in 2019.

In 2013 Chhattisgarh Assembly polls, there was a difference of 10 seats between the BJP and the Congress, the difference between their vote share was just 0.75 per cent. The BJP is facing anti-incumbency, while the Congress is up against the challenge of the Ajit Jogi-Mayawati tie-up.

Jogi-Mayawati’s support base comprises mostly members of the SC community and if they get a few seats, it will be at the expense of the BJP. The BSP had won just one seat in the State last time, but had garnered a 4.27 per cent vote, which if it sticks to this time it could prove to be the decisive factor. Smaller regional coalitions — such as the one between the Gondwana Gantantra Party and the Samajwadi Party which had secured 1.5 7 per cent and 0.29 per cent votes in the last polls — are another key factors.

The Congress-BJP battle has become more bitter in the State after Congress’ working president Ramdayal Uikey switched sides to the BJP.

In MP, the contest is tough as the anti-incumbency is a big factor in the State with the Congress consistently doing well in the by-elections held in the last one-and-a-half year.

Madhya Pradesh has also had its share of twists with several switching of camps by various leaders. Among the notable switches, Sanjay Singh Masani, the brother-in-law of Madhya Pradesh Chief Minister Shivraj Singh Chouhan and senior BJP leader Sartaj Singh joined the Congress, while Premchand Guddu, a Dalit leader, joined the BJP.

Rajasthan seems to be a different battleground from MP and Chhattisgarh as a key statistic here is that since 1998, the Congress and the BJP have won Vidhan Sabha elections alternately, neither able to retain power for consecutive terms.

In the 2013 Rajasthan Assembly polls, the BJP had won 45.17 per cent votes, while the Congress had got 33.07 per cent. However, voters here traditionally haven’t elected the same party to power for two terms in a row and hence anti-incumbency is a major player here than other States.

Both Modi and the Gandhi scion have been crisscrossing all the poll bound States, including Telangana, for hectic campaigns. Polls in MP and Mizoram will take place on November 28, while Assembly elections in Rajasthan and Telangana will be held on December 7.

Inspector General of Police (Raipur range) Dipanshu Kabra said a team of the Border Security Force (BSF) was out on an area domination operation in view of the polls on Monday when Naxals blew up the improvised explosive device (IED) in a forest in Kanker district, around 200 km from the State capital Raipur.

BSF sub-inspector Mahendra Singh was seriously injured in the blast and he succumbed to injuries while being taken to a hospital, said Kabra, who is the nodal officer for election-related security in the State. This is the fourth IED blast triggered by Naxals in Chhattisgarh in the last 15 days.

In another incident, a Maoist, clad in ‘uniform’ was gunned down in an encounter with security forces in Bijapur district, located around 450 km from here. The exchange of fire took place at a forest in Bedre area when a team of the Special Task Force (STF) was out on an anti-Naxal operation, a senior police official said. The body of the rebel and a rifle were recovered from the spot.