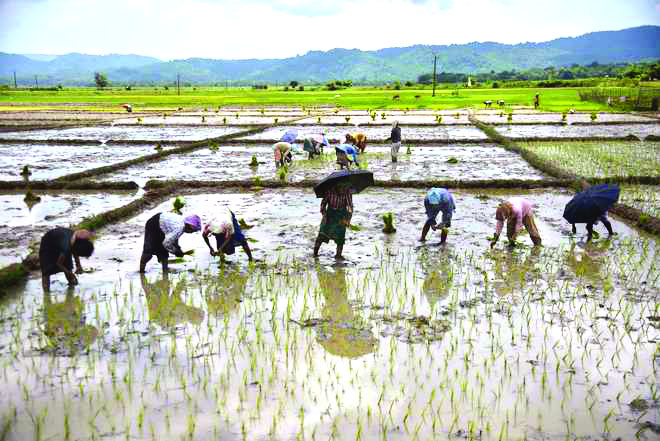 After farm loan waiver announced by newly-elected Congress Governments in Madhya Pradesh and Chhattisgarh, the BJP-led Governments of Assam and Gujarat too have decided to write off farm loans and electricity bills of rural users respectively.

The BJP-led Government in Gujarat announced it will waive electricity bills of connection holders in rural areas to the tune of Rs 650 crore.

The Assam Government approved Rs 600-crore farm loan waiver which it said will benefit around eight lakh farmers of the State. The decision was taken at a Cabinet meeting held on Monday night.

According to the Assam Government scheme, it will write off 25 per cent loan of farmers up to a maximum of Rs 25,000, State Government spokesperson and Parliamentary Affairs Minister Chandra Mohan Patowary said. The waiver will be for all the loans taken through Kisan Credit Card (KCC) and from PSU banks, he said.

The MP Government had declared to waive individual loan of up to Rs 2 lakh taken by farmers.

The Assam Government has also sanctioned an interest relief scheme which will enable around 19 lakh farmers to take loans at zero interest from the next financial year, said the Assam Parliamentary Affairs Minister.

“The debt relief scheme for farmers will waive 25 per cent of all loans taken till now. The benefit will be up to a maximum of Rs 25,000. This scheme will immediately benefit around eight lakh farmers,” he said.

Due to these schemes there will be an additional burden of Rs 600 crore on the State exchequer this fiscal. “For the next fiscal, we will have to do budgetary provision for the schemes,” Patowary said.

The Cabinet also approved subsidy up to Rs 10,000 to incentivise farmers if they take loan from KCC.

Meanwhile, the BJP-led Government in Gujarat announced on Tuesday it will waive electricity bills of connection holders in rural areas to the tune of Rs 650 crore.

“Total 6.22 lakh connection holders in rural areas across the State will be benefited with this waiver to the tune of Rs 650 crore pending electricity bills,” Gujarat’s Energy Minister Saurabh Patel said.

The Minister said these connections were cut off due to power theft and non-payment of bills. “These are domestic, agricultural as well as commercial connections,” Patel said.

The Congress and Patidar quota agitation leader Hardik Patel have been demanding loan waiver for farmers in Prime Minister Modi’s home State for some time now, cornering the Vijay Rupani-led Government in Gujarat.

The agrarian distress led to the BJP’s worse performance in over decades when it barely managed to win 99 seats in the 182-member Assembly in State elections last year.