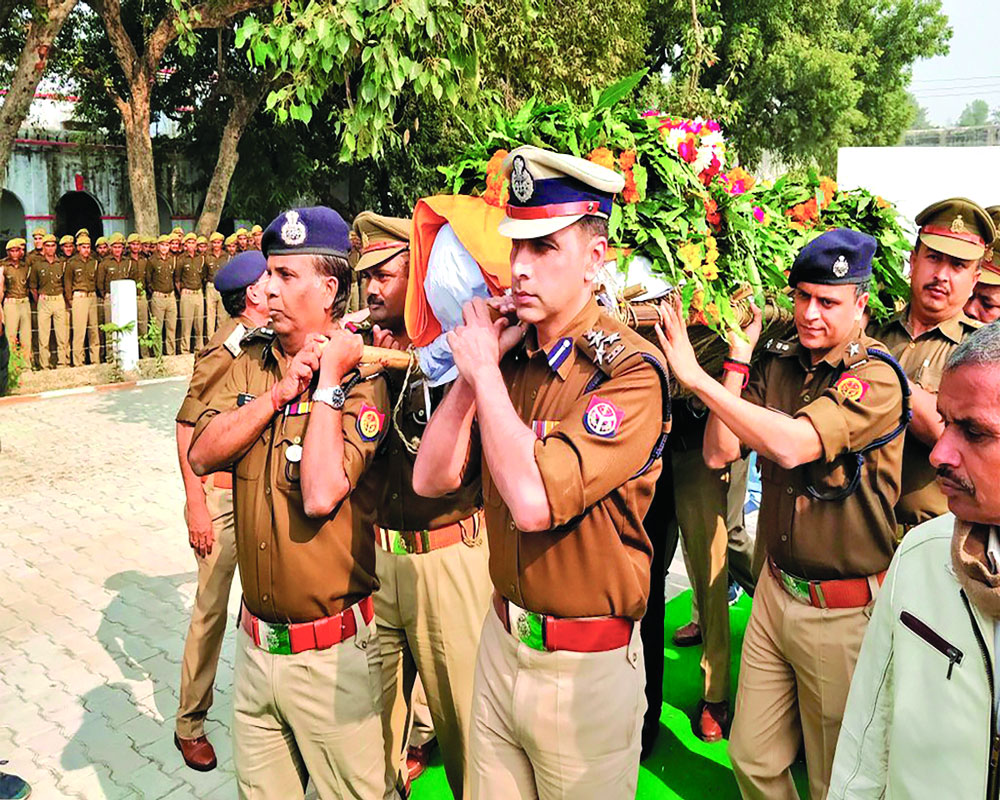 Bulandshahr Police has arrested four persons for the murder of Inspector Subodh Kumar Singh Rathor who was posted at Siana police station in the district.

Subodh was murdered by a mob of Bajrang Dal activists who were protesting the presence of a cow carcass in sugarcane field of Mahav village under the jurisdiction of Siana police station on Monday.

“It appears to be a cold-blooded murder as rioters had come fully armed with arms, iron rods, spears and wooden sticks and they specifically targeted Inspector Subodh,” a police officer said on the condition of anonymity. Circle Officer (CO) of Siana Satya Prakash Sharma escaped death as police force arrived on time and he was taken out to safety from a locked room.

Inspector Subodh could not escape as rioters attacked with deadly sharp weapons and did not allow the rescue team to take him to hospital. By the time he was taken to hospital, he had succumbed to bullet injuries in the head.

According to sources in Bulandshahr Police, it appears that those behind the murder of Inspector Subodh Kumar had come prepared to bump him off as they did not heed to the continuous assurance given by him to lodge an FIR after a carcass of cow was found hanging in a sugar field on Monday morning.

“Inspector Subodh Kumar, who had reached the spot immediately after getting the call, tried his best to assuage the irate crowd and he was joined by the Sub-Divisional Magistrate (SDM) of Siyana who kept on announcing via a loudhailer that exemplary action was being taken against those found guilty of killing coes. However, there were certain elements who were not in a mood to listen and they egged on the irate crowd to take revenge. Situation went out of hand and soon there was free of all as the police team led by Inspector Subodh Kumar was outnumbered. The mob, that was baying for his blood, targeted Inspector Subodh Kumar and snatched away his .32 bore licensed gun and three cellphones, including the one with the CUG number of the Uttar Pradesh Police. They shot in the head with his revolver. As other policemen tried to take him to hospital, the mob attacked them,” said police.

Police have named 27 persons in the FIR under various IPC Sections and Section 7 of the Criminal Amendment Act.

There was heavy deployment of security forces in the area and tension spiralled as angry families demanded justice for the deceased. Troopers of Provincial Armed Constabulary (PAC) and State Police are patrolling the area in riot gear to block entry of mischievous elements into the riot affected village.

Policemen had to run to their safety. The mob went on the rampage and caught hold of Satya Prakash Sharma and locked him in a room. The CO sent frantic SOS messages on the wireless. Soon force arrived and he was saved from the clutches of the marauding mob after policemen were able to break open the lock and rescue him safely,” stated Sub-Inspector Subhash Chand of the Siana police station in his written complaint. Chand had gone to the spot with Inspector Subodh Kumar and witnessed the gory incident.

Senior police officials of the Uttar Pradesh Police were camping in the area to supervise investigations and to restore normalcy.

Additional Director General of Police (Law & Order) Anand Kumar said, “Four persons identified as Chaman and Devendra of Naya Baans area, Ashish a resident of Bugrasi, and Satish Chauhan of Chandpur have been arrested in this connection after their identities were established on the basis of video footage”.

“Tension has subsided in Bulandshahr and efforts are on to ensure there is no trouble in future,” he said. Though both Singh and Sumit died of gunshot injuries, the inspector, who was posted at the Siana Police Station, also received injuries from hard and blunt objects, Kumar said.

A heavy police force, including five companies of Rapid Action Force (RAF) and six companies of PAC have been deployed in the village Chingraothi on Bulandshahr Siana road where carcasses of cows were unloaded from the tractor trolley. In the incident a villager Sumit was also injured who was rushed to Meerut for better treatment but he succumbed to his injuries in the hospital.

In the meantime ADG Intelligence SB Siradkar has reached Bulandshahr. The UP Government has asked him to submit his report within 48 hours. In addition to the FIRs and the seeking of report within 48 hours, a Special Investigation Team (SIT) has been constituted which will investigate under what circumstances the violence sparked and why the inspector was left alone by the colleagues.