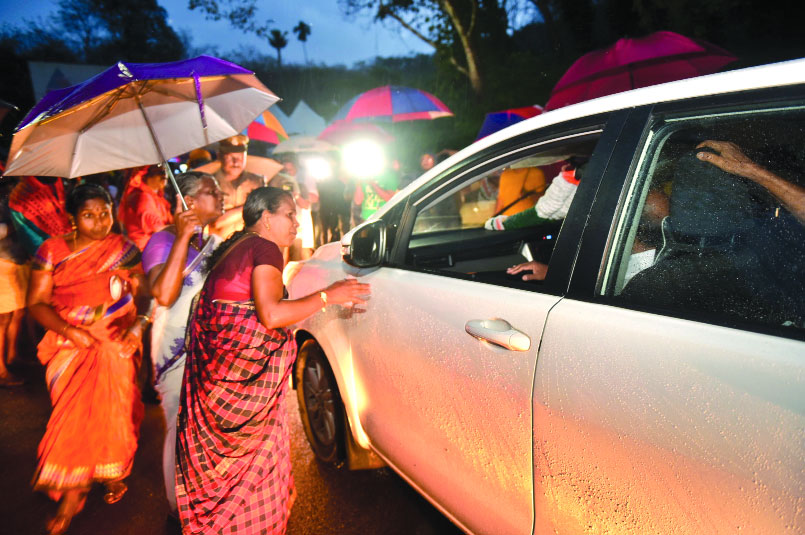 Kerala has geared up for massive unrest on Wednesday over the implementation of the Supreme Court order allowing women of all age groups to enter the Sabarimala temple. With thousands of men and women devotees of Lord Ayyappa opposed to entry of women of menstrual age into the temple and threatening to commit mass suicide, the State administration faces a serious challenge in maintaining law and order situation.

Wednesday is the first day when the SC order will come into force.

The Travancore Devaswom Board (TDB), which manages the temple, held a meeting to find a way to defuse the situation, but Pandalam royal family and other stakeholders walked out  over the TDB’s reluctance to discuss the issue of filing a review petition against the apex court order.

While Chief Minister Pinarayi Vijayan has asserted his Government will implement the SC order, police face an uphill task as hundreds of women devotees of Lord Ayyappa, the eternally celibate deity of Sabarimala, picketed the road to the hill shrine and prevented women they suspected were of menstrual age from proceeding to the shrine some 20 km away.

Lustily chanting “Swamiya Saranam Ayyappa” hailing the Lord, the devotees checked buses and private vehicles for girls and women of the “banned” age group and forced them to abandon their journey.

Television channels showed some college students, including young girls wearing black dresses, being ordered to get down a bus.

Chief Minister Pinarayi Vijayan issued a stern warning to those who dared block devotees from entering the temple.

“We will ensure security to all. Nobody will be allowed to take law into their hands.

My Government will not allow any violence in the name of Sabarimala,” he told reporters in Thiruvananthapuram as followers of Lord Ayyappa virtually besieged Nilackal, about 225 km from the State capital.

“Stern action will be taken against anyone who prevents devotees from going to Sabarimala,” he warned, and ruled out any rethink of his Government’s decision against seeking a review of the Supreme Court order. “We will go by what the Supreme Court says,” he asserted.

The TDB, meanwhile, went into a huddle with stakeholders, including the Pandalam royal family representatives and priests, to soothe frayed tempers amid escalating protests by the Hindu right and common Ayyappa devotees. There was, however, no breakthrough.

The meeting also attended by Ayyappa Seva Samajam and Yoga Kshema Sabha ended in a deadlock as the TDB stuck to its stand of not filing a review petition.

“It is very painful and we cannot agree. We wanted a decision on filing the review petition to be taken today itself, but the board said it can be discussed only at the next meeting of TDB on October 19,” Shashikumar Varma, a member of the Pandalam royal family said.

“We all wish that Sabarimala should not be made a war zone,” Varma,  the president of Pandalam Royal Palace Trust, told journalists after walking out of the meeting in a huff.

TDB president A Padmakumar, however, dismissed suggestions that the meeting was a “failure”. “What they (stakeholders) wanted was to file the review petition now itself. But the Supreme Court is closed till October 22. They also wanted to maintain the status quo on the customs and traditions.

“As the Supreme Court has passed a verdict, what can the board do? But the board will continue to talk with them to resolve the issue,” Padmakumar said.

He said the October 19 meeting will take up the issue of the review petition. Kerala has witnessed a series of protests and prayer marches over the last few days over the Government’s decision to enforce the Supreme Court order.

The Shiv Sena recently warned of “mass suicides” if women of menstrual age were allowed into the temple. Some other organisations have said women and girls aged between 10 and 50 years will have to tread on them before entering the temple.

Actor-turned-BJP politician Kollam Thulashi went to the extent of saying women of “banned age” visiting the shrine should be “ripped apart”.