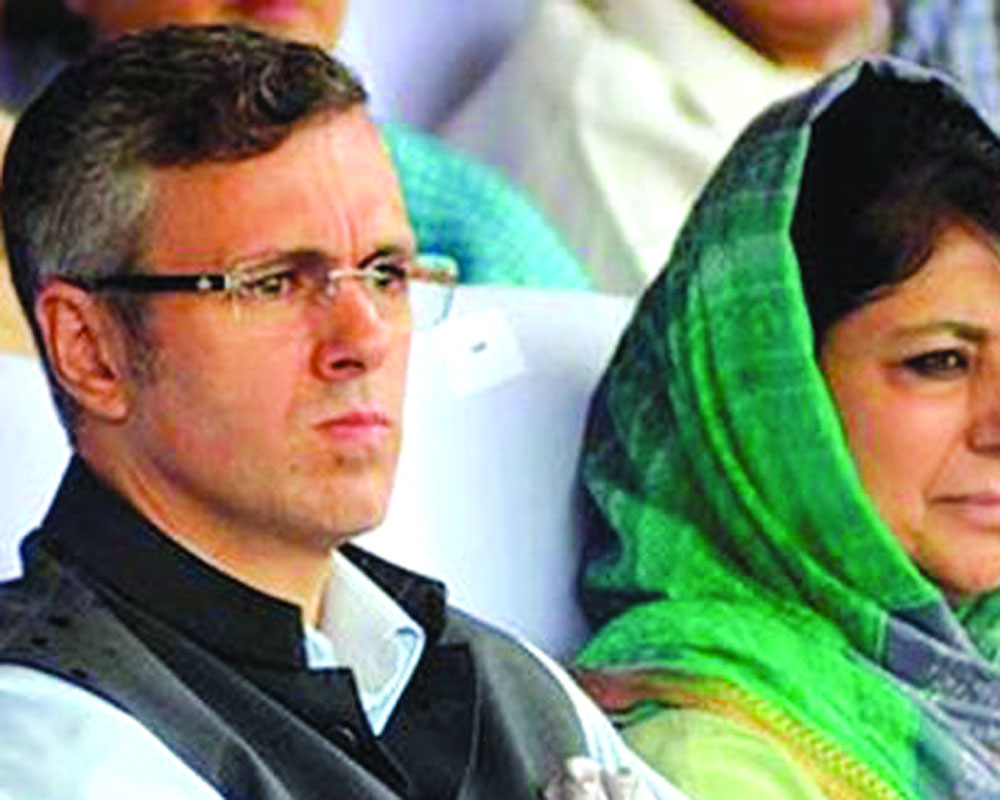 In a controversial move, Jammu & Kashmir Governor Satya Pal Malik on Wednesday dissolved the Assembly and torpedoed the attempt by the People’s Democratic Party (PDP), the National Conference (NC), and the Congress to form a coalition Government.

The order for dissolution of Assembly came hours after former Chief Minister Mehbooba Mufti, in her capacity as the president of single largest party with 29 legislators, wrote to Malik to convey that her party would stake claim for the Government formation with the support of the NC and the Congress.

In a separate letter to the Governor, Sajjad Gani Lone of People’s Conference (PC) too staked claim to form a Government. Lone, whose PC has two legislators in the Assembly, claimed that he has the support of 26 BJP legislators and 18 others, referring to possible dissenters of the PDP.

“The Governor, Jammu & Kashmir, Satya Pal Malik, has passed an order in exercise of the powers conferred upon him by Clause (b) of sub-section (2) of Section 53 of the Constitution of Jammu & Kashmir dissolving the Legislative Assembly,” Governor’s Principal Secretary Umang Narula said in an order.

Soon after the dissolution of the Assembly, Mehbooba said, “Oddly enough our pleas fell on deaf ears. But who would have thought that the very idea of a grand coalition would give such jitters.”

Mehbooba earlier took to her twitter handle saying, “Have been trying to send this letter to Raj Bhavan. Strangely the fax is not received. Tried to contact HE Governor on phone. Not available. Hope you see it @jandkgovernor.”

The dissolution of the Assembly culminated the political drama that unfolded on Wednesday afternoon after news broke that the PDP would be embracing its arch-rival NC to form a coalition Government to keep the BJP at bay and safeguard the special status of the embattled State.

The surprising developments began unfolding on Wednesday morning when Congress leader Gulam Nabi Azad confirmed in New Delhi that talks on Government formation were going on among the NC, the PDP and the Congress. Senior PDP leader and former Finance Minister Altaf Bukhari told reporters in Srinagar that around 60 legislators were supporting their move and negotiations were on to give a proper shape to the Government formation.

Bukhari said the alliance has been formed to protect the special status of Jammu & Kashmir, Article 370 and Article 35A. “We have to keep communal forces at bay. To Keep the BJP away, we are coming together to form a Government. An alliance has been made with over 60 MLAs together of the Congress the PDP and the NC to protect our special identity. I have no details about the contours of the alliance but it is to protect the special status, 370 and 35A,” he added.

Mehbooba wrote to the Governor, “Since I am presently in Srinagar, it would not be possible for me to call on you immediately and this is to keep you informed that we would be seeking your convenience shortly to stake the claim for forming a Government.”

The State is under Governor’s rule since June 19, a day after Mehbooba-led coalition Government was sacked following the withdrawal of support from the BJP. The Governor’s rule is competing its six months on December 19, which would have necessitate implementation of President rule.

Governor Malik had already hinted that he would not allow any Government formation in the State through “backdoor dealings” and also hinted at conduct of Assembly elections. However, last week he had indicated State Assembly, which was under suspended animation, would not be dissolved.

J&K Congress chief Ghulam Ahmed Mir said that his party would support the secular forces to form a Government. “We are ready to support secular forces. The formal meeting will take place soon regarding the formation of a Government in the State as all the three parties are reaching a consensus,” Mir said.

“All secular parties have come together for the bigger interest of State and public. For saving Constitution, may it be Article 370 and 35A, we have to rise above party lines especially when eminent dangers are bigger,” he said.

The formation of “grand alliance” of the PDP-NC-Congress took the formal shape a day after senior PDP leader and Lok Sabha member from north Kashmir Muzaffar Hussian Beigh hinted at formation of a “third front” comprising the BJP, Lone’s PC and PDP’s rebel legislators. Even as Beigh did not announce quitting the PDP, he openly criticised several decisions of the party, including the decision to boycott the municipal and panchayat polls in the State.

Beigh is one of the founding leaders of the PDP who briefly headed the party and rose in ranks to the level of becoming Deputy Chief Minister of the State in 2006.

Observers say that after the dissolution of the Assembly, the State politics would take a dramatic turn and new permutations and combinations would emerge.

Earlier, former BJP leader and Deputy Chief Minister Kavinder Gupta stirred major row by alleging that the PDP, the NC and the Congress were coming together “on the directions from Pakistan”.

“They boycotted municipal/panchayat polls on the directions of Pakistan and now they are coming together to form a Government in the State on their directions too,” Gupta told reporters in Jammu.

In the past these Kashmir-based parties have treated Jammu as “second grade” entity and now we will not allow them to take people of Jammu region for a ride, he added.

This decision of forming a Government, he alleged, was taken in a meeting held in Dubai.