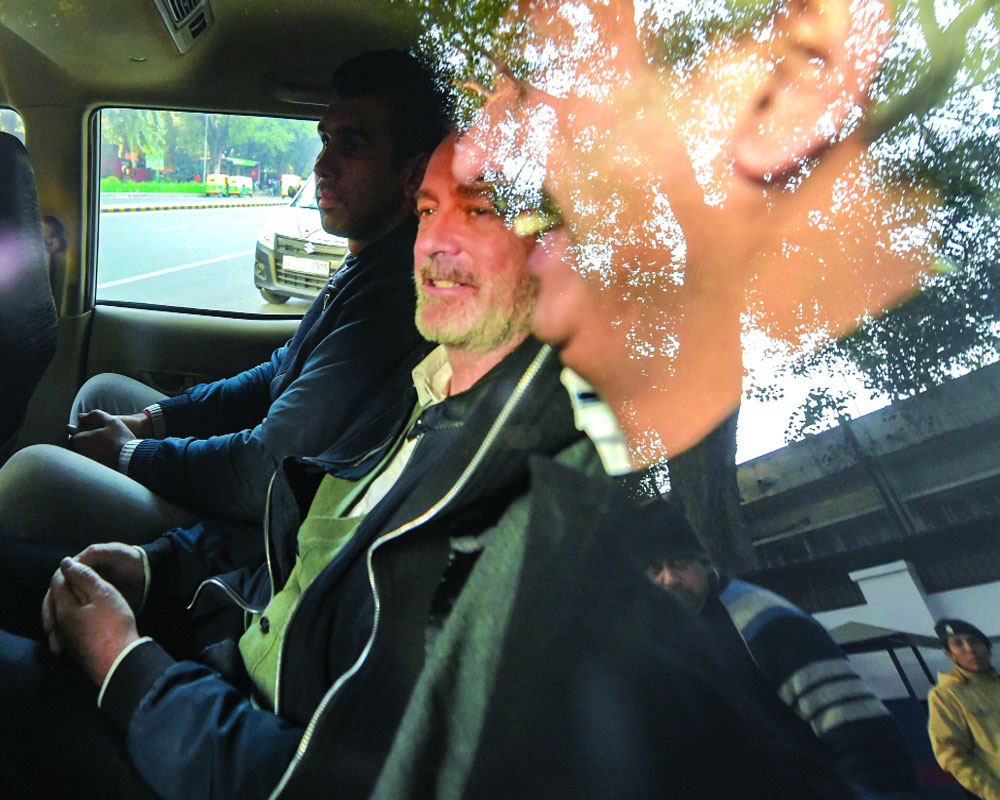 The VVIP chopper scam probe took a serious turn on Saturday as the Enforcement Directorate told a special court that the European middleman and accused in the case Christian Michel has taken the name of “Mrs Gandhi” and referred about “the son of Italian lady” who is going to be the “next Prime Minister of India” besides a “big man” and “R”.

In its application seeking seven-day extension of Michel’s remand, the ED further told the court the European middleman is also trying to misuse the liberty of legal assistance during his interrogation by passing chits to his lawyers asking how to tackle questions on Congress leader Sonia Gandhi. The probe agency, however, said it is yet to ascertain in what reference Michel took “Mrs Gandhi’s” name. After the agency’s submissions, the court granted the extension and imposed restrictions on Michel meeting his lawyers during ED custody.

The agency had sought that Michel be barred from meeting his lawyers during his custody, alleging that he was being tutored from outside through his lawyers.

The ED told the court that Michel had made a reference to “Mrs Gandhi” during interrogation on December 27. During medical examination, the accused had handed over a folded paper to his advocate Aljo K Joseph and it was noticed by ED officials. After perusal of the paper, it was revealed that it pertained to a set of follow-up questions on “Mrs Gandhi”.

The ED told the court that it is clear that there is a conspiracy to shield or to tamper with the evidence that could be brought forth from the questioning of the accused. “The benefit given by the court to the accused of legal access is being misused. It should be stopped henceforth,” the agency contended.

The court directed that the three defence counsels will be able to meet Michel one at a time at a distance from the accused and legal assistance will be only for 15 minutes at 10 am and at 5 pm during a day. The direction came after Michel was produced before vacation judge Chandrashekhar.

Michel’s custody was required for “unearthing the deep-rooted conspiracy and identification of all his accomplices, including the IAF officials, MoD (Ministry of Defence) officials, bureaucrats and politicians who gained undue advantage for getting the contract in favour of AgustaWestland,” the ED said in the remand application.

The accused is trying to introduce new alibis to save himself and his aides who have received/facilitated in laundering of proceeds, it said.

Michel, who was extradited from Dubai recently, was arrested by the Enforcement Directorate on December 22 and sent to seven days’ custody of the agency over money laundering charges in the scam after he was produced in a court here. He was earlier lodged in Tihar Jail in the related CBI case.

The CBI has alleged that Michel was paid a huge bribe amount by AgustaWestland which was given to the officers of Indian Air Force, MoD, bureaucrats, politicians and a family in India for showing favour in VVIP Helicopter deal.

The CBI had alleged that an amount of euro 42.27 million was paid by Westland Group companies to the firms of accused as kickbacks.

Michel is among the three alleged middlemen being probed in the case by the ED and the CBI. The others are Guido Haschke and Carlo Gerosa.

The ED, in its chargesheet filed against Michel in June 2016, had alleged that he received Euro 30 million  - about Rs 225 crore - from AgustaWestland. The deal was subsequently scrapped by the UPA Government following allegations of corruptions in the case.