No clean chit to Verma; SC seeks reply in 3 days

No clean chit to Verma; SC seeks reply in 3 days 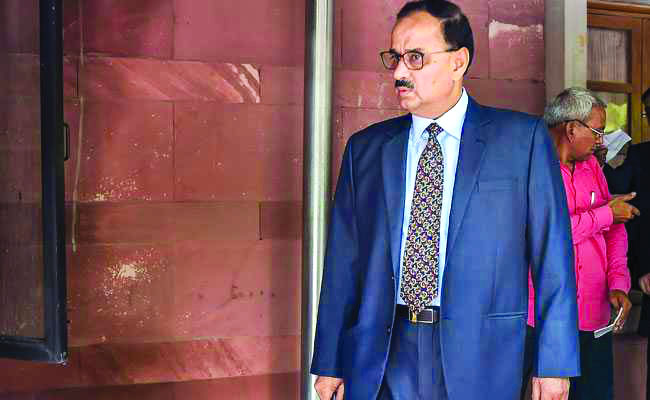 The Central Vigilance Commission (CVC) has come out with “mixed” findings while dealing with allegation of corruption against benched CBI Director Alok Verma. Taking note of the CVC report, the Supreme Court has given Verma time till November 19 to respond to certain “very uncomplimentary findings” in the CVC report.

The SC Bench headed by Chief Justice Ranjan Gogoi said there are some “very complimentary”, some “not so complimentary” and some “very uncomplimentary” findings in the “exhaustive” preliminary enquiry report. The Bench included justices SK Kaul and KM Joseph.

The SC also directed that a copy of the CVC report along with annexure be given to Verma in a sealed cover and it “will be open for” him to file his response to it “again in sealed cover” by 1 pm on November 19. The apex court has fixed November 30 as the next date for hearing in the matter.

Earlier, Verma had approached the apex court challenging the Centre’s decision to divest him of his duties and sending him on leave following his feud with his deputy Special Director Rakesh Asthana, who has levelled corruption allegations against him. Asthana was also divested of his duties and sent on leave.

The CVC’s enquiry against Verma was conducted under the supervision of former apex court judge Justice AK Patnaik and the report was filed in the court on November 12 following a directive from the top court.

During the hearing on Friday, the Bench made it clear that the confidentiality of CVC’s report was necessary “keeping in mind the need to preserve and maintain the sanctity of the institution of the CBI and public confidence in the said institution”.

The Bench had noted that a copy of the report and the annexure be also furnished in a sealed cover to the offices of Attorney General KK Venugopal and Solicitor General Tushar Mehta, who is representing the CVC.

The court turned down the plea of senior advocate Mukul Rohatgi, appearing for Asthana, to also give him a copy of the CVC report.

“At this stage, we are not inclined to call upon either the Union of India or any other party to submit any response/reply to the said report of the CVC and the only response the court is permitting is that of the petitioner — Alok Kumar Verma...”.

Rohatgi said Asthana has been facing a criminal case for complaining against Verma and demanded the report, saying it was Asthana who had filed a complaint against the CBI Director to the Cabinet Secretary, which was subsequently sent to the CVC.

“This is not a case of security of the nation. Why should this report be kept in a sealed cover?” Rohatgi said.

When Rohatgi said, “That (complaint) I can file”, the Bench observed, “Anybody can file a complaint”.

Senior advocate Fali S Nariman, appearing for Verma, told the court that the CBI Director would file his response to CVC report as soon as possible by November 19 as “the earlier it (issue) is resolved, the better it is”.

To this, the Bench told Nariman, “Once we will have your (Verma) response, we will take a decision”.

The Bench told senior lawyer Dushyant Dave, appearing for NGO Common Cause which has filed a separate plea seeking a probe by a special investigation team against CBI officers, that the NGO has not filed a list of policy decisions taken by acting CBI director M Nageswara Rao.

Dave had earlier claimed that despite court’s order that Rao would not take policy decisions, the acting CBI Director has taken several such decisions.

When Dave said he would file the list of decisions taken by Rao, the court observed that “it will be open for any party to supplement the said list” and the issue would be considered on the next date of hearing.

The Bench also dealt with the application filed by Congress leader Mallikarjun Kharge and CBI DSP AK Bassi, who has been transferred to Port Blair and said that they would also be considered on November 20.

On November 4, Kharge had moved the top court contending that divesting Verma of his statutory powers and functions is “completely illegal and arbitrary”.