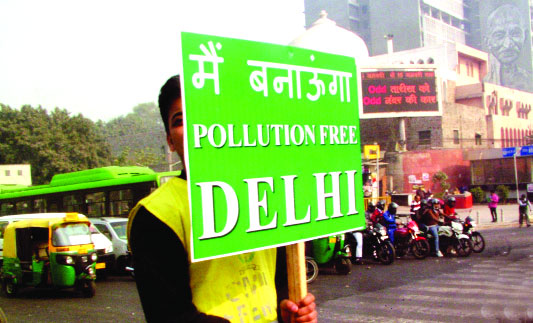 After pollution level in the national Capital reached severe level for the fourth consecutive day, Delhi Chief Minister Arvind Kejriwal said on Tuesday the Delhi Government will implement odd-even scheme to regulate plying of private vehicles in the city, whenever it is required.

He said the Delhi Government was taking several steps for reducing pollution levels in the Capital. In view of the city’s ‘severe’ air quality, the Supreme Court-appointed Environment Pollution Control Authority (EPCA) on Monday banned industrial activities in pollution hot spots and construction work across Delhi-NCR till Wednesday.

“Whenever the odd-even (scheme) is required, we will definitely implement it,” Kejriwal told reporters here.

“We all have to play active role in reducing pollution. The Delhi Government is taking several steps. We have carried out large-scale tree plantation drive. The Government will procure 3,000 buses soon. We are making all efforts on our part,” Kejriwal said.

Asked about the Centre’s role in reducing pollution levels, the CM said the Union Government should call a meeting of neighbouring States as “air has no boundary”.

“In October and November, there are around 20-25 days when pollution level increases in Delhi due to stubble burning (in neighbouring States). Until the Centre takes steps, nothing cannot be done,” Kejriwal said.

The city is facing its worst pollution crisis since Diwali. While the Central Pollution Control Board (CPCB) data showed the overall air quality index (AQI) at ‘severe’ level of 416, the Centre-run System of Air Quality and Weather Forecasting (SAFAR) recorded an AQI of 423. Authorities have advised people to minimise outdoor activities and avoid use of private vehicles.

The odd-even scheme which is a part of the Graded Response Action Plan (GRAP), as measures to combat air pollution, was first introduced in the city in 2016 between January 1-15 and April 15-30. Under the scheme, vehicles with odd and even number licence plates were allowed to ply on alternate days.