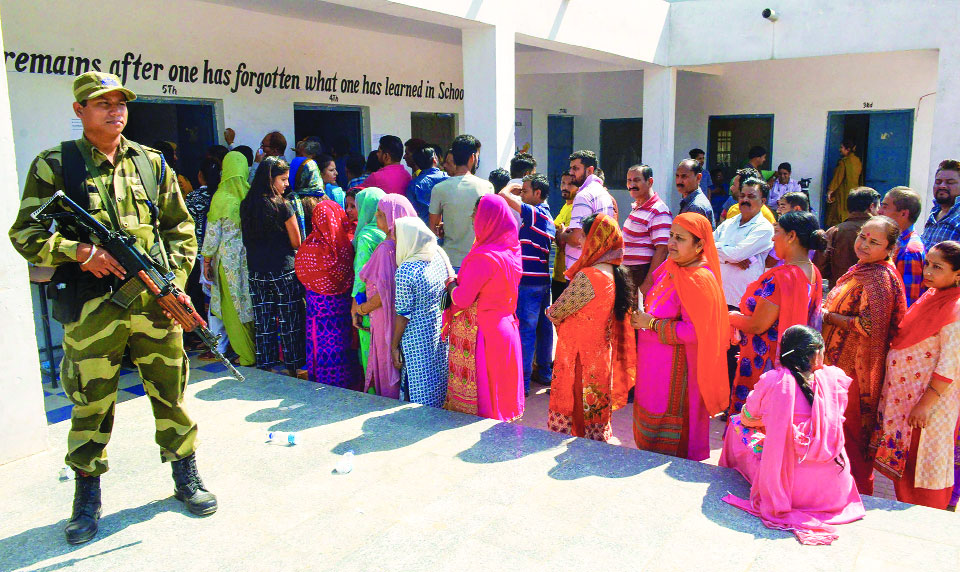 Defying poll boycott call by Kashmir-based mainstream political parties and separatists as well as terrorist outfits, more than 56 per cent electorate cast their votes under tight security arrangements in the first phase of municipal polls in Jammu & Kashmir on Monday. Barring a few incidents of violence, including a stone-pelting attack on a BJP worker in Bandipora, the polling passed off peacefully.

J&K’s Chief Electoral Officer (CEO) Shaleen Kabra said the overall polling percentage across the State was recorded at 56.7 per cent. The election office did not give separate break-up of the poll percentage in Kashmir valley. Independent sources said that 8.3 turnout was recorded in Kashmir valley as 7,075 voters exercised their franchise out of 84,692 eligible voters.

For the first time EVMs were used in the municipal polls in the State. Jammu Deputy Commissioner said the experiment worked well as only five EVMs reported some minor technical snags and were immediately replaced to ensure smooth polling.

While most parts of Srinagar observed complete shutdown during polling.  Jammu wore a festive look in and around polling stations with healthy participation of voters from all walks of life.

A large number of senior citizens stepped out of their homes and participated in the polls at the grass-roots level. First-time voters, especially young girls, waited patiently outside polling booths to cast their votes.

The polling percentage touched 80 per cent in frontier Rajouri district, while over 75 per cent polling was reported in Poonch. Over 2.47 lakh voters across 75 wards of Jammu Municipal Corporation took part in the polls.

Thousands of voters across border areas of RS Pura, Bisnah, Arnia, Akhnoor, Jourian, Khour also came out in large numbers to elect their representatives in the municipal committees.

The outcome of these polls in Jammu division is set to change the course of State politics in the coming months.

The State unit of the BJP is testing its waters after snapping ties with the Peoples Democratic party (PDP). In majority of 75 wards, the BJP faced tough competition from a large number of rebel BJP candidates. Due to absence of the National Conference and the PDP from the poll process, several independent candidates supported by heavy weight leaders of these parties are set to give a tough fight to the BJP candidates.

Clashes broke out in Machwa and Bagh-e-Mehtab pockets in Srinagar’s uptown periphery when voting was going on in the area.

Officials said that the situation was brought under control after minor clashes in the area. A woman was injured in violent protests in north Kashmir’s Lankareshpora and Plan pockets of Bandipora when clashes broke out between security forces and anti-poll protesters.  Sources said the woman was injured with pellets.

“Let National Conference and PDP boycott for another 25 years the way we did it (earlier),” he added.

The poll was conducted amid a near-total shutdown across the Valley called by Joint Resistance Leadership (JRL) comprising Syed Ali Shah Geelani, Mirwaiz Umar Farooq and Yasin Malik. While Yasin Malik has been taken into custody, Mirwaiz and Geelani have been kept under house detention. In a statement JRL leaders “appreciated people’s rejection and boycott of the sham ULB elections”.

“This election has violated the very definition of the democratic process, making a mockery of it as the identity of the contesting public representatives is neither known to the public nor the area going to polls! Secrecy manipulation and bribery are the hallmark of this twisted exercise,” the JRL said adding the people dismissiveness of this farcical exercise which in reality is a military operation to legitimise Government of India’s forcible control, shows people’s unwavering commitment to their struggle for self-determination and their political maturity.

According to official sources a total number 1204 candidates were in the fray across 321 wards, comprising of 83 in Kashmir division and 238 in Jammu division. Polling took place across 820 polling booths, 150 in Kashmir and 670 in Jammu. Out of these 138 polling stations in Kashmir were categorised as hypersensitive while 52 stations belonged to the same category in Jammu division.