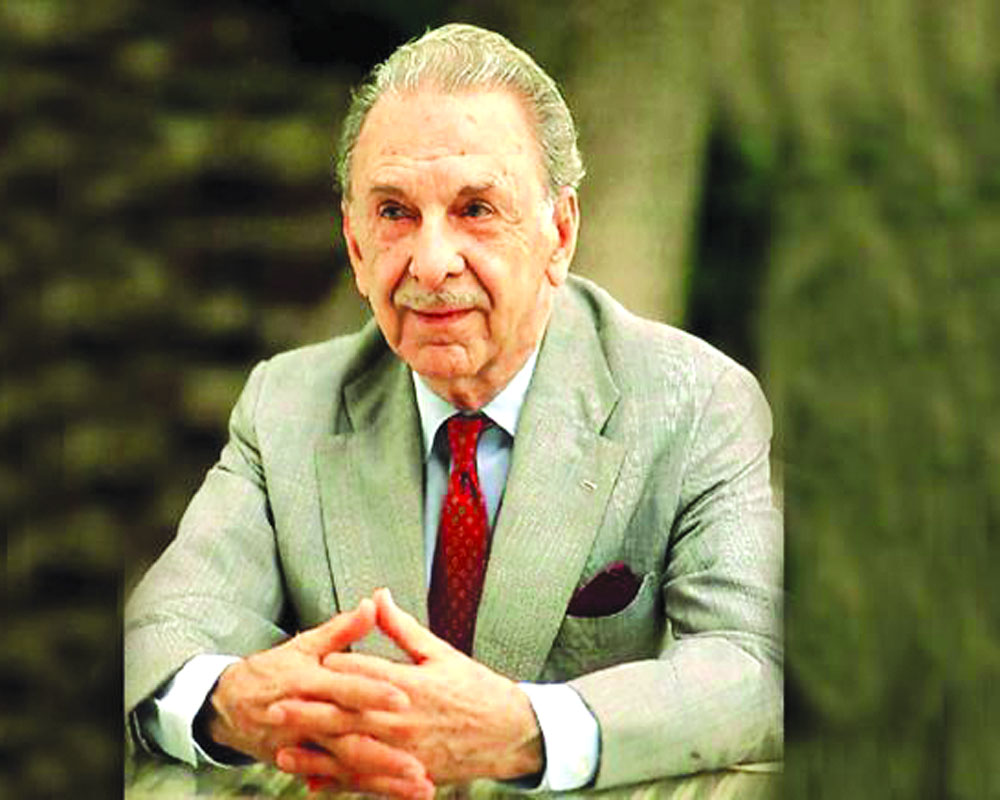 Twenty five years after his demise, a work detailing the visionary zeal and far-sighted leadership qualities of JRD Tata, the former chief of the Tata Group, will hit book shelves on Friday.

It was on November 29, 1993, JRD Tata, Jeh to friends and close associates, breathed his last at the age of 89. He is the one who should be described as a legend. It may sound sad, but the work is also an elegy to Air India, the airline launched, nurtured and took care of by JRD.

The Tata Group: From Torchbearers to Trailblazers is an account by Shashank Shah, fellow and project director at Harvard University’s South Asia Institute. Shah has narrated how the Tata Group emerged as India’s largest and most globalised business conglomerate known for its products ranging from salt, software, cars, communications, housing, hospitality, steel and gold with over 100 companies offering products and services across 150 countries and 7,00,000 employees contributing a revenue of US$ 100 billion. But what makes the volume unique is his description of how the policy makers goofed up the opportunities offered by the Tatas, especially JRD, to make India the numero uno in global aviation industry.

JRD, who was the first Indian to acquire a commercial pilot licence in the country, had a passion for flying and he launched the Tata Airlines in April 1932. The company excelled in the market with profits shooting up from Rs 66,000 to Rs 6 lakh in five years. The Tata Sons established Air India International in October 1947 for iternational air service to London. On June 8, 1948, Malabar Princess, a 40-seater Lockheed Constellation aircraft purchased by Air India International took off from Mumbai to London marking India’s arrival in the global aviation map.

“Over the years, Air India developed a fine reputation for its high-class on-board service that was talked about with admiration and envy by its global competitiors. In the 1950s, when British Airways introduced a jet service that cut a few hours off the trip, passengers still preferred to fly by Air India’s slower propeller-driven aircraft, simply because of the way they were pampered on-board. Air India’s finest service probably was on its transatlantic flights, where it took great pleasure in stealing passengers away from its American and European competitors. Long before Singapore Airlines created an icon of its ‘Singapore girl’ in her silk saronh-kebaya, Air India had made an icon of its air-hostesses in their exotic silk saris,” writes Shah.

The passing of the Air Corporation Act 1953 by the Nehru-led Congress Government sounded the death knell of India’s aviation industry. All existing airlines including Air India International were nationalised because of the socialist bug and also due to some other reasons. The Government pleaded with JRD to accept the chairmanship of Air India and he accepted the post purely on an honorary basis. The next 25 years saw Air India emerging as the benchmark in aviation sector and Shah has listed in detail how JRD worked overtime to ensure that the airline he launched stay on top of the global aviation market.

In the 1970s, when the Government of Singapore commenced Singapore Airlines to attract global tourists into the little island nation, it chose to collaborate with Air India for learning world-class service standards. The doyen of Indian aviation industry was fired by then Prime Minister Morarji Desai following the air-crash involving Air India’s first Boeing 747 which plunged into the sea off the Bombay coast on January 1, 1978. Though pilot’s error was the cause of the crash, the incident resulted in the unceremonious ouster of JRD from the chairmanship of Air India. “Unpaid Air India Chief Is sacked by Desai”, read the headlines of Daily Telegraph on February 27, 1978.

As part of the Open Skies Policy of the then Prime Minister PV Narasimha Rao, the Government of India had asked JRD and Ratan Tata, the new chairman of the Tata Group whether they would be interested in staring a new domestic airline. Though the Tatas submitted a detailed proposal, it never got the approval of the powers that be for reasons known only to the latters. Though JRD had passed away by this time, Ratan Tata, an avid aviator was there to lead the company from the front.

The Tatas had formed a joint venture with Singapore International Airlines but neither the Foreign Investment Promotion Board not the Ministry of Civil Aviation were willing to allow the company to take off. In one of the crucial meetings, Yogesh Chandram the then Civil Aviation Secretary questioned the Tatas’ capacity to invest large amounts of capital and stomach losses in the uncertain airline business. “It was ironical that such an observation was made for a business house that had started, developed and succeeded in capital-intensive industries for over nine decades. Ratan Tata assured the Ministry that the Tatas were not looking for any Government subsidies. During the presentation that ensued, Chandra abruptly got up and left, sending a suspicious signal. The indirect indication was that the Tata Airline proposal may be rejected,” writes Shah.

While poultry farmers, makers of windmills, chit-fund owners were bestowed with licences, Tatas, the pioneers of India’s civil aviation business were denied permission citing one reason or other. The year 2018 happens to be the 150th anniversary of the Tata Group. The Trailblazers is the history of India missing the development buses, not once but many times as a result of crony capitalism and the virus by name socialism.