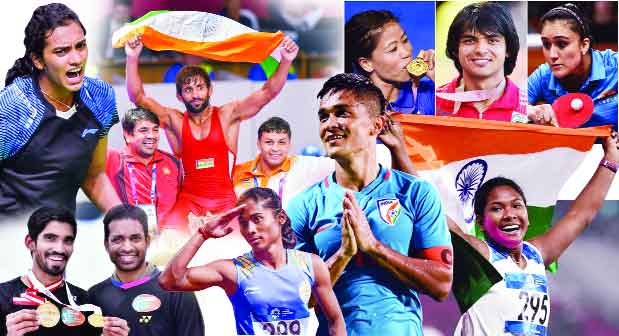 i remember I did not have enough money to purchase gloves for boxing and had to save from my pocket money to buy gloves worth Rs 350. The conditions were really tough and had to wear torn shoes during my national championships. But that has taught me that obstacles will always be there, but you have to think like nothing can stop you in life. And then nothing can stop you from achieving your dream.

India’s story is full of struggling athletes from remote corners of India, of dismal infrastructure, of bias against sports, of slim money, bad nutrition and disparate training facilities. The cricket versus rest of the sports has been a raging debate over the decades but this is also a fact that despite all these odds, Indian athletes have given their best and even brought in the gold and silverware for the nation from various global sporting events. That’s because undeterred passion and devotion pays dividends.

When I first started boxing, my parents did not know and I had to hide and go for practice secretly. My parents thought that boxing is a boy’s game. But I was always a very adamant kid and I wanted to play the sport and did everything that was possible to keep playing it. While there was no one to support or encourage me back then, through my academy my vision is to take boxing to every corner of the state; promote and encourage youngsters and give the right guidance, which I lacked thoroughly until recently.

This year was good but I am entirely focused on the 2020 Tokyo Olympics.  That may prove to be a tall task for the average athlete, especially at my age of 35 which is widely considered old and over the hill for a physically demanding sport like boxing. But I don't let mundane details distract me from my goal. I am determined to overcome the problem of advancing age just as like I overcame all other obstacles that have come my way since childhood. My real strength is my will power. An athlete needs to be mentally strong. This is more so in my case as I have had to prove myself to people right from the beginning.

I have had to face a lot of obstacles. First of all I am a girl, and as a result, I had to fight initial disapproval from my family and society in general when I took up boxing. Then I got married which meant I had to adjust my schedule and lifestyle. Then I became a mother which meant more adjustment.

Now I am fighting against age. At my age, it is a challenge to maintain fitness and compete against younger opponents. Now I have grown old for this sport. I have achieved a lot in my career. I have nothing left to prove. But I will keep on competing as long as my passion is alive. I want to wear the India jersey and contribute towards my country. I want to win medals for the country.

Now that India has won medals at the AIBA World Championships, I am confident that changing social attitudes will see the country achieving even more glory in women's boxing in future.

Social attitudes towards woman participation in sports are changing slowly. Earlier, girls from the north, especially Haryana and even those from the south, used to face a lot problems from their families while taking up boxing. This is true even now to some extent. But attitudes have changed. People should let their daughters play sports. Only then we will win medals at the Olympics.

What has taken me ahead is determination and strong will to continue attaining medals and glory for my country. I don't motivate myself by saying I can, I always ask myself why can't I. I keep that in my mind. I never skip my practice sessions. It doesn't matter wherever I go but if I do miss my trainings I compensate it with my evening sessions.

Quite a phenomenon this diminutive Dhing Express from Assam! Hima Das, the daughter of a poor rice farmer from a village in Nagaon district, worked relentlessly to bring in the white glitter of glory despite no facilities, coaching, infrastructure and money or resources. She trained in her father's rice field. Das broke the national record twice at the Asian Games, clinching a silver medal in the 400m. She was conferred with the Arjuna Award and is currently India's youth ambassador for the UNICEF. Yet she is humble and says she is now working hard to make news in the Tokyo Olympics in 2020.

Setting a national record of 88.06 meters, this world-class javelin thrower hit Gold in the Asian Games, the second after a Commonwealth Games yellow medal. As a junior in 2016, he threw for 86.48m to break the junior world record at the IAAF World U-20 Championships.

Olympic silver medallist PV Sindhu made history by becoming the first Indian to win the season-ending BWF World Tour Finals in Guangzhou. She also won gold in the mixed team event and a silver medal in the women's singles event during the Commonwealth Games. The historic silver medal in the Asian Games was another feather in the nation's cap.

Ace shuttler Kidambi Srikanth established his own halo in April this year when he become World Number 1 in badminton long after Prakash Padukone  was considered World No 1 when he won three cup tournaments in 1980. Gold in Commonwealth Games mixed team event and a silver in the singles event despite it being a touch year with injuries was no mean achievement.

The burly Tajinderpal Singh Toor all the way from Moga in Punjab, broke the Asian Games record in the shot-put event, throwing 20.75 in his fifth attempt, that when his farmer father tragically lost his battle against bone cancer just a few days later. If it wasn't for his father, Tajinder might not have taken to shot put as he aspired to be a cricketer.

This Manipur weightlifter standing tall at a petite 4'11, lit up the stage with her fantastic performance which broke the women's 48-kg category CWG record. She lifted all of 196 kg in total - 86 kg in snatch and 110 kg in the clean and jerk.

Despite a swollen and painful jaw, an excruciating toothache and sore feet due to ill fitting shoes pinching her 12-toes feet, 21-year-old Swapna Barman created history this year by becoming the first Indian to clinch a Gold medal in the Heptathlon category at the Asian Games 2018. She almost returned with her ill health and pinching shoes but finally tided over the gruelling schedule of seven events, spread out over three days by notching 6,026 points, becoming the fifth woman athlete to score 6,000 points in the sport.

Magnificent Mary is a story of medals in a rarified sport of woman boxing. She has carried on relentlessly, aiming to cap an Olympic Gold now that her weight category of 48 kg has been included in the Big Games for the first time. She is a fable of struggles & achievements inspiring thousands of under-privileged athletes to fight the odds & bring in glory. Incredible athlete! Rajya Sabha member! Mother to three! Mary indeed is a magnificent example.

On June 2, India’s best football player and captain, issued a heartfelt plea on social media urging fans to come out and support the team. The move paid off. After a turnout of less than 2,000 in the previous match, the official attendance rose to 8,890 in the next in Mumbai. Things couldn't have gone better for Chhetri on his 100th appearance, as he led India to a 3-0 victory against Kenya in the Intercontinental Cup, scoring two goals himself.

Maharashtra's Rahi Sarnobat made history by becoming the first Indian woman to win a shooting Gold in the Asian Games in the 25m pistol event. She came into the Asian Games riding on a serious elbow injury and depression about not being able to even lift a gun.