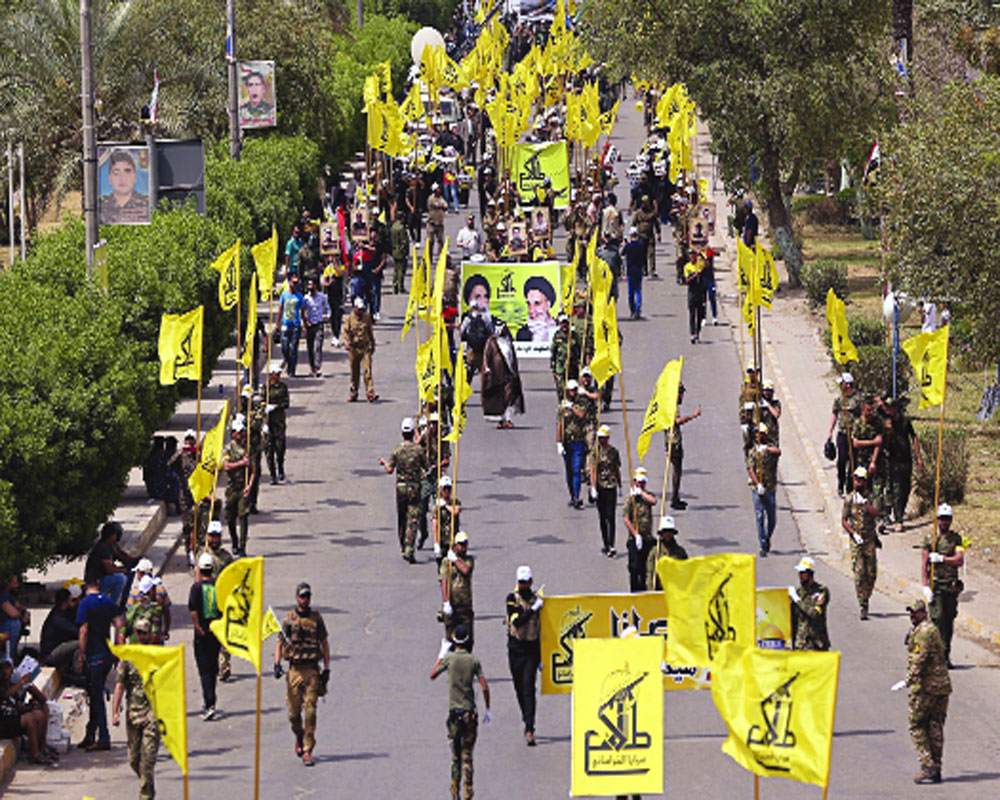 Now, as PMF has decimated ISIS in Iraq, the moot point is: What is its future in Iraq and its influence on Iraq-Iran relations? Despite global pressure in connivance with Gulf monarchical regimes, Shia factions within the multi-sectarian PMF are unwilling to wind up its armed units

The security situation in Iraq, which was ravaged by ISIS, has been on the mend in the last two years. It dawned on me during my recent academic visit to the country. For the first time, I could roam around in the Capital city Baghdad without the requisite security cover. While visiting Baghdad’s posh Karrada neighbourhood — home to all religious faiths, including mosques, Shia mourning centres Hussainiya, churches and Jewish synagogue — I saw the residents relishing the nightlife that was unimaginable in 2014 when I had visited the country. After pulling through its ISIS-influenced tumultuous phase during which Karrada witnessed multiple deadly bombings, shops and restaurants there dare to do business well beyond midnight. And all the credits go to al-Hashd al-Sha’abi or Popular Mobilistaion Forces (PMF).

However, the signs of crippling sanctions and wars are tangible. Since the exit of US occupied forces, the economic condition is still in the doldrums. Unlike neighbouring oil-rich countries, petro-dollars have not given the city a facelift. But certainly things are changing fast, and Iraq is catching up with other West Asian oil-rich countries in infrastructure and other developmental projects.

In his analysis, Fanar Haddad believes that most common handicap among outsiders trying to understand Iraq is the difficulty of keeping pace with Iraq’s fast-changing social and political landscapes. Western and Arab impressions of Iraq have consistently not taken into account Iraqi reality, and worse many outsiders seem unaware of just how Iraqi politics influences trends, personalities, and frames of reference. Understanding Iraqi sectarian relations without knowing these realities stem from that ignorance, which finally culminates into distortive commentary on Iraq’s formidable resistance groups PMF.

PMF is a multi-confessional resistance group dominated by Shia armed groups. It was formed after the rise of ISIS, which overran the large swathes of territory in north and some central parts, to eliminate the terror organisation from the land of oldest civilisation of Mesopotamia.

Iraqi Army, which was weakened after its disbanding post-US occupation in 2003, was in no position to take on the Wahhabi-Takfiri group. The central authority in Baghdad was thrown into disarray and could not respond successfully to the new quandary. In the meanwhile, the clerical establishment in holy city of Najaf and Iraq’s highest moral authority Grand Ayatollah Sayyid Ali al-Husseini al-Sistani intelligently tried to pull out the country from the brink of collapse and issued a historic fatwa calling upon all Iraqis, regardless of their religious or sectarian identities, to join the security forces to repel the looming threat of ISIS.

In response, people, especially Shias, came out in hordes to join new paramilitary forces considering it as “sacred defence”.

The myth of sectarianism

Some oil-rich Gulf monarchical regimes and their stooges have been spreading rumours to sully the anti-ISIS (PMF) force as rag tag militia which runs amok anywhere they want. The Gulf regimes, which have a history of clandestine support of terror groups and pumping petro-dollars in creating mess in the region dubbed it as sheer sectarian and called it as a proxy of Iranian project of mythical “Shia Crescent” accomplishing its regional ambitions. However, Iranian support along with Lebanese Hezbollah in countering the hydra-headed ISIS phenomenon is only based on security compulsions and not on ideological one. As far as the sectarian composition of Hashd al-Sha’abi is concerned, it is cross-sectarian and multi-ethnic armed formations working under an umbrella group and sanctioned by an act of Parliament and a multi-layered commission which supervises its strategies and actions. By virtue of their majority in Iraq, Shia groups form the majority of PMF, and adhere to the ideology of Political Islam as Iran does. However, there is no denying the fact that Shia individuals have committed extra-judicial killings but higher echelons of PMF have reiterated that they must be brought to justice under the law of land. The hullaboloo over “sectarianism” is just a pretext to dislodge the credibility of PMF and Iranian support for anti-ISIS offensive. The sensible clerical leadership of Najaf or any political leader have always tried to prevent any kind of schism between majority Shias and other minority communities in Iraq. On the contrary, the Arab Shias often called as “forgotten Muslims” despite having been marginalised in the larger Arab world by the farce of Arab nationalism have integrated maximum number of political actors in its fold in the post-Ba’thist dispensation.

As far as the sectarian and religious composition of PMF is concerned, it includes cross-sectarian participation. Prominent Sunni politician and former governor of Nineveh province Atheel al-Nujaifi’s Nineveh Guard, previously known as Hashd al-Watani, and other various Sunni groups are integral to PMF. Fursan al-Jubur or Knights of Jubur, affiliated with prominent Sunni politician and former Iraqi parliament speaker Ahmed al-Juburi, too is part of PMF. Similarly, Lions of Babylon Brigades — a Chaldean Christian group led by Rayan al-Kildani and Assyrian Christians, Dwekh Nawsha also known as al-Fedayoun and the Sinjar Resistance Units (SRU) — a Yazidi militia, which came after the breaking off the siege of mountainous Sinjar, is prominent member of PMF.

Last year on December 10, then Iraqi Prime Minister Haider al-Abadi had announced the complete victory over ISIS. Since then the PMF has gained immense popularity among the masses and considered as their first line of defence. But when the menace of ISIS has now come to an end in Iraq, the big question arises: What is the future of PMF in Iraq? The pro-Iran Shia factions led by Hadi al-Amiri and Abdul Mahdi al-Muhandis within the PMF are not willing to demobilise its armed units as they want role in Iraqi politics. Last year in August, major Shia armed factions within the PMF — Badr Organisation, Kata’ib Hezbollah, Asaib Ahl al-Haq of Qais al-Khazali, Harkat al-Hezbollah al-Nojaba of Akram al-Ka’abi, Syed al-Shohada Brigade, Saraya al-Khorasani of Ali al-Yasiri — formed a political front called al-Itilaf al-Fatah or Victory Alliance, to contest the May 2018 general elections along with other tribal and Sunni groups. As expected, they won largest chunk of the votes and played an important role in forming the Central Government in Baghdad under the Prime Ministership of Adel Abdul Mahdi in October this year.

In regional context, Iran sees it as main component of its so-called “axis of resistance” to strengthen its position especially since the beginning of Syrian Civil War in 2011. The friendly Shia-dominated Government in Iraq would not only be important part of the “axis” but would also serve as an opportunity for Iran to scotch the increasingly harsh international sanctions and emanating threats from the US, Israel or Saudi Arabia.

Prominent white-turbaned Sadrist and Asai’b Ahl al-Haq (League of the Righteous) leader Qais al-Khazali had visited southern Lebanon adjacent to Israeli borders and stated his full readiness “to stand together with the Lebanese people and the Palestinian cause.” The bonhomie between Lebanese Hezbollah and Iraqi Shia groups further creates ripples in Israel as well its patrons in the West.

It is an open secret that some injured ISIS terrorists in Syria had been treated in Israeli army’s field hospitals and were given medical aid. Any demobilisation efforts can weaken the resistance against ISIS as long as the existential threats are dormant, not completely eliminated. Sensing the transnational overtures of these Islamist groups, the US Administration under President Donald Trump is pressuring Iran to curb ties with the PMF factions with renewed punitive sanctions by dishonouring the JCPOA nuclear deal.

After cutting its teeth in countering the ISIS crisis, the victorious PMF is posturing itself to play an important role in Iraqi politics in post-ISIS scenario. An Iraqi student said, “They (PMF) have given their life so we don’t have to shed our blood on the streets of Baghdad. So how can we forget them?” People’s sentiments are with PMF and they don’t want PMF is disengaged in Iraq’s life in near future.