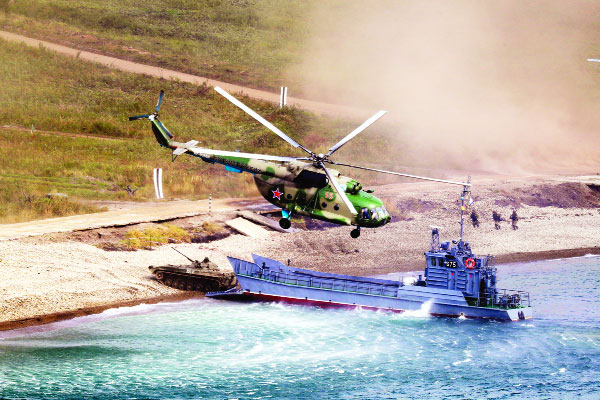 Vostok-2018 is about sheer show of military might of Russia under Vladimir Putin against an overwhelming aggressive NATO. When the world is gradually witnessing an ebbing American leadership, the Russian President offers an alternative

Russia is undertaking a week-long war game called “Vostok-2018” or “East 2018” in the Eastern part of Siberia from September 11 with the sole purpose of practising rapid deployment of a large number of forces, aircraft and vehicles, criss-crossing western and eastern frontiers of Russia with ease. Since this exercise began, it has been touted as the largest war drill conducted by Russia since the Cold War. The last such exercise was conducted in 1981, known as Zapad 81.

First of all, this drill is about sheer show of military might of Russia under Vladimir Putin against an overwhelming aggressive expanding the NATO that has over the years succeeded in encircling the country. The exercise displays to the world Putin’s capability of roping in major powers of Asia, like China and very strategically Mongolia, for Vostok-2018, which Russia used to hold solo earlier.

China’s participation in the war game proves beyond doubt that the Russia-China relationship has come to a new level of understanding. China’s Ministry of National Defence said, “The aim of the Vostok-2018 is to strengthen strategic military partnership between the two countries and deepen friendship and cooperation and further boost the two countries’ capability to deal with security threats in the region”. The exercise is aimed more at traditional than non-traditional security threats in the region.

Looking at the broad contours of this battle preparation, one can say that it is a rehearsal against any possible aggression by the US and its allies in the region or to counter America’s international influence.

Further, one has to understand the post-Soviet Russia carefully. It is the West and its allies that goaded the megalomaniac Putin into mass propaganda and action. When the Soviet Union collapsed during Perestroika and Glasnost of Mikhail Gorbachev, the obvious consensus surfaced on board was that it was a systemic failure and triumph of the liberal democratic order. And, when the power passed on to Putin from Boris Yeltsin, he desperately wanted a place for Russia within that Western order.

Interestingly, Putin was the first foreign leader to call George W Bush after 9/11 in the US, and offer his help in Afghanistan. The most profound reason for Putin’s offer was that around the same time, Russia was fighting its own war against the radical Islamic separatists in Chechnya. Therefore, Putin wanted to join America’s “global war on terror” as an ally to crush internal Muslim uprising.

But Washington ignored Moscow once and for all, even while preparing for an attack on Iraq. And, a wounded Putin proclaimed his disdain for the West in the Munich Conference on Security Policy in 2007: “Only two decades ago, the world was ideologically and economically split, and its security was provided by massive strategic potential of two superpowers.” He added, “It is the world of one master, one sovereign dictated by the US. The current order is ‘unacceptable’ and the time has come to ‘rethink the entire architecture of global security’.”

Julia Ioffe, an expert on Russia commented, “Nonetheless, Putin has spent the decade since that speech making sure that the US can never again unilaterally manoeuvre without encountering friction; and most importantly, it can never depose him.”

Last year, the NATO dispatched four battalion-sized battle groups, one deployed in Poland and one each in three Baltic States of Latvia, Lithuania and Estonia. Meanwhile, the US started bringing back heavy armoured units to Western Europe. Always suspicious of Moscow’s moves, Washington and the rest of the Western capitals, particularly the NATO nations, alerted their intelligence and spying network around Russia and its peripheries. But it seems the sudden rise of Putin has literally failed the vigilantism of the West to a great extent. Russia’s alleged intrusion into the last US Presidential election has proved it very well.

Besides, much beyond the traditional ties between Russia and China, what has been marked is an emerging closer economic bonding between the two, wherein not only they are trying to come up with a strong coalition of like-minded nations, but also developing their bilateral economic might to stand up to any economic crisis in future. The official Xinhua news agency records that China’s direct investment in Russia reached up to 72 per cent in 2017. Now, with Donald Trump’s reactionary policies taking a heavy toll on China’s trade with the US, chances are high that the Communist country will move closer to Russia. And this is visible as Russia recently became the 9th largest trade partner of China.

Meanwhile, Putin is also smartly moving into this opportunity and offering China a comfort zone as bilateral trade and close cooperation between the two giants could be equally beneficial than resurfacing Cold War rhetoric between the two. Thus, Russia is fast turning into the largest oil supplier to China as the latter has to make fuel available for its billion-plus population and make hundreds of manufacturing outsourced plants functioning.

Around the same time, Gazprom, Russia’s largest energy major, is building a 3,000 km gas pipeline which will be connecting Eastern Siberia to China’s border areas. Thus, both are truly celebrating their partnership and seem to get going against the backdrop of Trump’s invectives against the two major players in the global scene. Thus in June, Chinese leader Xi Jinping called his Russian counterpart his “best, most intimate friend”.

On the other hand, combat experience and modernisation gleaned from the battlegrounds of Georgia and Ukraine will be far-reaching. The Russian military is still in the process of transition and Putin is desperate to come out of the old style functioning of the armed forces. However, defence experts have mixed opinions about Moscow’s modernisation of armed forces under Putin. Dmitry Gorenburg of Harvard University said, “The modernisation move started in 2009 after Russian military’s lacklustre performance in the Georgian warfield in 2008. There is further improvement in the speed of decision making and communication of decisions to the troops and interoperability among military branches, followed by the replacement of Soviet-era equipment that was rapidly reaching the end of its service life.”

This shows how the need was felt to upgrade military and allied services so as to respond to an ever-growing encirclement by the NATO. Another analyst Michael Kofman of the Wilson Centre’s Kennan Institute highlights, “By 2012, Russia reorganised its armed forces from a Soviet mass mobilisation army into a permanent standing force and began improving quality across the board.”

Thus from 2009 to 2012, military modernisation programme had completed a full circle which placed Putin to a more comfortable level to jump into the Syrian quagmire in 2015. Putin’s full-fledged support to the beleaguered Syrian President Bashar al-Assad, in fact, helped him survive till date. With this, the entire war game in the troubled West Asia has taken a new shape as then American President Obama was not keen on the direct involvement of the US troops on the ground. From a distant player, Russia has pushed itself to the centre stage of the most volatile war game in the world. Gradually, Putin has turned tables on the US to regain role as a key player in deciding the fate of the Syrian regime.

When we see Russia’s active aggression or participation in global conflict zones, we equally need to review how America and its allies spread their vigilantism almost in each part of the world. Russia’s advance to former Soviet Republics, including Georgia and Ukraine, could be called as a comeuppance to the West which had fast expanded to include the same group of nations once the USSR broke down.

Today what bothers Putin more is not the continued encroachment of the West on Russia’s periphery, but its serious meddling in the country’s domestic politics. Is it the time for action for Putin? Indeed, Vostok-2018 will send a strong signal to the NATO and its allies. When the world is gradually witnessing an ebbing American leadership, Putin offers an alternative. Beyond his war mongering and muscle flexing, he is capable of bringing massive political reform at his home turf so as to give an audience to the voices of dissent. It is a big irony that leaders like him are always paranoid about their security, tenure and future role in public life.

Lord Acton rightly said, “Everybody likes to get as much power as circumstances allow, and nobody will vote for self-denying ordinance.” The same way, Putin would continue to extend his despotic rule as long as he is alive. The international community may experience many more Vostok-2018s on the days to come.