Stereotyping for lynching in Manipur!

Stereotyping for lynching in Manipur! 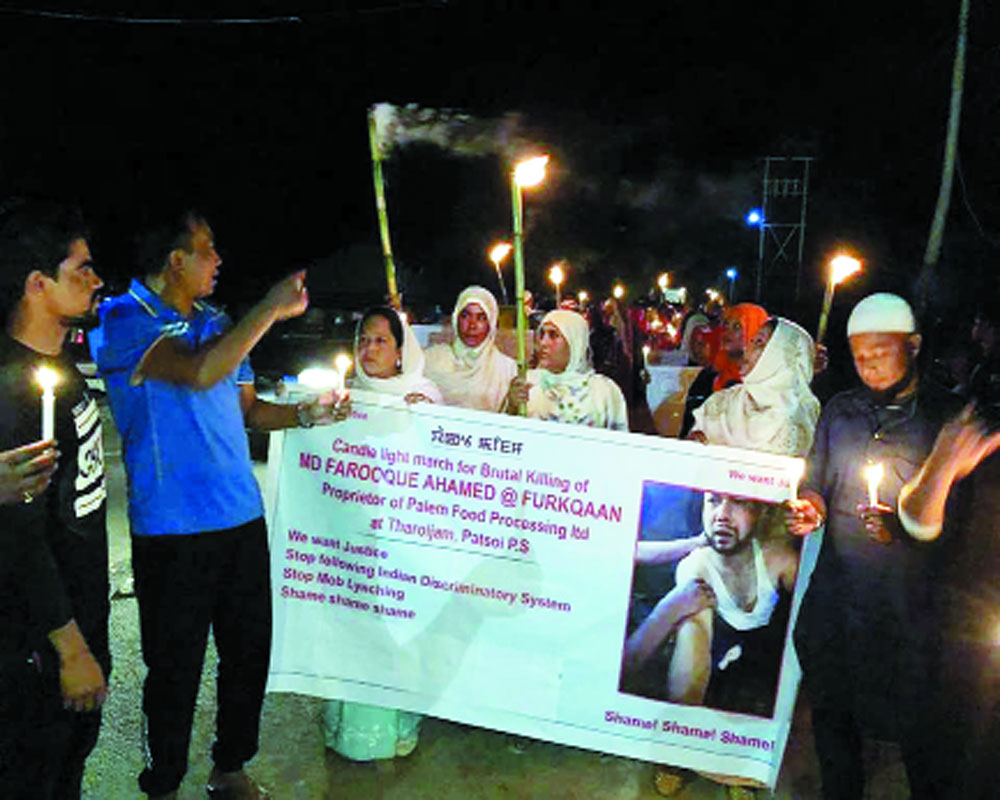 The State Assembly on December 21 passed the Manipur Protection from Mob Violence Bill to prevent lynching by providing exemplary punishment like public humiliation, social boycott, and regorous life behind bars

Though Manipur has become the first State in India to pass a Bill which recommends life imprisonment for those involved in mob violence if it results in the death of a person, there are many who strongly feel that more needs to be done on the ground considering spate of lynching incidents in a peaceful State.

A wave of lynching of the members of lower and marginalised sections of society has swept the country for various reasons, including alleged theft, child lifting, cow protection and caste-related violence.

This prompted the Supreme Court to direct Parliament on July 17 to enact a law to curb mob lynching and the State Governments to take certain measures. From July 17 to September 7, only 9 States and two UTs in the country complied with the order of the court. Therefore, on September 7, the court asked the remaining States and UTs to file compliance reports within a week.

Before the Manipur Government could comply with the Supreme Court order, on September 13, Md Farooque Khan was lynched creating one of the most brutal and unfathomable episodes in the contemporary history of Manipur.

The news became a flashpoint, in both electronic and the print media, because of the barbarity with which the mob took the life of Farooque son of Md Nasib Ali (a retired deputy inspector of education under Lilong sub-division) from the Pangal-inhabited Lilong Mayai Leikai in Thoubal District, Manipur.

Also, the Statewide high-decibel protests against the lynching had never happened before, indicating that Manipuris were fed up with such crimes. The heinous crime was perpetrated by a mob in the Meitei-inhabited Tharoijam village, Patsoi Police Station, Imphal West, Manipur over an issue of alleged bike lifting.

The mob flogged the victim and then left him to die even as police remained a mute spectator. The victim was a MBA graduate. He was into entrepreneurship and recently established Palem Foods Private Limited near Wangoi bazaar, Imphal West district.

Here is a systematic analysis of the incident based on the media reports. Firstly, the probable reason of why he went to Tharoijam village with two companions is not clearly established yet. According to the media reports, locals alleged that the two companions of Farooque tried to lift a bike in the late evening of September 12, on which Gerani Singh alarmed his neighbours, and, following that, the two fled the scene but Farooque was caught “red-handed”. The ensuing mob allegedly branded him as a thief, though other sources claimed he was waiting outside for his companions who were in Gerani’s house for some personal business.

There has been an animosity between the majority (Meiteis) and the minority (Pangals) since the 1980s. It is believed that the animosity is an outcome of the social engineering by some Meitei politicians and ultras that emerged from the crucible of insurgency but had got disoriented for reasons best known to them.

It may be safely presumed that those ultras were repurposed or oriented to carry forward ethnocentric ideals and inculcate Meitei chauvinism in the name of civil society organisations. As a consequence of the social engineering, on May 3, 1993, a riot broke out between the Pangals and the Meiteis in Manipur, resulting in the death of around one hundred Pangals.

In addition, Pangals have disproportionate representation in every sphere in Manipur, including the Assembly, higher education, workforce and Government jobs, even after they were allotted four per cent reservation.

Second, was the stereotyping of the Pangals as huranba (thief) the reason behind the lynching of a Pangal man in a Meitei-only village? A misconstrued perception of the Pangals of being vehicle lifters, petty criminals, drug lords or peddlers has been propagated by some people with vested interest.

Against this backdrop and the prevailing animosity that gets boosted intermittently by the hate comments on social media, it is plausible that Farooque was lynched. Tharoijam villagers’ murderous streak was activated by the stereotyping of Pangals as petty criminals as corroborated by the noted journalist and editor of Imphal Free Press Pradip Phanjoubam (https://www.bbc.com/hindi/media-45590653?ocid=wshindi.chat-apps.in-app-msg.whatsapp.trial.link1_.auin) and the engineered communal revulsion, both of which shot the nondescript village to infamy.

Third, what made the Tharoijam mob resort to that degree of brutality and barbarity? It is apparent that the superiority complex of Meiteis granted them a licence to lynch the victim which could be allegorically compared to a hunter’s self-granted licence to hunt. The degree of brutality and barbarity committed by the mob was unmatched. When the victim asked for drinking water and all that he got was “does a dying person also feel thirsty” jibe (as seen in one of the viral videos of the lynching).

They allegedly started flogging and torturing by piercing his body with iron rods around midnight and continued till the morning even in the presence of Manipur Police personnel, as seen in some viral videos of the incident.

Fourth, are the law enforcers serious enough to curb such inhuman crimes? The law enforcers have so far arrested six culprits, including the main accused, M Gerani Singh (a sepoy with the Indian Reserve Battalion or IRB), and the case is being investigated. Some policemen, who were seen waiting for the victim to die in one of the videos posted on social media, have been either suspended or dismissed from the job. The Government also has entered into a memorandum of agreement with the victim’s side.

Further, an Ordinance was reportedly approved to curb lynching in Manipur in compliance with the Supreme Court’s July 17 order. But how about conducting in-camera trial in a fast-track court of all lynching cases in Manipur in the past five years, as ordered by the Supreme Court, and initiate an academic discourse to get to the socio-politico-historical factors contributing to lynching?

No compensation for Farooque’s life has been officially announced by the Government, although the Supreme Court in its July 17 order had ordered a compensation to be paid within 30 days after computing the amount giving “due regard to…bodily injury, psychological injury and loss of earnings including loss of opportunities of employment and education and... legal and medical expenses”.

An academic discourse is needed because in the lynchings in Manipur, a pattern of blaming the victims as thieves could be observed. Md Hasmad Ali, a primary school headmaster, was killed allegedly for cow theft. Mohammad Sadam and Mohammad Farooque (Imphal), both school students, were lynched in a communal-like incident in April 2016 at Mayang Imphal Yangbi Garden, Imphal West. In June 2017, Md Rakib Ali (19 years) and Md Anish (20 years) were lynched by a mob in Thoubal district, and many more cases of lynching in Manipur happened at Yairipok, Khangabok, Heingang Ahallup and Iram Siphai.

It is high time we eliminated stereotyping and stigmatisation from society to uproot the lynching culture. For this, the Government should desist from ‘manufacturing insecurity’ (May 21, 2018, Indian Express).