The changing face of Delhi

The changing face of Delhi 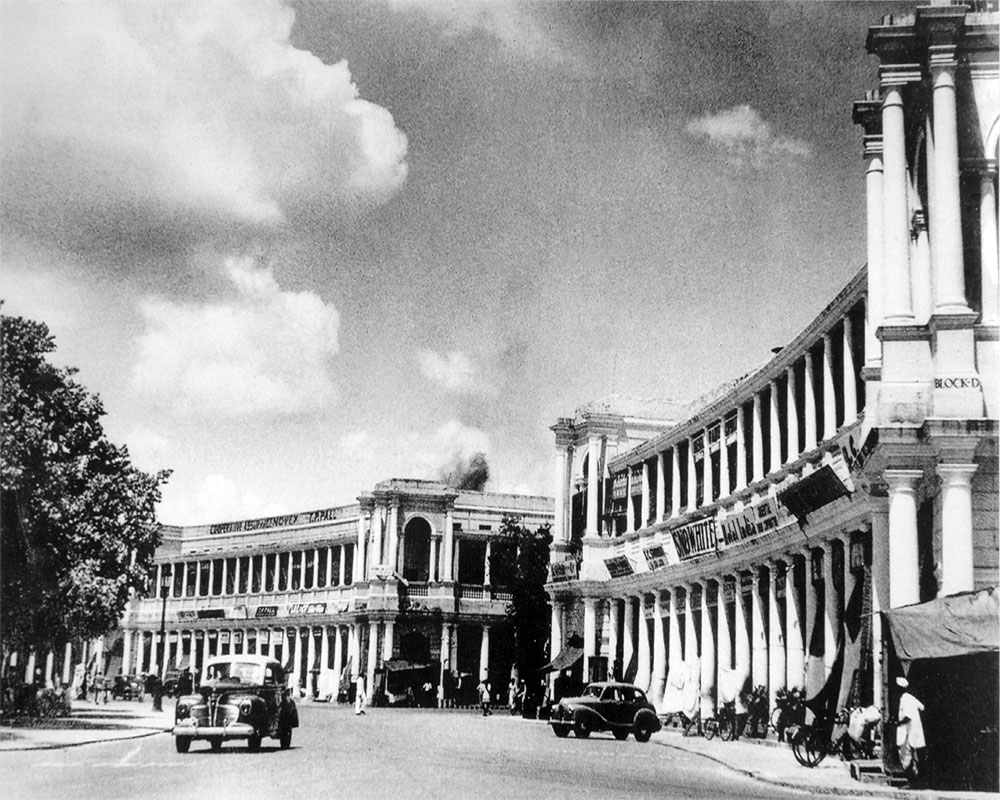 The dramatic increase in Delhi’s population after Independence brought along new challenges and opportunities, nowhere more so than in the heart of the city, Connaught Place, writes Swapna Liddle in her book. An excerpt:

Both New Delhi and Connaught Place have changed significantly in the more than seven decades since Independence. The years after Independence were a time for recovery from the tribulations of Partition, but also a celebration of the new nation’s hopes and dreams. Nowhere were these effects felt more keenly than in Delhi. The population of Delhi as a whole grew from about 900,000 people in 1947, to 1.4 million in 1951. This dramatic increase brought challenges, but it brought new opportunities too, and nowhere more so than in Connaught Place. There was initially an ad hoc crowding of the corridors, as refugee shop owners, not finding other space, occupied verandahs and sold everything from cloth to dried fruits and stationery. This was not a long-term solution, however, and they were soon moved out to Baba Kharak Singh Marg and Panchkuian Road. Stalls were also set up along Janpath.

Not all the incoming refugees had to make do with roadside stalls. There were some who had the resources to rent space and open establishments in posh Connaught Place. Prakash Krishna arrived in Delhi from Lahore with Rs 60,000 worth of books, and set up a successful bookshop — Ramkrishna Bookshop — which survived into the 1990s. More far-flung commercial spaces were also being created. At the location where a couple of provision stores to supply the barracks of Lodi Estate during World War II had stood, a new shopping centre was built —Khan Market.

Government enterprise, too, was now entering the retail business, with a view to encouraging India’s traditional crafts. These new institutions were set up in various temporary structures created during World War II, which had now been abandoned. The Central Cottage Industries Emporium was set up in office buildings that had been built on Janpath as offices for the US army officials. Here it stayed till 1995, when it moved into the grand six-storey building it occupies today. The first set of state emporia were established in the 1960s, in a structure interestingly called the ‘Theatre Communications Building’. This had literally housed the communications services of the theatre of war in the Pacific. The emporia moved to the Baba Kharak Singh buildings in the 1970s.

The restaurant business expanded after Independence, with increased demand due to the growing population. Kwality’s, which had begun with ice cream, evolved into a restaurant serving Indian as well as Western cuisine. The proprietors of Kwality’s built another popular restaurant, Gaylord’s, with elegant Art Deco interiors. The Nirula’s family was also expanding, with the Chinese Room, Delhi’s first Chinese restaurant, being inaugurated in 1950. Even with the departure of the British and American clientele, there was no lack of Indians who were willing to be adventurous in the matter of cuisine. In 1960, Nirula’s set up La Boheme, serving Austro-Hungarian food.

Restaurants were not only for the gay party crowd. The cafes in particular became a hub for writers, poets, and artists, as was the case with Alps, and then Indian Coffee House, both on Janpath. The early post-Independence years also saw new developments in the fields of art and culture, and many of the new national cultural institutions had their beginnings in and around Connaught Place. Triveni started with one room here, and Gandharva Mahavidyalaya was housed in a building near Odeon Cinema. The Bharatiya Natya Sangh and the Bharatiya Kala Kendra were both located in Shankar Market, but later land was allotted for the latter in the Mandi House area. Mandi House in time became a cultural hub, with Triveni as well as several other institutions finding a home here.

In other areas around Connaught Place, new infrastructure, to meet the needs of the capital of a developing independent nation, was put in rapidly after Independence. A large plot of land, originally earmarked for a ‘fuel plantation’, was used for an exhibition ground. This was later called Pragati Maidan.

The foundation stone for a Supreme Court building was laid in 1954, and that for the National Museum in 1955. The need to house an exploding population was an early concern. New housing began to be constructed fast, though some immigrants ended up staying for years in what had initially been temporary refugee camps in places such as Purana Qila. During the course of those years, housing was also required for the growing numbers of Government employees. This was because, in contrast to the limited functions of the colonial state, the Government of newly independent India sought a bigger role, from making investments in industry to taking measures for the welfare of citizens.

To provide housing, large areas of land lying vacant in the eastern portion of the New Delhi site were filled in. Residential ‘colonies’ were built — Kaka Nagar, Bapa Nagar, Pandara Park for Government officials; and Sundar Nagar and Golf Links for private owners. The vast majority of those displaced by Partition were accommodated in colonies that were spread beyond the ‘core imperial area’ in the blocks of land that had been far-sightedly acquired for ‘future development’.

These were the colonies mainly in west and south Delhi. With the rapid expansion of these new colonies, by 1953, the new administrative districts of south and west Delhi had to be created. Interestingly, these new developments in a way drew inspiration from the original garden city plan of New Delhi; so instead of compact dense plans or high-rises, they tended to favour low-rise development of bungalows on plots, with local parks and tree-lined avenues. The first few multi-storey apartments were built by the Government in Rama Krishna Puram in the 1970s, but for long were the only ones of their kind.

When I first came to live in Delhi in December 1985, I lived not far from RK Puram, in Moti Bagh. I was, therefore, amused to read that Swinton had said in 1912 regarding the site chosen for the new capital, ‘To the south the site has always been unlimited. Someday it may extend beyond Arakpur Bagmochi.’ To me it seemed in 1985, and it certainly does today, more than a hundred years after Swinton’s remarks, that Bagh Mochi, since renamed Moti Bagh, is very much a part of central Delhi. The urban sprawl now extends beyond even the limits of the ‘enclave of Delhi’ originally created in 1912, which has since become the National Capital Territory of Delhi.

Connaught Place, too, was changing when I arrived in Delhi in the mid-1980s. I saw the beautiful red-coloured Statesman House pulled down, to be replaced by what, in retrospect, is not a bad building at all! Jeevan Bharti, or LIC building, was even more of a shock in its sharp departure from the classical architecture of Connaught Place, though it is undoubtedly an icon of modern architecture. These and other dramatic high-rise buildings were required for a modern business district, but it could be argued that they detract from the heritage character of New Delhi’s grandest shopping centre.

Ironically, as the growth of the business district was evidenced by the multiplying high-rises, the shopping centre itself declined somewhat in the 1980s and 1990s. People were increasingly shopping closer home, in neighbourhood markets that were evolving into bigger centres, such as South Extension Market and Khan Market. The restaurant business survived better, though inevitably some of the older restaurants were replaced by others. Another cause for the malaise was a deteriorating physical condition, and some years of Metro construction, which inevitably disrupted infrastructure. The renaming of Connaught Place as Rajiv Chowk and Connaught Circus as Indira Chowk in 1995 seemed to underline and sum up the degradation of the heritage of this historic landmark.