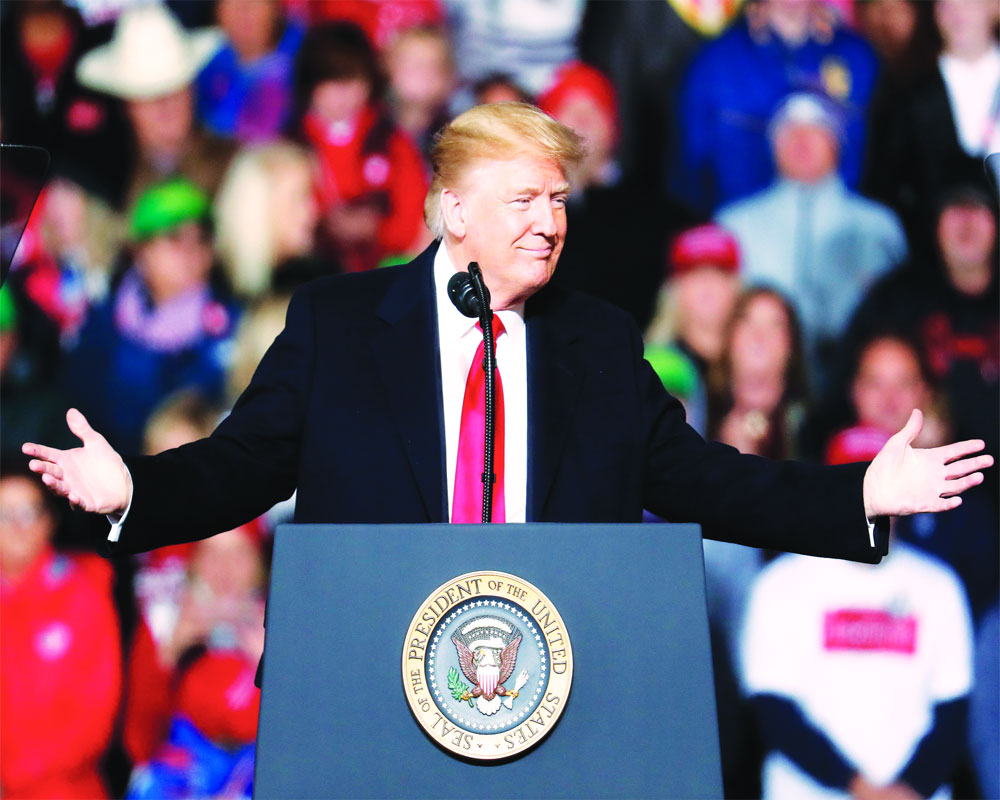 The core refrain of the American intent apart from the present entreaty at the United Nations General Assembly is that the US is not retreating inside a cocoon but it is being more practical and business like in factoring in the transactional costs with the rest of the nations. Trump declared, as he had done in his campaign trail, that there can be no more free lunches from the American fold

The practice and theoretical rendering of the SDGs (Sustainable Development Goals) is here to stay in the larger international system. In the context of international organisations, as an aftermath of the World War-I, the lengthening shadow of then empty seat at the Council of the League of Nations (LON), still holds a grim grain of relevance.

American President Woodrow Wilson aimed to make the United States a member of the LON and also as a key player in the international arena. As the American Senate rejected the President’s offer of a legislation to make US a member of the League’s Secretariat and the Council, the argument which became fetid was that the lengthening shadow of the American empty chair had a final debilitating impact upon the future of the League of Nations as it lost its legitimacy and power sans America’s formalised presence. This year the green Granite backdrop of the General Assembly witnessed a mixed narrative for the entire panoply of world states.

American President Donald Trump deftly occupied his seat of power at the United Nation’s General Assembly with the American representative, Nikki Halley, by his side and charted out his “Novae World Order” with quintessential American and national interest oriented talk. He eclectically congratulated the nations of the larger world in having stuck to the task of ameliorating the human security conditions. He categorically hailed the Indian nation for being a true blue historically “Free society set-up” which had left no stone unturned to elevate the impoverished section of the denizens, who, were mired in the quicksand of poverty, malnutrition, disease and unemployment. Much earlier in the National Security Strategy of 2017, President Trump had egged on India and Prime Minister Narendra Modi to assume a globally acceptable leadership role playing for the Indian nation and to move up the ladder of being a superpower.

The SDGs are not a new grain of salt as they have their roots hidden in the global welfare idiom of the Indian state’s pantheon and also in the entrepreneurial zeal of the United States of America. The American President in his UNGA address in New York charted out the trajectory of allies and foes alike, which, the US is confronted with in the contemporary context. He appreciated the entire world as part of global war on terrorism for having extricated out the ISIS in nations such as Syria and Iraq. He earmarked Iran as the key threat for the entire West Asian and the global comity of nation states. He declared Iran and its attendant established under Khomeini as being the global sponsor of terrorism in West Asia and beyond. Last year, the American President in his UNGA address to the world had solicited international cooperation to get rid of the “Rocket Man” Kim-Jong-Un. North Korea’s riddance was the last year’s pet peeve but with the Trump-Kim summit becoming the nom de plume of demilitarisation and disarmament, the attention is focused on Iran with new sanctions being slapped on it.

Along with the American strategic ire comes the declaration to the Iran’s trade partners not to do commerce and trade with Tehran as that would attract sanctions, but nations such as Turkey have ignored the Trump’s clarion call despite a fracas delimiting the horizons of the US-Turkey relations. But, in a manner, President Trump recognised the multilateral nature of the international system with gory consequences for the forces inimical to America’s interests.

He declared as he had done in his campaign trail, that, there can be no more free lunches from the American fold, and the European nations and others will have to pay up for the American security umbrella ushering in, “Accountable Securitisation” as the smooth sailing factor for the world’s larger well-being.

The drawing of frontiers and fences is akin to what President Trump premises his larger policy on. The President congratulated his establishment for having signed a new trade deal with Mexico in the context of what President calls as the “slighting of the sovereignty” for Washington. The narrative of global cooperation with the clarion call to be co-equals in contributions to international organisations was one of the oft-repeated refrains of the Presidential communication to the larger world of recalcitrant nation States, both in the context of spatial terrorism and geo-economics. Still, the new role playing envisaged for New Delhi is a “first” in many senses that nations such as India can act as bridges to the orient and can play a domineering role in the upkeep of balance of power and peace in the Asian continent.

Power, prosperity and peace, emerged as the tripod-foundational elements of the US foreign policy which included a moral-liberal entreaty to the larger comity of nations. President Trump castigated the brutal regime of Bashar-Al-Assad and congratulated the reforms being undertaken in Riyadh along with the stability role play for Israel in a new West Asian regional order in the near future. Inis Claude’s seminal work on the United States is now read more as a classic text and its title itself pinpoints towards the larger role of the United Nations as the Book is titled “From Swords into Ploughshares.”

The Washington Post writes that the initial part of President Trump’s Speech consists of boasts straight out of the hyperbole of his Presidential campaign trail. The poser can be that how can, “addressing the threats facing the World and talking about a vision to usher in a lifeline to the larger humanity” be equated with plane jane rhetoric and mumbo jumbo?

President Trump was not wrong in declaring that United State’s economy had added 10 trillion dollars in wealth and unemployment had receded by half and the stock market is at an all-time high in American history. He contended, “The United States is a stronger, richer and safer country” now with the 2018 military budget being augmented to 716 billion dollars, an improvement over 700 billion dollars in 2017. The idiom being the stratagem to increase the girth and the striking might of the American Defense establishment.

In a way the unilateralism, with its precedent, patriotism, is the bulwarks of President Trump’s twin pegs of foreign policy and governance. Still, the US might be withdrawing as of now, but not into a self-imposed shell as President Trump believes in his own Monroe Doctrine of the contemporary times. The core refrain of the American intent apart from the present entreaty at the United Nations General Assembly is that the US is not retreating inside a cocoon but it is being more practical and business like in factoring in the transactional costs with the rest of the nations. Thus, akin to his National Security Strategy of 2017, the UNGA speech was a reiteration of what the United States intends to mete out to the rest of the comity of nations which might have its stereotypical bluster but is definitely well-conceived and well delineated. The new liberal order of the Demos is here to stay even if it appears hardnosed to some of the other forces in the World system. With issues such as Jude aspirant Bret Kavanaugh rankling the domestic political firmament and allegations arising from a few domestic quarters, President Trump can count on a novae veneer to his foreign policy which has characteristically concluded that it is not only Moscow, but a blithe Beijing too which has unwelcomingly intervened in the American electoral process.

The United Nations General Assembly utterings spell a new aggression with an intent to clarify the American approach in a fast changing comity of nations which is something on the lines of the, “New World Order” approach of President George Bush in the year 1991.