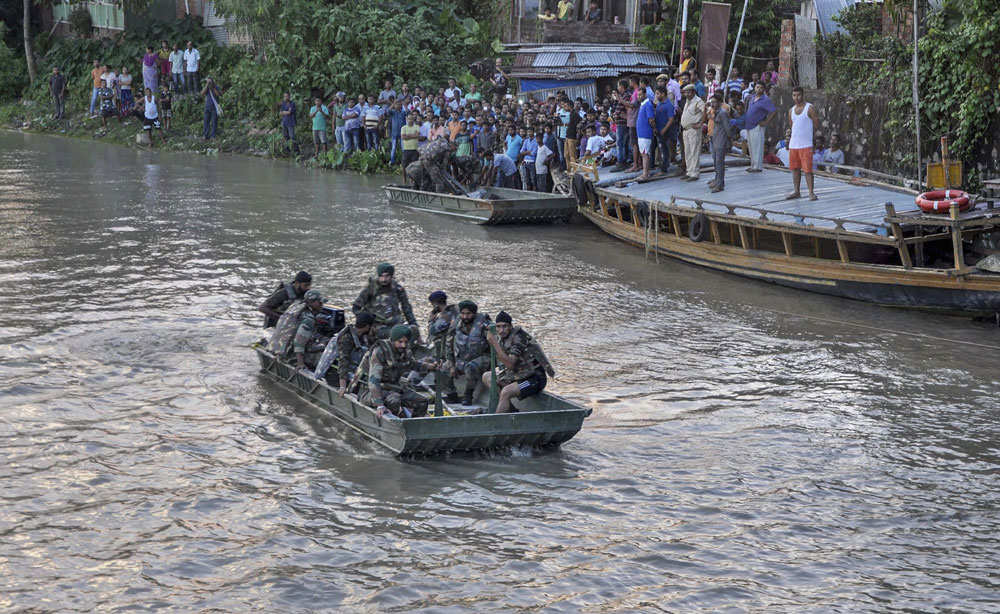 Three persons drowned and at least 11 others are missing after an overloaded motorised country boat capsized in the Brahmaputra river near here after hitting a rock on Wednesday, officials said.

Ten passengers have been rescued, while 12 others managed to swim to safety, Kamrup Deputy Commissioner Kamal Kumar Baishya said.

The boat with 36 passengers was on its way to north Guwahati in Kamrup district across the river from Fancy Bazar ferry ghat here when its engine developed a technical snag around 2 pm and hit a rock near the bank of Ashwaklanta Temple, he said.

The boat was carrying 18 motorcycles illegally and only 22 passengers on board had valid tickets, Baishya, who is supervising the rescue operations at the site, said.

One girl student of the university died on way to the hospital after being rescued, while four others of the institute who were also in the boat are missing, the deputy commissioner said.

The SDRF and NDRF personnel rescued ten passengers of the boat who had managed to cling to posts of a water supply project being constructed on the river and 12 others swam to safety, he said.

According to the passengers rescued, there were more than 40 people in the boat, including women and children.

The rescue operations have been suspended for the night due to low visibility and will resume tomorrow morning, officials said.

Assam Chief Minister Sarbananda Sonowal has instituted a high-level inquiry into the capsize and it will be headed by Additional Chief Secretary Jishnu Baruah.

The Inland Water Transport has temporarily suspended plying of country boats on the Brahmaputra, officials added.