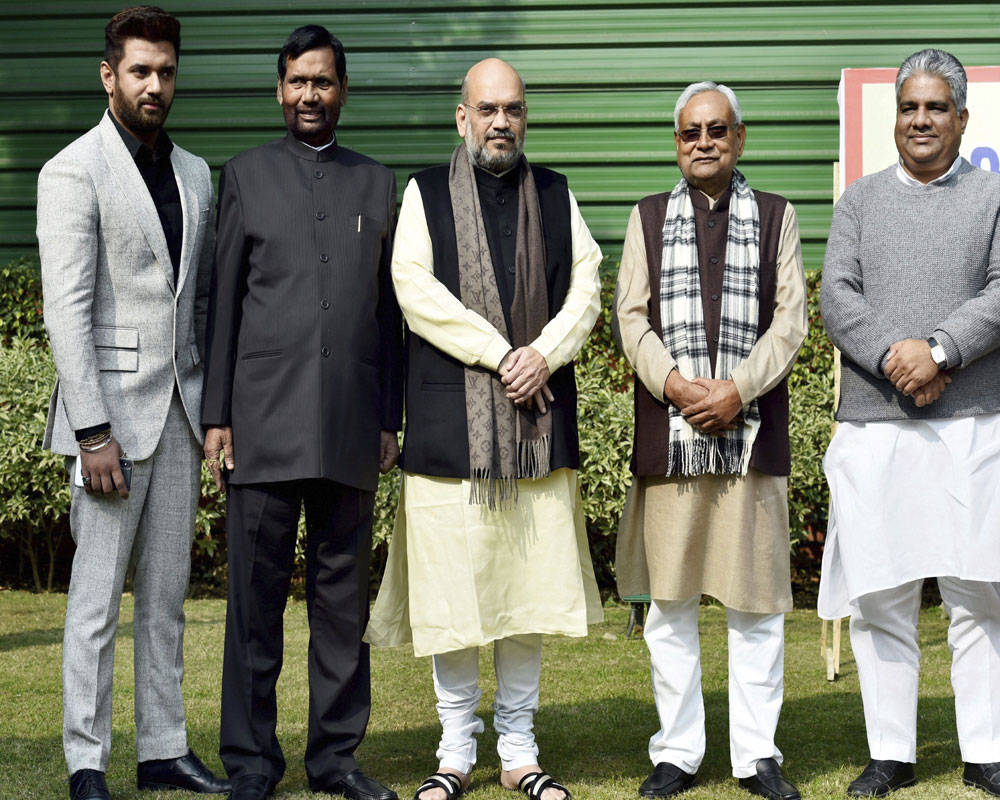 Sealing the seat-sharing arrangement for the Lok Sabha elections with Bihar allies, BJP president Amit Shah Sunday announced that his party and Chief Minister Nitish Kumar's JD(U) will contest 17 seats each, while Ram Vilas Paswan-led LJP will fight on the remaining six.

Paswan will be sent to the Rajya Sabha at the earliest opportunity, he told reporters here, following a brief meeting with Kumar and the Lok Janshakti Party chief, who is also a Cabinet minister in the Modi government.

Shah asserted that the ruling National Democratic Alliance (NDA) will win more than 31 seats it had in 2014 and expressed confidence that it will come back to power in 2019. The state has 40 Lok Sabha seats.

The deal suggests a victory of sorts for the LJP, which had adopted an aggressive stand seeking a better bargain from the BJP after the exit of Upendra Kushwaha-led RLSP from the ruling alliance.

Kumar too has managed to underline his importance for the saffron party, which will now contest on fewer number of seats than it had contested in 2014 and won 22 of them. The BJP will now have to let go of at least five of its winning seats.

The JD(U), which had fought the 2014 polls independently, and the LJP, which was a BJP ally, had won two and six seats respectively.

Shah said all allies will soon decide on distribution of Lok Sabha constituencies among them for fielding their candidates in 2019.

Paswan, whose son Chirag had created a flutter with his comments seen as critical of the BJP and the central government, claimed Sunday there was never a problem in the alliance as he has nurtures the "NDA tree" for five years under Modi's leadership.

A government under Modi will be formed again, he said.

The Dalit leader also thanked Finance Minister Arun Jaitley, who played a role in brokering peace between his party and the BJP.

In his comments, the Bihar chief minister, who enjoys good equations  with Paswan, noted that the NDA had won 32 of the 40 seats in Bihar in 2009 even though results across the country had gone against it.

"This time we will do better than that," he said.

Commenting on the decision to send Paswan, presently a Lok Sabha member from Hajipur in Bihar, to Rajya Sabha, Kumar said it is a recognition to his long service to the country and also thanked the BJP for the decision.

Paswan is a nine-term member of the Lok Sabha and the decision means that the 72-year-old leader is unlikely to contest any more popular election and will be handing over the reins of the party to his son, who was also present during the announcement, in the near future.