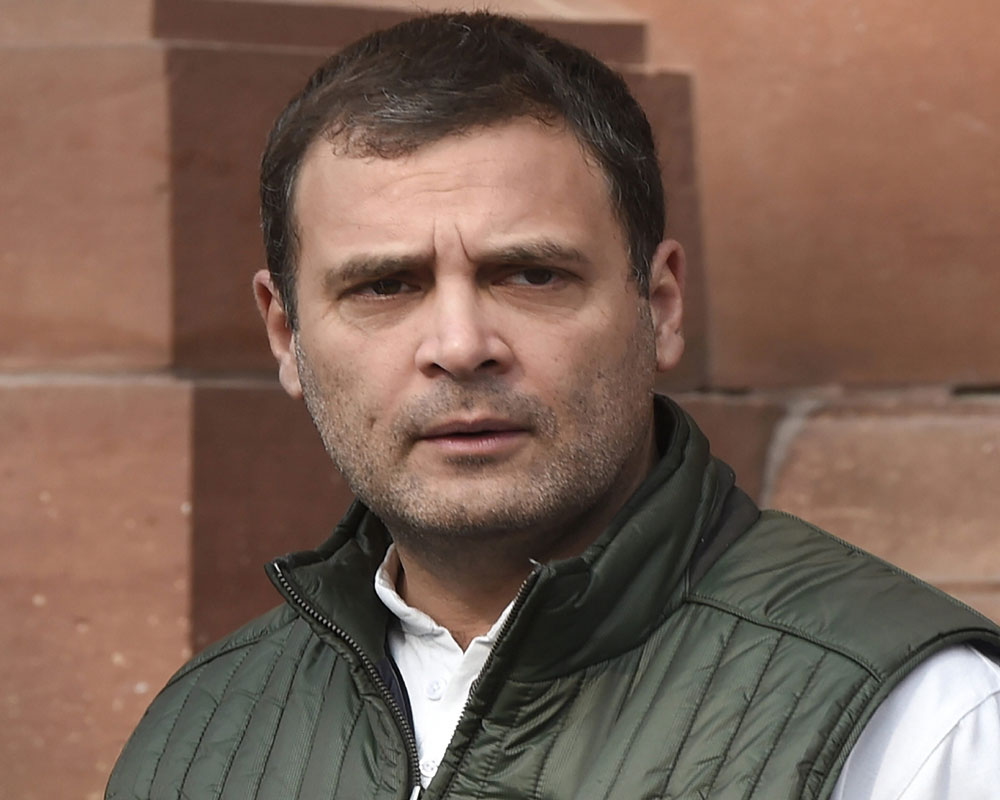 Congress chief Rahul Gandhi on Thursday held marathon consultations with senior party leaders, including Sonia Gandhi, to select chief ministers for newly-won Rajasthan and Madhya Pradesh, apparently stymied by a tussle between the old and the young guard in the party.

As party members and the media waited for a word to emerge, Gandhi put out a curious tweet: "The two most powerful warriors are patience and time," Gandhi said in the tweet, quoting Russian writer Leo Tolstoy,  along with a picture of him flanked by Jyotiraditya Scindia and Kamal Nath, the two top contenders for Madhya Pradesh.

Rahul's sister Priyanka Gandhi Vadra also visited his house while intense parleys were on, but there was no confirmation whether she was a participant.

As hours went by without an announcement, tension and sloganeering rose among supporters of various contenders, spilling into violence in some areas of Rajasthan.

The 41-year-old Sachin Pilot and Ashok Gehlot, 67, the two hopefuls for Rajasthan, appealed to party workers to maintain peace and discipline, saying they have full faith in the party leadership and would abide by its final decision.

After briefing Gandhi, AICC in-charge of Rajasthan, Avinash Pande, told PTI: "We have given a detailed report on the views of party MLAs to the Congress president, who will take a final call on chief ministers. The decision will be announced at the legislature party meeting in Jaipur."

In Chhattisgarh, some scuffles took place outside the residence of state party chief Bhupesh Baghel (57), who is one of the contenders apart from leader of opposition in outgoing assembly T S Singh Deo (66), OBC leader Tamradhwaj Sahu (69) and party veteran Charan Das Mahant (64).

For Rajasthan and Madhya Pradesh, one view within the party is to go ahead with the veterans like Gehlot  and Nath, who is 72, as safer options keeping the 2019 Lok Sabha elections in mind, while others are rooting for young turks like 47-year-old Scindia  and Pilot to send across a message of change.

Some party sources indicated that the Congress was also toying with a formula to have deputy chief ministers in these two states.

Hectic parleys also continued till late Thursday evening among top party leaders for deciding the chief minister for Chhattisgarh, where Congress has got a clearer mandate than the other two states.

While Rahul Gandhi met the party's central observers -- K C Venugopal for Rajasthan and A K Antony for Madhya Pradesh -- to seek their inputs on views of newly-elected legislators in the states, he separately met Gehlot, Pilot, Nath and Scindia at his Tughlak Lane house.

"We are checking, taking inputs from different people in the party. We are taking inputs from MLAs and workers. We are getting a comprehensive answer to what the Congress party and others feel," Gandhi had told reporters outside Parliament earlier in the day.

Sources said the chief minister for Chhattisgarh would be decided after the central observer for the state, Mallikarjun Kharge, briefs Gandhi about views of the state's party MLAs.

As deliberations continued, supporters of all contenders raised slogans and flashed banners in support of their respective leaders -- outside the party offices in the three states as also outside the house of the top leader in the national capital.

Gandhi had also sought views of party workers through an internal messaging system with a pre-recorded message asking them to send their views directly to him through the application.

Facing his first test within the Congress, Gandhi had started hectic deliberations with senior party leaders early Thursday morning and a final decision was expected by the evening to enable the oath-taking ceremonies at the earliest.

The party has already staked its claim for forming governments in Rajasthan and Madhya Pradesh.