Violence in Bulandshahr over cow slaughter; cop who probed Akhlaq case among 2 dead

Violence in Bulandshahr over cow slaughter; cop who probed Akhlaq case among 2 dead 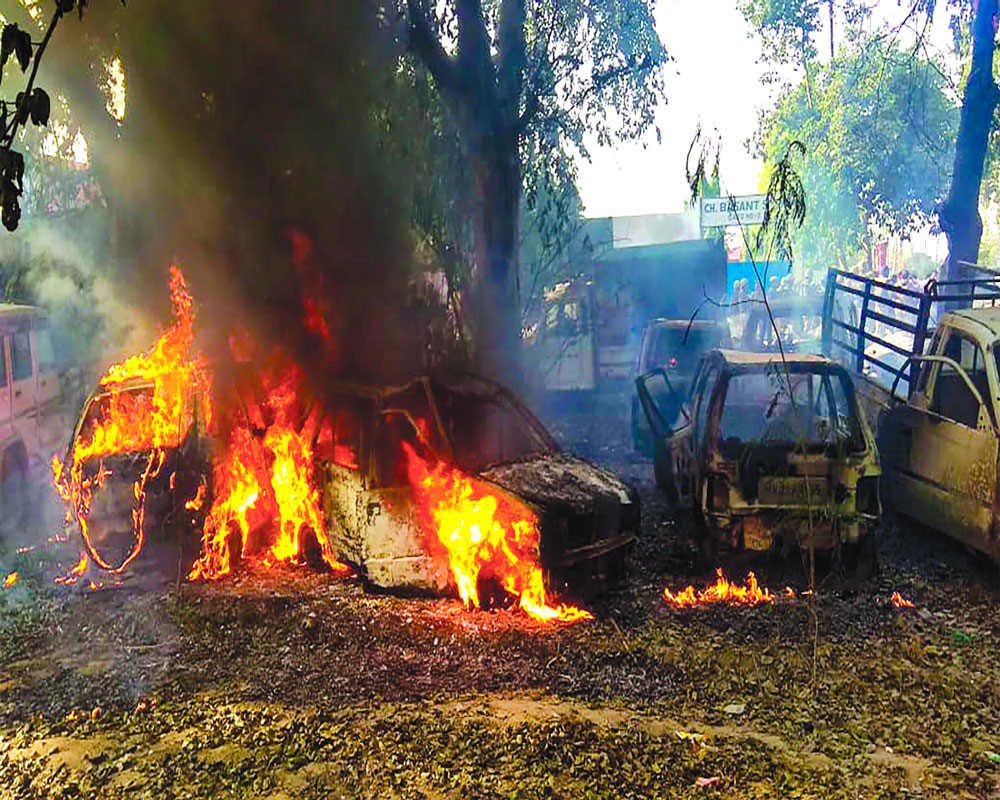 A police inspector, who had probed the Akhlaq lynching case initially, and a youth died of gunshot injuries on Monday as a rampaging mob protesting alleged illegal cow slaughter torched a police post here and clashed with cops, officials said.

Additional Director General (Meerut zone) Prashant Kumar said the protestors from Mahaw village and nearby areas pelted stones on police and indulged in arson, setting ablaze several vehicles and Chingarwathi Police Chowki, after some body parts of cows were found in a jungle near the village, prompting the police to open fire.

Police said there was firing by miscreants also during the clash.

Inspector Singh was investigating officer in the Akhlaq lynching case of Dadri between September 28, 2015 and November 9, 2015, he said, replying to queries from reporters.

The mob lynching of Akhlaq over rumours of cow slaughter and possession of beef in his home had triggered a massive outrage across the country.

As tension prevailed in the area following the violence that lasted nearly three hours, the Uttar Pradesh government deployed additional police, including over 1,000 personnel of anti-riot forces, and ordered multiple probes — by SIT, ADG-Intelligence — and a magisterial inquiry.

Expressing grief over the incident, Chief Minister Yogi Adityanath, who is in Rajasthan for election campaign, said strict action will be taken against the guilty after the probe reports are received.

In Lucknow, the Uttar Pradesh government announced a total of Rs 50-lakh assistance to the kin of Inspector Singh. The government said Rs 40 lakh would be given to his wife and Rs 10 lakh to his parents.

The Congress hit out at the chief minister, saying he should first set his own house in order before "gallivanting" around the country for election campaign.

Giving details of the incident, the ADG (Law and Order) said trouble started this morning when carcasses of the cows were found dumped in a forest area outside Mahaw village.

"Activists of right-wing organisations soon gathered at the spot and alleged that people of a community were indulging in cow slaughter," he said.

Angry villagers and members of various Hindu groups brought the animal remains in a tractor-trolley to the Chingarwathi Police Chowki and demanded action against the culprits.

They raised slogans against the police administration and blocked the Bulandshahr-Garh State Highway.

Bulandshahr District Magistrate Anuj Kumar Jha, Sub-divisional Magistrate Avinash Kumar Maurya and other senior officials tried to reason with the protestors but they refused to budge.

"The entry of the bullet is near the left eyebrow. As per PM report it appears to be a .32 bore," the ADG (law and order) said.

"It is clarified that Subodh Kumar Singh was investigating officer of the Akhlaq lynching case of Dadri from September 28, 2015 till November 9, 2015. Charge sheet was filled in the case by a different investigation officer in March 2016," he told reporters.

Kumar said the ADG-intelligence has been asked to submit a report in 48 hours which will throw light on circumstances of his death.

Akhlaq was lynched in 2015 by a mob that had barged into his residence in Dadri following rumour that he stored beef in his house after slaughtering a calf.

A video showing the body of a policeman slumped to ground from the seat of a police vehicle surrounded by some people came to light after the Sunday incident. But the police refused to confirm if it was of inspector Subodh.

However, a senior police official requesting anonymity said, "In all likelihood, it appears to be Subodh Kumar's."

The ADG (law and order) said additional reinforcements -- 500 personnel of Rapid Action Force and 600 personnel of Provincial Armed Constabulary -- were rushed to the spot of violence and the situation was under control.

DM Jha said, "Some people took the bodies of the animals and tried to block the road. The policemen were attacked when they tried to get the road opened."

The violence started at around 10 am in Siana area in the district where a major three-day Islamic congregation had concluded this afternoon. The police warned against attempts to spread any misleading information, saying the incident was not related in any way to the congregation.

"The incident occurred 40-50 km away from the congregation site. Some miscreants were behind the violence and action is being taken against them in accordance with law," the Bulandshahr Police tweeted in the evening.