From the kangaroo land

From the kangaroo land 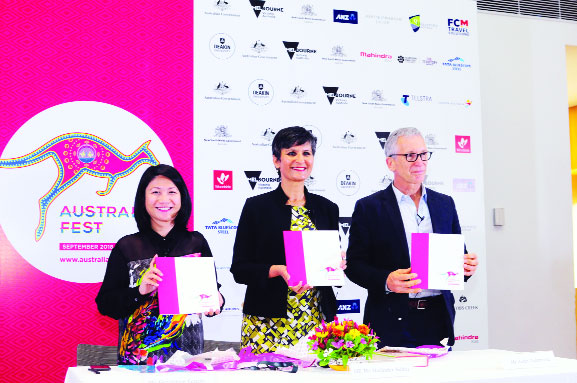 Borders, oceans or mountains might separate different nations. But cultures and traditions can be a unifying force. The Australia Fest 2018 aims to do just that as it travels across India for six months, says Team Viva

The Bangarra dance troupe, Australia’s most prominent orchestra band will be there and so will the Melbourne International Comedy Roadshow with many more internationally-acclaimed performers, artists, comedy lovers, dancers, musicians and all kinds of troupes. The Australia Fest 2018 will give a glimpse of the country’s culture and arts as it pans out across 20 Indian cities for 203 days with 75 events and 26 projects, from September 2018 to March 2019.

The Australian High Commissioner to India, Harinder Sidhu, while unveiling the six-month long festival said, “Children to parents, families and friends — there’s something for everyone in this fest. Australia’s culture, creativity and dynamism will be on display and will feature food, film, art, dance, music, literature, theatre, sports and much more.”

Sidhu added, “Even though there are more than 60,000 Indian students studying in Australia, we still can’t showcase the country’s culture to all of them. So if we can’t bring India to Australia, why not bring Australia to India? And this is what we are doing—merging nations and developing ties between both the countries, if not politically, but culturally.”

Sidhu disclosed that the plan to have such a large-scale festival “was to be executed in 2017,” as they had decided that there should be a span of five years between the festivals and the first was held in 2012. And there were reasons. While they did manage to get many of the prominent artists on board, getting them to perform was a long process. As Sidhu revealed, “Bookings for certain performers couldn’t be made in time. Even for their show this year, we had already made the bookings three years ago, especially with the Bangarra dancers, who follow really strict schedules.” The dancers will be the centrepiece of the fest who will be performing in Bengaluru, Delhi and Mumbai.

MasterChef Australia Gary Mehigan, who will be travelling to the country to create a fusion of food from the two countries. “Across the world, only Indians are so passionate about food and flavours,” said Mehigan who is also the Ambassador of Australia Fest.”

He explained how he has explored Indian flavours and married them with Australian food to give it a desi as well as a slightly spicy touch. He said, “When it comes to cooking and playing with flavours, it is not just north Indian or Punjabi flavours but all kinds of Indian spices and innumerable textures that I like to use. Whether it is vegetables or the breads, the Indian meals have a lot of variety and tastes. Blending such multiple ingredients could be crazy, but it’s just so delicious and comes together beautifully.”

The launch session was also attended by renowned Australian author, John Zubrzycki, whose latest book Jadoowallahs, Jugglers and Jinns: A Magical History of India is a cultural, social and political history of the streets and stage magic in the country. He said, “I’m particularly excited in being involved in this year’s event with my book that examines the influence of India’s vibrant magical traditions on popular culture globally.”

Among other great attractions are the food talks and sessions with MasterChef Australia judge Gary Mehigan, fusion of modern Australian jazz with West Bengali folk music by The Three Seas, a showcase of collections by Australian fashion designers using Indian handloom textiles at Amazon India Fashion Week, the Melbourne International Comedy Festival Roadshow featuring some of Australia’s wittiest comedians, the best of Australian cinema at various film festivals across India, the launch of the Australian Open International BallKids programme in India, and much more.