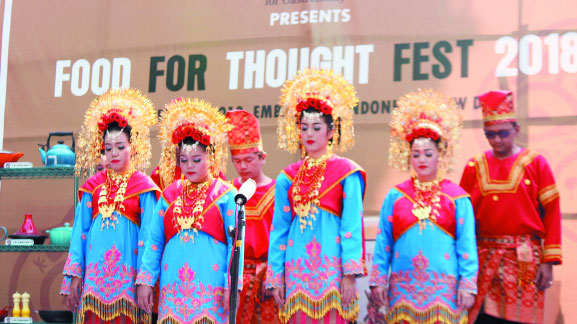 A one-of-a-kind initiative, that focuses on the common heritage and history of the South Asian region, and the unique influences that make up a part of it—the ‘Food for Thought Fest’—has set a benchmark as a forum for conversations, cuisines and the exchange of ideas and philosophies.

Organised by the South Asian Association for Gastronomy (SAAG), the forth edition of this extravaganza recently concluded at the Embassy of the Republic of Indonesia and saw participation from countries like India, Indonesia, Afghanistan and Bangladesh.

The  Ambassador for the Republic of Indonesia to India, His Excellency Sidharto R Suryodipuro, said “We are really happy to host the Food for Thought Fest at the Embassy. This fest is a good way to promote both Indonesian culture and tourism. Inviting countries from Asia here at the fest is the best way to bring in more harmony via food.”

At this year’s edition, the ‘Thought Fest’ saw discussions between experts around culture, health and cuisine, and the ‘Food Fest’ offered cookery workshops with celebrity chefs from the participating countries and Indian television celebrities like Puja Talwar, Advaita Kala and Imam Siddique. Food stalls by some of the most superlative restaurants from the South Asia region like the Soda Bottle Opernerwala, Atara Catering, Chaat Chowk and Orza sprawled the landscape. Other attractions included a ‘Bazaar Section’ and a ‘Fun Fest’ which saw performances by music bands like the Delhi Indie Project and the Rocknama.

The founder and director of SAAG and Food for Thought Fest, Maneesh Baheti, said, “We are very honoured to be given the opportunity of kick-starting the 70 year celebrations of India-Indonesia friendship with this fest. The confidence bestowed on us by the Indonesian Ministry of Tourism, the attendance of a 16 member troupe for cultural performances and the Masterchef from West Sumatra, gives us tremendous encouragement.