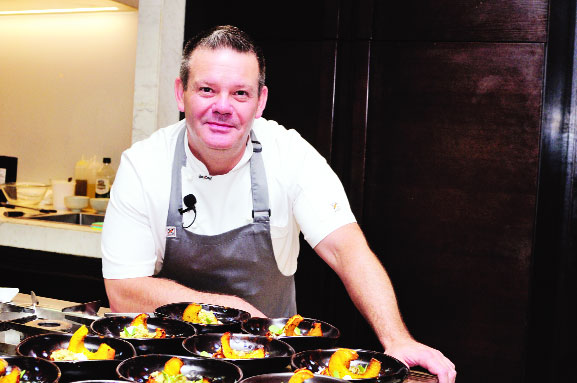 Gary Mehigan is not just a chef but a palate specialist. Something that he has learnt growing up with his mother, something that inspires him to cook even at home and something that makes him a patient dad, who has been making burgers for his daughter just so that she doesn’t drop in at McDonald’s. By Team Viva

Australian superchef Gary Mehigan doesn’t carry a chip on his shoulder despite the supreme artistry with which he combines the strangest ingredients from around the world to prepare a simple dish that is immensely rich in flavour and textures. So you don’t feel like a student in his masterclass , rather a spectator in a play who in the end becomes a character as he draws you into conversations, nudging you to ask him anything under the sun. And that’s comforting. “I always like to have conversations with people milling around a table as I cook,” he told his audience assembled at Hyatt Regency, Delhi.

Over the weekend, he hosted a live session and presented a sit-down dinner as part of the Australia fest where he focussed on high-quality and sustainable products from southern Australia  to the accompaniment of the best New World wines. He started with how Australian food was once considered as about meat and some vegetables on the side but had now emerged to absorb every influence from around the world, particularly strong spices and southeast Asian accents. “Australians love a balanced mix of flavours and textures. The meat has to be a bit crunchy, sweet and sour. It doesn’t matter whether it is southeast Asian, Mediterranean or Western,” he told guests, elaborating on how each speciality restaurant was really about absorptive global flavours. His roasted pumpkin, which looked like a quiche done over with a sprinkling of honey candied walnuts and green wheat, lifted a basic vegetable to a signature. But that’s Mehigan for you, extracting the best flavour combinations from just a few ingredients that you would assume took several permutations and combinations.

He even surprised us with king fish, normally fried in Goan interpretations because of its sharp “fishiness.” But Chef Mehigan kept it slice-fresh with avocado, topping it with Japanese furikake (mixture of dried fish, sesame seeds, chopped seaweed, sugar, salt, and monosodium glutamate), the citrusy yuzu mayonnaise and garlic chips, making for a crunchy freshness that is subtle and light at the same time. Mehigan can toss about ingredients from across the world simply because he immerses himself in them when travelling. So over his several visits to India, he has eaten local and taken to tandoori delights and the South Indian staples. Only recently, he has discovered the wonders of black pea in chhole kulche.

But it is with the roasted mulwarra lamb rump that the chef stole the show. He patiently waited for the lamb to slow-cook, prodding it but just once now and then, explaining why roasting a lamb should be such that it is roasted exactly in a manner that it’s blushing pink inside, or long and slow, so it’s ultra tender. He even educated us on the importance of resting time for the roast so that the juices could be evenly redistributed to each pore of the meat and how he still considered his mother’s tips the best. “My mother would rest the roasted meat by closing all doors and windows and let the residual atmospheric heat do the job,” he said. A simple trick to prime the meat as it were.

Then he drizzled black olive jus gras over it. But what we weren’t prepared for was the way he rested it on a spiced carrot puree, zested up with cinnamon and clove with the much-needed caramelised element he talked about. He paired it up with spinach and feta gozleme, a flattened samosa if you like with a creamy veggie mush that you perhaps would not have had if it were served as is.

And just when you thought you have had the perfect fill, Mehigan laid out the almond and native honey friande with pickled blueberries and yogurt ice cream. Not too sweet, not too overbearing or heavy, not too bready but oozing enough to make you want more.

Mehigan is not just a chef but a palate specialist. Something that he has learnt growing up with his mother, something that inspires him to  cook even at home and something that makes him a patient dad, who has been making burgers   for his daughter just so that she doesn’t drop in at McDonald’s. And this is what keeps him invested in his art, one that does away with homogenisation and looks for indigenous revival.