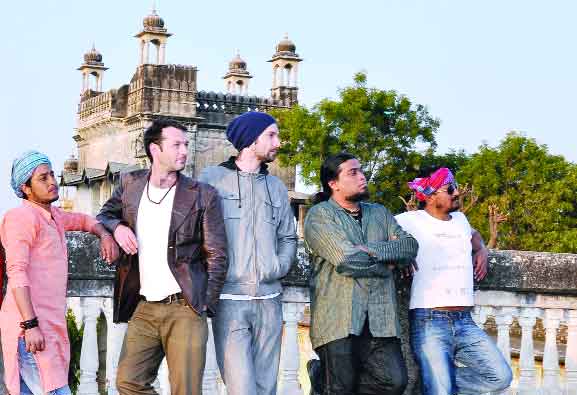 As director Matt Keegan and his band, The Three Seas, performs in India, he tells Chahak Mittal that to combine diversities, it is important to first understand they are distinct in separateness

A hint of traditional Baul music, originally performed by the mystics from West Bengal and Bangladesh is combined with a bit of contemporary Australian Jazz, Rock and Western production aesthetics. The resultant fusion sometimes has a wholeness that’s difficult to believe. And that is what makes The Three Seas stand out.

Often we hear of people coming together from various parts of one country to form a collaboration but this band has stretched further and features people from different countries and origins to create one spectacle. The band, currently on its six-city India tour, is a book of many stories and formed by numerous cultures.

It’s artistic director Matt Keegan’s sixth visit to India the first being in 2009 when he found the country’s culture to be full of colours and variations. He was particularly attracted to the music that “revives traditions in every manner.” He narrates, “The mother of one of my friends in school belonged to Kolkata, West Bengal. She invited me to India and I visited the countryside of Santiniketan where I met the musicians that today are a part of this team.” When he met them he realised that this could be the beginning of a band that could combine various traditions and arts creating some really good and soulful music.

There is singer Raju Baul who brings in the nomadic tribal culture of Bauls and is known for his mastery of khamak and its rhythms. Darjeeling-born singer of Nepalese origin, Deo Ashish Mothey can produce intricate riffs in Himalayan style through instruments like the dotora and the esraj. Gaurab Chatterjee, the fourth band member is a drummer from Kolkata and Matt describes him as the “crazy one” as he creates all sorts of “Bengali percussion beats and amusement on the stage” through dubki (hand drum). The fifth is Australian double-bassist Steve Elphick, the master of jazz and fusion, who is responsible for “uplifting the musical alchemy” of The Three Seas.

While the saxophonist Matt introduces all the four members of the band, we wonder, how do such diverse musicians and their instruments make one music together? He answers that we really have to understand our differences and combine them into one. “There are three things. Even if we are different, there is something that is always similar. The first thing that we need to do is find that one similar thing and start from there. Second, lies in the intention of the musician. Each musician has to feel it and say that he wants to work and make it happen. Third of all, to fall in love with the idea. We need to find what works and spot differences among us. If Jazz is a little improvised, Baul is more traditional. Then there is Nepali music which is also different from Bengali. But its idea is new and revolutionary, but hard. We just need to flow in and strategise. Everyone should be open to the process,” he says.

So how has the band evolved over the course of 10 years now?

Matt believes that it has come a long way after overcoming many challenges. He says, “It has developed in many ways and has matured. When we first met, we didn’t know how to do it. We tried and even though all the things didn’t work out, some of them did. But not everything can go in place when you have just begun, right?”

It was only when they started realising that in order to combine such diversities it was essential to understand that they are diverse, that the music fell in place. “This band is a result of the spirit of individual musicians working as a team and it has taken a long time.”

He says that one of the major challenges was communication because of language barriers. Initially, they usually never understood each others’ concepts and perspectives. “We are also from very different parts of the world and speak different languages. We had to work on what the other person is saying. We have to get an understanding of how we function at individual levels. Now that we are more like friends, we laugh at the times when we struggled to understand each other.” He says that it was really “tricky” as it created confusion because “you think that he is talking about something but the other person is thinking about something else. However, differences could be confusing but also funny and interesting. It gets boring otherwise.”

He recalls his first album Haveli that was shot in Rajasthan, India, that marked their first bonding.

Matt says that music has become much more accessible than it ever was. It is easier to get hold of favourite tracks and musicians. And with the growing accessibility, there are also many more opportunities for musicians. “You can always showcase it on a platform where people can easily access it. There are more ways to find music and connect with a larger audience. This is one way in which music industry has really evolved. It has made things easier to some extent. It’s still hard though because now there is a lot to explore.”

The world has become flatter, thanks to social media. And as more and more people find online platforms, we question, was it easier for people earlier to showcase their talents when there were no such platforms and a lesser level of competition? “In some ways, it is easier for the talented people to come up but it also enables the less talented ones,” Matt points out and adds, “The flowers still bloom but take a lot of time and now the problem is that they can also give people false hopes.”

He believes that people today try to imitate established artists but that doesn’t always work. “They think that maybe ‘I can do it too,’ but maybe they cannot because it’s really hard to get noticed for your work when everyone is coming up with similar elements. But all you need is persistence because the traditional pathways have changed.”

The band has already made Kochi, Delhi and Mumbai groove to its tunes and they tell us that even though they keep the same set and sequence of the music to be presented, they find different connections everywhere. The reason is regional influence. He believes that this always draws one in. It’s different at different places because of their vibe and it’s not as they try to make it different but it just comes naturally.

“We play the same set, different jokes though,” laughs Matt.

He says that they try to find a commonality by making the audience laugh about cricket matches between Australia and India because “we need to make some connections outside of music too right?”

(They will be performing in Kolkata, Kalimpong and Siliguri now.)